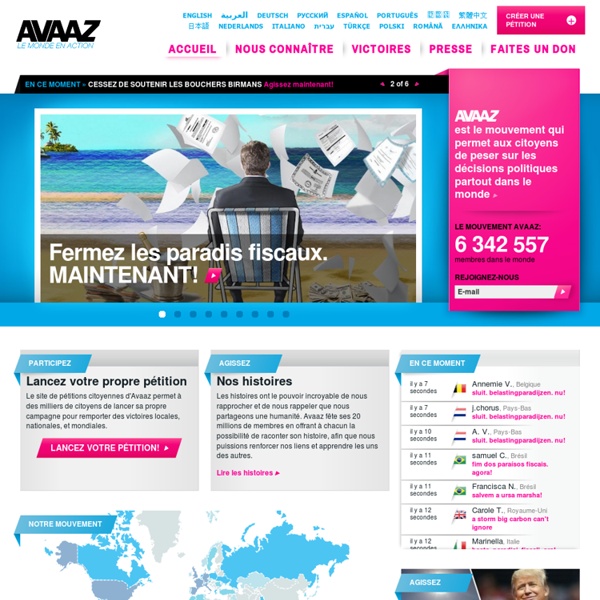 ISRAEL, GAZA: Holocaust survivor explains why she became Palestinian rights activist Hedy Epstein is what some might see as a contradiction in terms: a survivor of the Holocaust and also a staunch advocate for the Palestinian people. Born in 1924 in Freiburg, Germany, Epstein was 14 when she escaped from Nazi persecution via the Kinderstransport to England. Since her 1948 arrival in the U.S., Epstein has been an advocate for peace and human rights. In 2001 she founded the St. 1 Million to Ban the Lion Trade 439,759 have signed. Help us get to 1,500,000 Update: 31 October 2013 Amazing win! A South African court just ruled that the government violated our right to free speech when they tore down ads calling for the protection of South Africa’s lions -- and we’re all over the news. Let’s use this momentum to get our petition to 1 million and save the lions.

How To Build A Vertical Garden Pyramid Tower For Your Next DIY Outdoor Project Having the correct planting space is usually a problem when trying to plan your new garden layout. If you don’t have enough room to plant this year try going vertical. This DIY Garden Tower Planter (strawberry planter) will give you the extra gardening and planting space you need. This is a great DIY Garden Project but because of the compound angles that need to be cut, it requires a compound miter saw which does take some skill to use correctly.

untitled SKYGUARDS is an international civic platform created to take action against weather modification activities such clandestine aerial spraying, as they constitute a threat to public health, and to life on the planet. Within this perspective it will promote synergies with other groups at a global level to give global answers and put an end to this horror. Our focus will be on political action, research, evidence accumulation, court reporting, awareness rising, and social opposition. Skyguards has no political or religious affiliations. It does not entertain conspiracy, mystical, paranormal, or climate change theories. It engages exclusively in confronting the facts and consequences of geoengineering and taking action at all possible levels.

Kubatana.net speaks out from Zimbabwe Change starts with us. Right? Posted on February 11th, 2014 by Bev Clark. Filed in Uncategorized, Zimbabwe Blog. Comments Off The Anti-Zionism of Fools However distorted and exaggerated, antisemitism is a real current in France that needs to be confronted. A new holocaust. Kristallnacht. A massive ray of hope on climate 381,370 have signed. Help us get to 750,000 Update: 7 February 2013 This petition was handed in to the US and EU in autumn 2012. The US slapped on tariffs, but the EU launched a consultation and now plans several meetings on solar trade with the US and China. Let’s keep growing our call, and we will deliver it at these key moments until our message is heard.

HACKNEY COUNCIL: Stop criminalising Hackney's rough sleepers Hackney Council's new "Public Space Protection Orders" will give police and council officers the power to ban "anti-social" activities such as sleeping rough or begging. Those who breach an order could be issued with a £100 fixed penalty notice or a fine of £1,000. As homeless charities have pointed out, this will criminalise the homeless who are already vulnerable. It is absurd to impose a fine of £1,000 on somebody who is already homeless and struggling. People should not be punished for the "crime" of not having a roof over their head - there is nothing inherently "anti social" or criminal about rough sleeping. Criminalising rough sleeping privileges the appearance of Hackney and the convenience of customers over the damage caused to the vulnerable and homeless.

Innovations: Technology, Governance, Globalization Philip E. Auerswald and Iqbal Z. Quadir, Editors Resisting Nazis, He Saw Need for Israel. Now He Is Its Critic. Photo THE HAGUE — In 1943, Henk Zanoli took a dangerous train trip, slipping past Nazi guards and checkpoints to smuggle a Jewish boy from Amsterdam to the Dutch village of Eemnes. There, the Zanoli family, already under suspicion for resisting the Nazi occupation, hid the boy in their home for two years. The boy would be the only member of his family to survive the Holocaust.

Save the world's best bank 91,076 have signed. Help us get to 750,000 Posted: 7 October 2012One powerful woman is threatening the future of millions of others. But if we all weigh in right now we can rescue the people-powered bank that’s an inspiration to the world. The Grameen Bank has enabled millions of women to lift themselves out of poverty by giving them tiny loans to buy animals or equipment to start earning money.