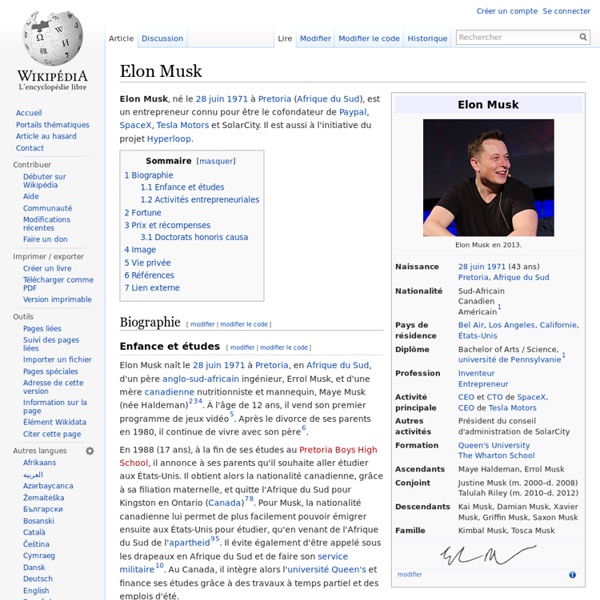 Tesla CEO Elon Musk Elon co-founded Tesla and continues to oversee the company's product strategy -- including the design, engineering and manufacturing of more and more affordable electric vehicles for mainstream consumers. As Chairman and Product Architect, he helped design the ground-breaking Tesla Roadster, for which he won an Index and a Global Green award, the latter presented by Mikhail Gorbachev. In October 2008, he took on the additional responsibility of CEO, overseeing daily operations as the company was ramping up Roadster production and accelerating the development of its second vehicle, the Model S. Elon launched Tesla's regional sales and service centers across two continents and in May 2009 secured a $50 million investment and strategic partnership from Germany's Daimler. Elon has been fascinated by electric cars for two decades. In July 2011, Musk donated $250,000 via the philanthropic Musk Foundation to fund a solar power project in the city of Soma, Japan.

Client Portfolio - Government Solar Installations and Customer Case Studies A solar power system is customized for your home, so pricing and savings vary based on location, system size, government rebates and local utility rates. Savings on your total electricity costs is not guaranteed. Financing terms vary by location and are not available in all areas. $0 due upon contract signing. No security deposit required. A 3 kW system starts at $25-$100 per month with an annual increase of 0-2.9% each year for 20 years, on approved credit. SolarCity Corporation will repair or replace broken warranted components.

How did Elon Musk become so successful Headline: Elon Musk reveals details of rapid transit "Hyperloop" system SolarCity CEO Elon is the Chairman of SolarCity, the leading residential solar provider in the U.S. In addition to his role at SolarCity, Elon is also the co-founder, chairman and CEO of Tesla Motors, an all-electric American car company. As Chairman at Tesla Motors, Elon helped design the ground-breaking Tesla Roadster, for which he won an Index and a Global Green award, the latter presented by Mikhail Gorbachev. Elon is also the founder and CEO of SpaceX - a space launch vehicle company. Prior to SpaceX, he co-founded PayPal, the world's leading electronic payment system, and served as the company's chairman and CEO. Elon's commitment to renewable energy extends beyond his roles at SolarCity, Tesla Motors and SpaceX.

Health: Nutrition 18 June 2014Last updated at 16:26 The human body needs a balanced diet to deliver vital nutrients What's your idea of a perfect meal? Sushi? Cutting through the myriad of diet plans and faddish eating regimes, the human body needs a balanced, healthy eating plan to keep functioning properly. Grow and build Repair and heal Reproduce successfully Repel illnesses and infections Avoid weight-related health problems Eating a variety of foods can also reduce the risk of getting conditions including heart disease, stroke, some cancers, diabetes and osteoporosis. The foods we need to eat can be divided into five separate groups. The reason we need a diet drawn from all of the groups is that they all deliver different, but vital, nutritional benefits to our bodies. Fruit and vegetables are one of our main sources of vitamins and minerals, which the body needs to perform a variety of functions well. Starchy foods, also known as carbohydrates, are where we get most of our energy from.

Elon Musk at TED2013: Transforming transportation Photos: James Duncan Davidson The cofounder of PayPal, Elon Musk has become one of his generation’s most aggressive, not to mention successful, entrepreneurs. As CEO and product architect of Tesla Motors and CEO and CTO of SpaceX, his interests clearly lie in transforming transportation and creating an economy built on sustainable energy. Now he takes the TED stage to tell us more. First, he talks about the genesis of Tesla, his realization while still at university that the development of a sustainable energy system is critical to the ongoing existence of humanity — and therefore a problem worth tackling. Musk clearly isn’t going to talk about his recent spat with the New York Times, but he does want to talk about the range of the car. But Musk isn’t just here to talk about Tesla. And so to SpaceX, a project Musk jokes might well prove to be the fastest way he can lose his fortune. The real innovation of SpaceX is to build a reusable rocket.

With SolarCity IPO, Elon Musk May Get Clean Tech Right Over the past few years, Silicon Valley has pumped hundreds of millions of dollars into a vast array of “clean technology” companies. You probably can’t name many of them because, on the whole, they’ve been tremendous failures or totally underwhelming. Companies participating in particularly difficult areas such as solar have turned into laughingstocks and symbols of huge investments gone wrong. There does, however, seem to be one person getting quite wealthy off green technology, and that’s Elon Musk, the chief executive of Tesla Motors (TSLA) and the chairman of SolarCity (SCTY). “It’s possible that Elon’s two clean-tech companies will be the two most successful clean-tech companies in the U.S.,” said Peter Thiel, the entrepreneur, investor, and Facebook (FB) board member in an interview earlier this year. What makes Musk’s clean-technology empire intriguing are the ways in which he intertwines the businesses. Both Tesla and SolarCity have their challenges.

Elon Musk on the future of the future LONG BEACH, CA—Taking the stage during today's "Dream!" session at the TED2013 conference, Elon Musk, CEO of Tesla Motors and SpaceX, sat down with TED curator and host Chris Anderson to discuss his serial entrepreneurship and vision for the future. Anderson started with the obvious. “Why try to build an electric car?” Musk said he believes it's an imperative. Musk also believes that electric cars are now practical for many customers. The CEO doesn’t believe that natural gas and coal are going to take us into the future, either. Musk discussed one nascent solution that could solve the cost problem: consumers could lease solar panels on their roofs at home, paying less than they would on their power bill otherwise, while the installation companies will be able to run the mass of leased panels as a distributed grid. Curiously, Musk did note that there is one technology that isn't likely to ever go electric and benefit from solar. So why start a space company?