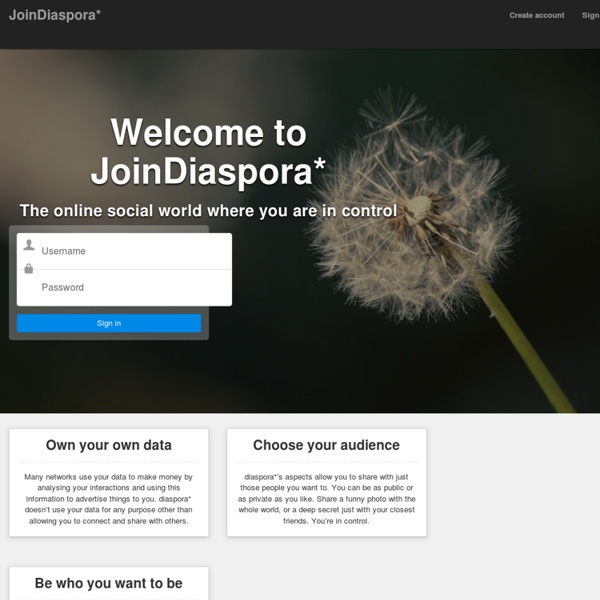 ASMALLWORLD Forgot Username / Password? Interested in Membership? » Autumn's Coming: Events to Banish post-Summer Blues by Editorial Staff 10 Beautiful Social Media Infographics This series is supported by Ben & Jerry's Joe, Ben & Jerry's new line-up of Fair Trade and frozen iced coffee drinks. Learn more about it here. Infographics help communicate information in a digestible manner as they creatively present data in an understandable and engaging format. With social media growing at an ever increasing pace, there is now a wealth of data about how people interacting with one another on the web. Naturally, infographics have proven an excellent aid in expressing high volumes of social web information in a clear, visually appealing manner.

Problem solved (probably) « Gowers's Weblog Without anyone being particularly aware of it, a race has been taking place. Which would happen first: the comment count reaching 1000, or the discovery of a new proof of the density Hales-Jewett theorem for lines of length 3? Very satisfyingly, it appears that DHJ(3) has won. If this were a conventional way of producing mathematics, then it would be premature to make such an announcement — one would wait until the proof was completely written up with every single i dotted and every t crossed — but this is blog maths and we’re free to make up conventions as we go along. So I hereby state that I am basically sure that the problem is solved (though not in the way originally envisaged). 10 Powerful Tips to Increase Fan Engagement on Facebook Facebook is the social network preferred by most businesses when planning and implementing their social media marketing strategy. Even though Twitter and YouTube are large social media networks, Facebook provides a marketing ecosystem that is multi-media rich and broad. There are literally tens of thousands of apps that can assist business with marketing on Facebook. Even though it feels like Facebook has been part of our lives forever it must be noted that Facebook “Pages” for Business have only been with us for barely 3 years! Business is Still Learning How to Use Facebook

The Value of Social Media [STATS] Social media plays an important role in our lives and has drastically changed the world in ways more than one; It is now one of our important platforms of communication – we live and breathe it everyday, we rely on them for information and may even feel awkward not checking our Facebook account for notifications for 24 hours. Whether B2B or B2C, every industry is able to leverage on social media for their business. As people spend more time on social media online, ad dollars into social networking sites have also been increasing. That is why businesses need to always be ahead of the curve. If your competitor is already on board, you have much catching up to do!

Polymath1 and open collaborative mathematics « Gowers's Weblog In this post I want to discuss some general issues that arise naturally in the light of how the polymath experiment has gone so far. First, let me say that for me personally this has been one of the most exciting six weeks of my mathematical life. That is partly because it is always exciting to solve a problem, but a much more important reason is the way this problem was solved, with people chipping in with their thoughts, provoking other people to have other thoughts (sometimes almost accidentally, and sometimes more logically), and ideas gradually emerging as a result. Incidentally, many of these ideas are still to be properly explored: at some point the main collaboration will probably be declared to be over (though I suppose in theory it could just go on and on, since its seems almost impossible to clear up every interesting question that emerges) and then I hope that the comments will be a useful resource for anybody who wants to find some interesting open problems. Like this:

Decentralize the web with Diaspora by Daniel G. Maxwell S. Raphael S. Ilya Z. We're fully funded! Check out some of the other great projects on Kickstarter Diaspora - the privacy aware, personally controlled, do-it-all distributed open source social network We are four talented young programmers from NYU’s Courant Institute trying to raise money so we can spend the summer building Diaspora; an open source personal web server that will put individuals in control of their data. What is it? Enter your Diaspora “seed,” a personal web server that stores all of your information and shares it with your friends.

Fish: Search FishBase Associated Journal Publish in our journal partner Acta Ichthyologica et Piscatoria the results of your primary research on fishes about growth, weight-length relationships, reproduction (maturity, fecundity, spawning), food and diet composition, introductions and range extensions for faster subsequent entry in (2011 impact factor: 0.547). Indexed Journal US college blocks Facebook and Twitter in social experiment It is perhaps inevitable given the rise of social networking sites such as Facebook and Twitter that the number of places blocking access to them is also growing. Burma, China, Iran, Harrisburg in Pennsylvania, the roll-call goes on and on. Harrisburg in Pennsylvania? Can that be true?

Tim O'Reilly on How the Web is a Sustainability Platform Next month's GreenBiz Innovation Forum focuses on the intersection of sustainability and innovation, including how innovation happens inside large companies. Tim O'Reilly, one of the "innovisionaries" to be featured at the event, has been thinking about such things for a long time. He is largely credited with driving both the open source and web 2.0 technology movements into mainstream concepts. Tim's long-term vision for his company is to change the world by spreading the knowledge of innovators. In addition to O'Reilly Media, Tim is a founder of Safari Books Online, a pioneering subscription service for accessing books online, and O'Reilly AlphaTech Ventures, an early-stage venture firm. Recently, Greener World Media president Eric Faurot chatted with O'Reilly about the web as an innovation platform.