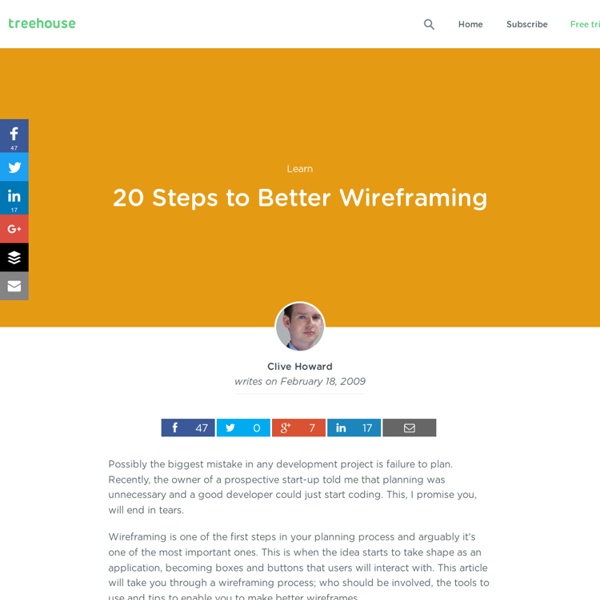 Possibly the biggest mistake in any development project is failure to plan. Recently, the owner of a prospective start-up told me that planning was unnecessary and a good developer could just start coding. This, I promise you, will end in tears. Wireframing is one of the first steps in your planning process and arguably it’s one of the most important ones. This is when the idea starts to take shape as an application, becoming boxes and buttons that users will interact with. This article will take you through a wireframing process; who should be involved, the tools to use and tips to enable you to make better wireframes. 1) Be Clear About Your Objective As a developer I can understand the temptation to jump in and start coding. A wireframe will help you identify many of these issues in a way that is time and cost effective. The process also helps to create a better understanding of the application. 3) Draw on Your Experience You do not need skills in design or development. design Related:  Reading and Listening Material for Final Project Report

Lorem Ipsum - All the facts - Lipsum generator What is the difference between a migrant, a refugee and an asylum seeker? Images of people living in squalor in Calais and traversing the Mediterranean in overcrowded fishing boats have dominated the media in the past few months. Most recently, the full horror of the humanitarian tragedy unfolding on the shores of Europe was brought home as photographs emerged of a lifeless Syrian child washed up on a Turkish beach, after two boats bound for the Greek island of Kos sank. In the ongoing migration crisis, the words migrant, refugee and asylum seeker have been used interchangeably. Migrant The term "migrant" is defined in the Oxford English Dictionary as "one who moves, either temporarily or permanently, from one place, area or country of residence to another". Although the word migrant used to be neutral, some believe the term is now a pejorative used to spread negative connotations of migration and enforce prejudices. The same debate over terminology has arisen over the use of the terms "migration" and "immigration". Refugee Asylum seeker

» A SHORT HISTORY OF THE HIGHRISE | Highrise This post is by Gerry Flahive, NFB Senior Producer of HIGHRISE. Documentaries emerge from the strangest places these days. In March 2012, I was presenting our HIGHRISE project at the Massachusetts Institute of Technology. You might wonder why an esteemed educational institution like M.I.T. – one that has a nuclear reactor on its premises – would be interested in what the National Film Board of Canada is doing to advance documentary storytelling. It was there that I was approached by Jason Spingarn-Koff Series Producer and Curator of Op-Docs, the Times’ innovative home for short-form documentaries – presented in the context of the Op-Docs section, so a place very passionate about docs with a point of view. When we later met in Toronto during Hot Docs, Jason kindly offered to open up the Times’ extraordinary photography archive – the ‘morgue’ to Kat. A multi-phase project Through the research and scripting, animation was another storytelling tool Kat put forward. Look up, way up

The Deeper They Bury Me: A Call from Herman Wallace, 43 Years in Solitary Confinement Never Silenced, Herman Wallace’s Spirit is Smiling –An interview with filmmaker Angad Singh Bhalla By Angola 3 News Canadian filmmaker Angad Singh Bhalla has never shied away from examining politically controversial topics. Bhalla has since co-founded Time of Day Media.and while working as a community organizer for immigrant rights, he produced videos for the Service Employees International Union, Working America, the Center for Constitutional Rights and other groups. Bhalla’s debut feature documentary was the 2012 film Herman’s House, about Herman Wallace of the Angola 3 and the collaborative project Wallace worked on with artist Jackie Sumell, entitled The House That Herman Built. In this interview, filmmaker Angad Singh Bhalla discusses his latest film, The Deeper They Bury Me, while also reflecting upon his 2012 film Herman’s House, his personal relationship with Wallace and more. Angola 3 News: Can you please tell us how you first heard of Herman Wallace and the Angola 3?

Projects User Experience Analysis Character Design Part 1 Character Design Part 2 Processing Game Data Journalism Branching Documentary Linear Documentary From Virtual Reality to Interactive Documentaries: 'Senso "It's like the early days of any medium where artists were inventing the content and the form at the same time." FoST/Google Cube "Google Cube" READ MORE: Straight From Sundance, Vincent Morriset's Immersive 'Way to Go' Is Free Online Conceived and organized by Future of Storytelling (FoST), "Sensory Stories," a new exhibition at the Museum of the Moving Image (MoMI) in New York City, will introduce audiences to innovative new methods of engaging with visual narratives. The exhibition, which will run from April 18–July 26, 2015, provides a unique and enthralling experience, showing off fascinating new technologies and demonstrating their storytelling value in the process. A New Way to Tell Stories FoST/Parade "Parade" "One of our goals .. is to bring the newest technologies to the community to inspire them to think about how they are going to use them," explained FoST founder Charles Melcher at a press preview for the new exhibit. Navigating New Technologies FoST/Bear 71 "Bear 71"

StoryLab: ARTE5901-02 Special Topics: StoryLab, Spring 2016 Gaza Sderot, a project by arte.tv, is a powerful, interactive online documentary about everyday life in two cities torn by war. We learn how the people’s lives are intertwined. It’s an important reminder and meaningful departure from the regular news of… The And documentary is part of a series of works by collective The Skin Deep, headed under director Topaz Adizes as part of an effort to help examine and reframe the human condition in a post-digital age. It’s like an Amazon of public records. As an undergrad a sensitive awareness of how technical limitations and the particularities of the construction of some hardware kindled as we learned of the various hacks different pioneers formulated to make the most of very limited hardware power. We don’t need journalists anymore. Have you ever used a documentary? The first feeling you get when you step into this interactive website is the immediate onset of seasickness. The saying goes that a picture tells a thousand words.