An Advanced Guide to HTML & CSS 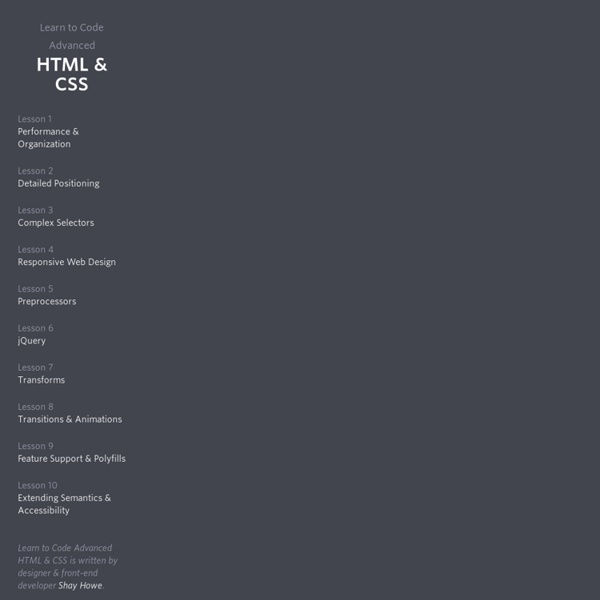 Learn Web Design - Educational Resources Tutorials & Guides Free or Low Cost Keep your hard-earned dollars in your pocket Text-Based Complex Selectors - Learn to Code Advanced HTML & CSS Lesson 3 Selectors are one of, if not, the most important parts of CSS. They shape the cascade and determine how styles are to be applied to elements on a page. Up until recently the focus of CSS never really touched on selectors. Occasionally there would be incremental updates within the selectors specification, but never any real ground breaking improvements.

CSS Tutorials - CSS Repeating Backgrounds | Jacorre Are you looking for a repeating background using CSS? This tutorial will teach you how to create 3 different css repeating backgrounds: horizontal, vertical and tiled. Let’s start with a horizontal repeating background. This would be a background image that repeats itself left to right. For example, let’s say we want to create the following horizontal bars at the top of a webpage: 40 CSS3 Button Tutorials For Designers In this article, we will go through some hand-picked, awesome tutorials for wonderful buttons you can put on your site using only CSS3. Some of these buttons play with colors, gradients or shapes while others are programmed to animate with hover or click actions, giving effects like it’s being pushed down; extending, shrinking or switching frames to reveal more information. Anything you can think of to do with buttons, there’s probably an example of it here.

Node.js Tutorials and Resources Node.js is increasingly gaining popularity among web developers. Due to all hosting companies Node.js remains the prerogative of dedicated servers and VPS. Actually VPS is a solution that even a small startup can afford. HTML Tutorial Hello. My name is Joe and I'm going to give you a few simple lessons on how to make a Web Page. I must warn you though, this is for "all wet behinda ears" Newbies. If you're at all experienced at this sort of thing, you'll probably find this tutorial a bit of a yawner.

Quick Tip: Understanding CSS3 Gradients Creating an image only for the purpose of displaying a gradient is inflexible, and is quickly becoming a bad practice. Unfortunately, at the time of this writing, they very well might still be required, but hopefully not for much longer. Thanks to Firefox and Safari/Chrome, we can now create powerful gradients with minimal effort. In this video quick tip, we'll examine some of the differences in syntax when working with the -moz and -webkit vendor prefixes. While Mozilla and Webkit generally adopt the same syntax for CSS3 properties, they unfortunately don't quite agree when it comes to gradients. Webkit was first to embrace gradients, and uses the following structure:

CSS Selectors and Pseudo Selectors and browser support This page has not been updated for some time and some of the browser versions are obsolete - I'm working on a better format for the page, so check back every now and then :) The following is a range of CSS tests of the most common browsers' support for selectors and pseudo selectors. The tests includes basic stuff from the good old days of CSS1 and funky stuff from the future (CSS3). Learn HTML and CSS: An Absolute Beginner's Guide This article was written in 2009 and remains one of our most popular posts. If you’re keen to learn more about HTML and CSS, you may find this recent article on the future of HTML of great interest. So, you’re ready to take the plunge and begin to learn how to build your own web pages and sites? Fantastic! We’ve got quite a ride ahead, so I hope you’re feeling adventurous. This information is an excerpt from my recently released book, Build Your Own Web Site The Right Way Using HTML & CSS, 2nd edition.

Stripes in CSS Stripes are pretty easy to do in CSS these days. CSS gradients via the background-image property really got our back. I thought I'd document some variations in one easy to reference place. Normal Colored Diagonal Stripes Diagonal stripes are easy to pull off thanks to repeating-linear-gradient(): Animated SVG vs GIF [CAGEMATCH] SVG can do much more than display static images. Its animation capabilities are one of its most powerful features, giving it a distinctive advantage over all other image formats. They are one of many reasons that make SVG images better than raster images, including GIFs.

How I’m (slowly) moving off the cloud with Nextcloud I bought a Raspberry Pi from Amazon with the goal of moving off of Google Photos to a self-hosted photo backup solution that’s nearly as seamless. My goals for this project: A Nextcloud instance on my internal network which could backup photos from my phoneA VPN to access the server from outside my network with Dynamic DNSAn internal DNS server to allow me to have an internal subdomainSSL/TLS certificate from LetsEncrypt for the internal domain There was one thing I had in mind when coming up with these goals: I didn’t just want my personal cloud to be private, I wanted it to be convenient. My setup First off, here are the things I needed for my setup: