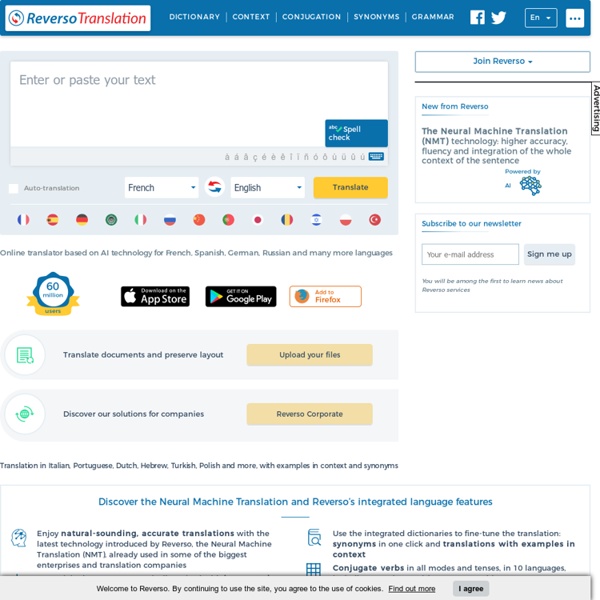 1000 Most Common German Words - Top German vocabulary When starting to learn German, it is always a good idea to memorize the most common words first. You will quickly begin to understand many more situations when compared to learning your German vocabulary from random sources. This page includes a list of most common German words along with their English translation. This list ranks the words according to the body of movie sub-titles. Note that some words represent different forms of the same word and thus can be grouped into a single entry with a higher combined rank. Some of these words include:

order of adjectives Sometimes we use more than one adjective in front of a noun: He was a nice intelligent young man. She had a small round black wooden box. Opinion adjectives: 9 Websites You Can Use to Learn a Foreign Language - StumbleUpon Traveling is a great way to see a country and learn about the people who live there. But if you really want to learn what makes them tick than you need to learn their language. Immersing yourself in a new language can seem like a daunting task. Fortunately, there are great free resources available to turn your first few words into fluency. BBC Languages

Principles of Translation: How Do You Decide Which Word To Choose in a Translation? By Gerald Erichsen Some of the best advice you can get when you start translating to and from English or Spanish is to translate for meaning rather than to translate words. Sometimes what you want to translate will be straightforward enough that there won't be much difference between the two approaches. But more often than not, paying attention to what someone is saying — not just the words the person is using — will pay off in doing a better job of conveying the idea that someone is trying to get across. One example of an approach you might take in translating can be seen in the answer to a question that a reader raised via email: Question: When you're translating from one language to another, how do you decide which word to use?

60 eBooks gratuitos sobre Traducción e Interpretación « infotra 60 eBooks gratuitos sobre Traducción e Interpretacióna Texto completoI nfo T rad 28 de septiembre de 2012 Mapping best multilingual business practices in the EU European Commission. The digital age and globalisation have together changed the European business environment for good. As companies and their employees deal with different languages and cultures on a daily basis, multilingualism can no longer be considered just as an asset or a competitive advantage, but rather as a fact of life. Thus, multilingualism has become a global issue as well as a transversal issue within organisations, since digital communication is erasing national and linguistic boundaries.

How to Master the German Articles-Part II As you have learned in the first article of this series a fair amount of nouns carry an article or better gender-signal with them in form of an ending. But what if a noun does not have such an ending? Luckily there is another technique that will help us to deal with exactly this kind of nouns. Grammar Bytes! Grammar Instruction with Attitude Grammar Instruction with Attitude Home • Terms • Exercises • MOOC • Handouts • Presentations • Videos • Rules • About • Shop • Feedback ©1997 - 2017 by Robin L. SimmonsAll Rights Reserved. valid html

75 Free Language Learning Resources Online Whether you’re trying to learn English, Spanish, French, Portuguese, Japanese, Chinese, Italian –you get the picture – it’s good to get free help along the way. Luckily, there are tons of free online resources out there. Here are 75 to get you started … 1. 101Languages.net – Learn basics like vowels, consonants, phrases and vocabulary for various languages like Arabic, Bambara, Cebuano, Estonian, Icelandic, Latvian and Serbian. 20 Common Grammar Mistakes I’ve edited a monthly magazine for more than six years, and it’s a job that’s come with more frustration than reward. If there’s one thing I am grateful for — and it sure isn’t the pay — it’s that my work has allowed endless time to hone my craft to Louis Skolnick levels of grammar geekery. As someone who slings red ink for a living, let me tell you: grammar is an ultra-micro component in the larger picture; it lies somewhere in the final steps of the editing trail; and as such it’s an overrated quasi-irrelevancy in the creative process, perpetuated into importance primarily by bitter nerds who accumulate tweed jackets and crippling inferiority complexes. But experience has also taught me that readers, for better or worse, will approach your work with a jaundiced eye and an itch to judge. While your grammar shouldn’t be a reflection of your creative powers or writing abilities, let’s face it — it usually is.

English language teaching At Easter it’s our custom (more out of nostalgia than out of any sense of religiosity, it has to be said) to listen to the Lebanese singer Fayrouz singing traditional Easter songs from that region. Here’s a taster: What language is she singing in, though? German Cases, Nominative, Accusative, Dative, Genitive German cases are four: the nominative case (subject of the sentence); the accusative case (the direct object); the dative case (the indirect object), and the genitive case (possessive). Cases are not something strange to English, pronouns for example use a certain kind of cases, for example we say “he speaks”, and “give him” and not “give he”, did you see how “he” became “him” in the second example, well the same thing happens in German, the only difference is that in German it’s much more widely used, not only in pronouns, even nouns/ adjectives/ articles … use the same thing. The German case indicates the role of an element in a sentence. German Nominative The nominative is the easiest case in German and also the one dictionaries use as the standard form of nouns, adjectives, articles…and refers to the subject of the sentence. The teacher went to school, “The teacher” is the subject of the sentence, and therefore “The teacher” is nominative.

About Words - Cambridge Dictionaries Online blog by Liz Walter​ Most of us spend a lot of time talking – in fact a recent study showed that the average Brit spends 6 months of their life talking about weather alone! It’s no wonder therefore that we often need to describe that activity. Unfortunately, simple verbs such as speak, say, talk and tell cause a lot of problems for learners of English. 21 Digital Tools to Build Vocabulary l Dr. Kimberly's Literacy Blog If you follow this blog, you know that I believe effective vocabulary instruction is just about the most important instructional activity for teachers to get right. For lots of reasons. Vocabulary influences fluency, comprehension, and student achievement. How’s that for starters? In addition, a broad vocabulary is important for effective speaking, listening, reading and writing. Vocabulary is a foundational component of an effective K-12 comprehensive literacy framework.