RockCreekFreePress Articles. 12 More Mind-Blowing Documentaries You Can Stream On Netflix. 9/11 Pentagon Attack - Behind the Smoke Curtain - Barbara Honegger. Mission Congo (2013) WATCH: This Sister's Tribute To Her Autistic Brothers Will Make You Rethink What It Means To Be Different  A Better Queue. Yahoo. The 9 Habits of Naturally Thin People They've developed these healthy food and fitness behaviors--and you can too. 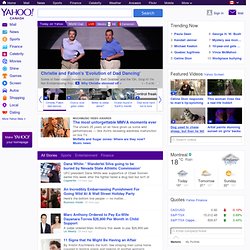 "In countries with low obesity rates, people still eat breakfast, lunch, and dinner and live life in between," says Victoria Moran, author of Main Street Vegan. Call them picky eaters, food snobs, or whatever else, but… Only Russell Brand Can Make A 67-Minute Political Discussion Feel Like A 5-Minute Conversation. New film destroys TransCanada’s sunny Keystone PR campaign. What To Watch On Netflix, Part 3: Overlooked Gems.

Now that I've got the Classics and the Pretty Good Bets lists out of the way, welcome to my list of Netflix's Overlooked Gems. 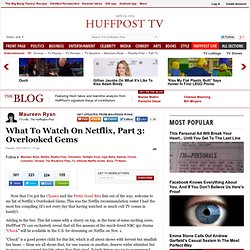 This was the Netflix recommendation roster I had the most fun compiling (it's not every day that having watched so much cult TV comes in handy). Adding to the fun: This list comes with a cherry on top, in the form of some exciting news. HuffPost TV can exclusively reveal that all five seasons of the much-loved NBC spy drama "Chuck" will be available in the U.S. for streaming on Netflix on Nov. 1. "Chuck" is a good poster child for this list, which is all about shows with fervent but smallish fan bases -- these are all shows that, for one reason or another, deserve wider attention but in many cases weren't big hits when they first aired.

Once again, here are the caveats for all three lists: 25 Documentaries Every Arts & Culture Lover Needs To Watch Right Now. We've all sat in front of our Netflix accounts, tirelessly sifting through film and television genres like "Dark Biographical 20th Century Period Pieces" and "Quirky TV Shows Featuring a Strong Female Lead," never quite finding that perfect piece of cinematography. Defeated by your own streaming service, you haplessly watch another beloved episode of "Twin Peaks" thinking this just can't last much longer.

While we won't deny the overwhelming allure of David Lynch, we will give you a list of 25 documentaries every Arts & Culture lover needs to watch. From Dutch prostitution heroines to the man behind Pee-wee's Playhouse to indie gaming to vintage gig posters, these are the historical gems you should be adding to your queue right now. 1. 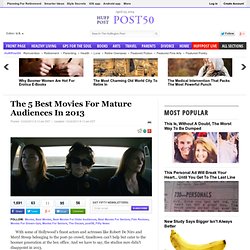 And we have to say, the studios sure didn't disappoint in 2013. Post 50s make up around a quarter of all moviegoers and that number is likely to keep growing, with studios churning out hits like "Gravity" starring George Clooney and "Captain Phillips" with Tom Hanks. They've also gotten the hint that mature moviegoers have a wide variety of interests and don't just want to see the chronicles of aging on screen.

From a hilarious story about a long-married couple, to a dark drama about a dysfunctional family, we've rounded up some of the best movies for mature audiences from 2013. "Le Week-End" As any long-married couple approaching their anniversary, Nick, played by Jim Broadbent, and Meg, played by Lindsay Duncan, are looking to reignite their spark in their now routine marriage. Kidnapped for Christ (2014. Consciousness Science Kept Hidden. Cocokoreena's channel. Evolution - What Darwin Never Knew - NOVA PBS Documentary. 7 Of The Best Movies For Grownups. Hollywood sees you, older moviegoers. 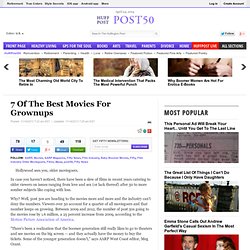 In case you haven't noticed, there have been a slew of films in recent years catering to older viewers on issues ranging from love and sex (or lack thereof) after 50 to more somber subjects like coping with loss. Why? Well, post 50s are heading to the movies more and more and the industry can't deny the numbers. Viewers over 50 account for a quarter of all moviegoers and that number keeps on growing. Between 2009 and 2012, the number of post 50s going to the movies rose by 1.6 million, a 25 percent increase from 2009, according to the Motion Picture Association of America.