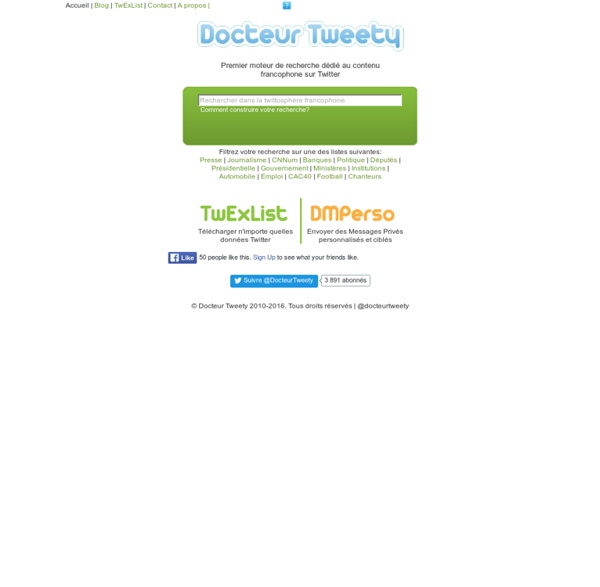 How To Make Animated Gifs - journal - Petra Cross Photography These are my parents. I love them. We had so much fun during the shoot that I found it hard to pick just one good shot from the series of consecutive shots. 5 Fab Twitter Follower Visualization Tools We've brought you a few roundups of some pretty cool Twitter visualization tools in the past, and now we're back with five more for your Twitter-lovin' pleasure. The selection we've curated here concentrates on graphically presenting your followers, contacts and various snippets of information related to them. If you're interested in seeing what your Twitter followers look like as a keyword cloud, on parade, or even on a mug, then have a look at the tools below and let us know your thoughts in the comments. 1. TwitterSheep This is a really simple, but super fun way to look at your Twitter followers.

The Art of using #FollowFriday Effectively If you are an active twitter user, you will be aware of #followfriday, a hashtag that is used to recommend people you like, so that your followers also follow them. As this trend was followed on Fridays, that is why it was named as FollowFriday. The problem with the #Followfriday used nowadays is that people don’t care whom to give recommendation or not. They list a bunch of people and they add a #FF hashtag, so that people could follow them. As these #ff tags are usually devoid of any information and careful reasoning, the total value of a followfriday recommendation gets nullified. Recommend Selectively Tweet Nest Ever thought to yourself that you wish there was some way you could take a look back and see what you tweeted around this time last year? Or perhaps you remember that time you tweeted about that hilarious viral video, and now you can’t find it? By installing Tweet Nest on your own web server, now you can! Features include:

Topsy - Instant social insight With iOS 9, Search lets you look for content from the web, your contacts, apps, nearby places, and more. Powered by Siri, Search offers suggestions and updates results as you type. There are two ways to use Search on your iOS device. Quick Search Drag down from the middle of the Home screen and type what you're looking for. Social Essentials To prove the value of social media marketing, you have to go beyond the number of likes or followers for your brand. comScore Social Essentials represents one of the first social marketing measurement capabilities we’ve seen that enables brands to understand social media impressions and the corresponding attributes and behaviors of those reached. This new service represents a significant breakthrough in social media measurement that will definitely help marketers understand the value of their social media investment. Lise Brende Director of Marketing Analytics for Bing & MSN Microsoft

Twitter Background Design How-To and Best Practices This post was originally published in 2009 The tips and techniques explained may be outdated. With Twitter quickly becoming the hottest site to be seen on, everyone wants to stand out from the crowd. There has already been a range of quality designs showcased on various sites, which has shown an emergence of trends such as the ‘sidebar’. Let’s take a look at some of the best practices around Twitter background design and get to work creating our own. We all recognise the default blue Twitter background right? Twitter Business Center We have confirmed with Twitter that beta testing of its new business features, dubbed the "Twitter Business Center," has begun. According to the company, "only a handful of accounts have these features presently," but it will expand on a gradual basis to more accounts. One of the biggest additions is the ability for businesses to accept direct messages on the service, even from people they don't follow. We were able to grab exclusive information and screenshots of the Twitter Business Center thanks to our friend Dave Peck, a social media strategist at LSF Interactive/blogger at New Media Chatter. Here is an overview of some of the new features that businesses can expect to enjoy in the near future: