SOLAR IMPULSE - AROUND THE WORLD IN A SOLAR AIRPLANE 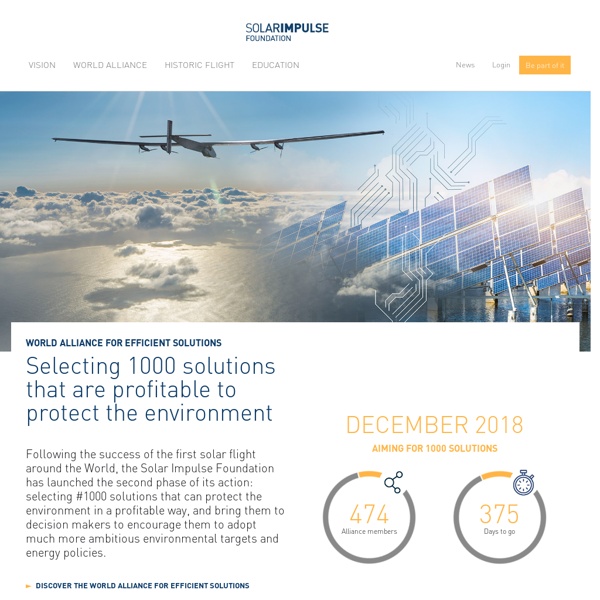 Wind farms could become 'monuments of a failed civilisation', top environmentalist claims "We never intended a fundamentalist Green movement that rejected all energy sources other than renewable, nor did we expect the Greens to cast aside our priceless ecological heritage because of their failure to understand that the needs of the Earth are not separable from human needs." The veteran environmentalist added: "We need to take care that the spinning windmills do not become like the statues on Easter Island - monuments of a failed civilisation." The proposed tower would be installed in woodland close to his home in Broadwoodwidger, Devon. It has attracted fierce opposition from locals and he has now thrown his scientific reputation behind their campaign.

Mesh networking Illustration of a mesh network. A mesh network can be designed using a flooding technique or a routing technique. When using a routing technique, the message is propagated along a path, by hopping from node to node until the destination is reached. Why You Should Build Your Own Internet by Brian Berletic There are a lot of reasons to build your own Internet. In some places, you may have access to the Internet, but not particularly like your service provider or those monitoring and regulating your network.

Domain-driven design Domain-driven design (DDD) is an approach to software development for complex needs by connecting the implementation to an evolving model.[1] The premise of domain-driven design is the following: Concepts[edit] Concepts of the model include: Context The setting in which a word or statement appears that determines its meaning; Solar panels have gotten thinner than a human hair. Soon they’ll be everywhere. One of the reasons I think solar photovoltaic power is going to take over the world is that it is scalable in a way no other power source can be. It can be used to build multi-hundred-megawatt power plants, or it can be scaled down. Way down. How far down? Try less than the width of a human hair. Solar cells are getting ridonkulously small

Nintendo shareholders want Mario on their iOS and Android devices What Nintendo shareholders dream at night Since even before the original Nintendo Entertainment System landed in living rooms, one of the Big N’s core business practices has been profiting from their hardware. It would stand to reason, then, that the concept of developing Mario or Zelda games for the iPhone would be ludicrous. Despite the logic, Nintendo investors are growing angry over the company’s continued shunning of mobile gaming platforms. According to Naoku Fujimura and Yoshinori Eki of Bloomberg Tokyo, Nintendo shareholders want Nintendo to abandon their hardware exclusivity with their core franchises, and either begin acquiring mobile game companies under their umbrella, or develop new content for devices like the iPhone. Masamitsu Ohki, a fund manager for the Tokyo-based Stats Investment Management Co., reminds us that Nintendo’s stock price is at a six-year low.

9 Uses For Hemp You Won’t Learn From Mainstream Media By Amanda Froelich These are the most newsworthy benefits of industrial hemp corporate media won’t teach you about. Although the negative stigma associated with cannabis has lessened in recent years – especially since THC- and CBD-rich oils were found to be a powerful aid in fighting cancer – it still hasn’t garnered full support from the public. This is unfortunate, as hemp is one of the most versatile (and longest cultivated) crops on the planet and can be used for a variety of practical and economical uses.

A Saltwater Powered Sports Car? It’s True — and Europe Just Made it Street Legal 2nd July 2016 By Carolanne Wright Contributing writer for Wake Up World Quantum Dot Solar Windows Technology Wins Special R&D 100 Award Recognition Los Alamos Center for Advanced Solar Photophysics researchers hold a large prototype solar window. From left to right: Jaehoon Lim, Kaifeng Wu, Victor Klimov, Hongbo Li. R&D 100, the national magazine of research and development, named the winners of its 2016 technology innovation awards at the award ceremony November 3rd, 2016 at the Gaylord National Resort & Convention Center in a Maryland suburb just outside Washington, D.C. Move Over, Wind and Solar — Human Foot Power is the Next Big Step in Sustainable Energy Technology January 5th, 2017 By Carolanne Wright Contributing writer for Wake Up World If engineers at the University of Wisconsin-Madison have anything to say about sustainable energy, we may soon be generating electricity by the simple task of walking.

Inhabitat - Green Design, Innovation, Architecture, Green Building The Estream portable generator is powered by, arguably, the most reliable natural resource on the planet: running water. A flowing river has the power to charge the device day or night, rain or shine, which can then juice up just about any USB-connected device. Estream, by Enomad, is perfect for camping or any off-the-grid adventure. Moving water becomes stored energy as the device’s turbine turns, even during a weak current or when dragged behind a kayak or canoe. The battery takes about 4.5 hours to charge completely, then it is fully portable and able to fuel three smartphones, GoPros, or even tablet PCs.

How To Build Wind Generator using Floppy Stepper Motor Floppy drive wind generator is a quite simple DIY project. Construction does look like a toy, but it can come handy in various occasions: camping, fishing, sailing or wherever power greed is not available. Small wind generator can power or recharge AA/AAA batteries (Ni-Cd, Ni-Mh), mobile phones, MP3 players.