25 Places That Look Not Normal, But Are Actually Real 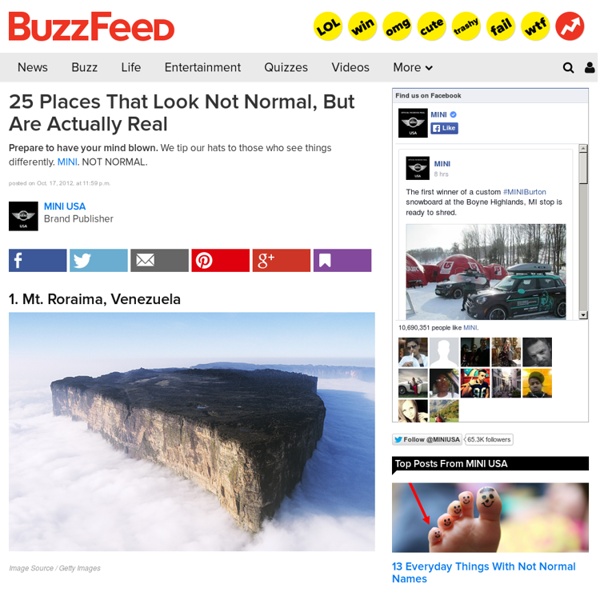 How I Can Afford My Life Of Constant Travel I’m confused. I’m simply confused as to how it’s possible that I have so far failed to properly explain how I’ve managed to travel/live/work abroad nonstop for 12 years straight (and counting). The questions are still pouring in every single day: How do you do it? How is it possible to travel for so long? Where does the money come from? And while I thoroughly enjoy communicating with readers (I’m being completely serious and encourage you all to continue sending your emails to me as often as you wish), the fact that these very questions are on the minds of so many of you out there has led me to believe that I need to do a better job at providing the answers. While it’s true that I’ve already written plenty of posts on the matter, clearly all of these posts, even as one collective entity, still fall well short of proving that a life of travel is not some crazy fantasy but a perfectly reasonable and easily attainable lifestyle option instead. So what am I to do? December 25, 1999: March 2000

Calke Abbey in Aspic Gardenista Older Calke Abbey in Aspic by Kendra Wilson Issue 104 · Best of 2013 · December 27, 2013 Newer Issue 104 · Best of 2013 · December 27, 2013 Share on email A desire for seclusion was a great preoccupation among the heirs to Calke Abbey in Derbyshire. Sir Henry Harpur began this trend of isolation in the late 18th century and was so shy that he sent orders to his servants by letter. Photographs by Kendra Wilson. Above: A view of the Abbey from a path leading past the family church towards the Physic and Kitchen Gardens. Above: The vinery in the kitchen garden, with its simple layout of York stone slabs, traversing a lower level of earth. Above: Irreplaceable panes, set vertically on one of the many outbuildings. Above: The potting shed with its abandoned glass cloches and terracotta pots. Above: Ancient tools, never replaced. Above: The orderly seed drawers, almost all with contradictory information pinned on later. Above: Chinese lanterns, or physalis alkekengi, growing in the Physic Garden.

Jeff Jones and Gay Haubner: Are You Ever Too Old To Learn A New Language? Ex-Pats in Costa Rica Discuss "Espeaking The Espanish" One appealing aspect of moving to a place where you don't speak the language is you no longer have to hear anything stupid. Living in New York City, where strangers rub elbows and ears together, means that you are constantly overhearing cell phone conversations, 90 percent of which constitute of "I dunno, where do you feel like eating?" and what passes for bon mots on the subway ("No azzhole, you step back"). There was also the ongoing dread of flipping TV channels, with a thumb never quite quick enough to avoid all mentions of "that hilarious photo of Katy Perry," how Vinny made Snookie cry, Beyonce's buckwild moves, or how an 11 year old girl in need of heart and liver transplants killed a 335 pound bear. (No, really! It's true! So the idea of retiring in Costa Rica, land of jungle, beaches, poison dart frogs and two-toed sloths, was further enhanced by knowing we'd be able to ignore the conversations around us. How were other ex-pats faring? Numbers should have been simple enough.

The 10 best treks in the world - travel tips and articles These 10 classic treks are for serious walkers. All of them require a sturdy pair of lungs, fit legs and a good amount of preparation. However, if you choose to go on any of these trails then you will be rewarded with experiences that last a lifetime. In no particular order: 1. Image by Jean-Baptiste Bellet This demanding 15- day (168km, 104mi) slog through Corsica is legendary for the diversity of landscapes it traverses. 2. Image by funkz This 33km (20mi) ancient trail was laid by the Incas and is currently traversed by thousands each year. 3. Image by Crazy Joe Devola ‘The land of the Dogon people’ is one of Africa’s most breathtaking regions. 4. Image by lampertron Reaching a height of 5,545m (18,193ft) at Kala Pattar, this three-week trek is extremely popular with those who want to be able to say, ‘I’ve been to the base of the world’s highest mountain’. 5. Image by Chandramohan Burly V Fewer folk trek on the Indian side of the world’s greatest mountain range. 6. Image by brewbooks 7. 8.

15 Strangest Houses From Around the Globe There are no limits to people's imagination, craziness and creativity as reflected in these bizarre constructions. See this original list of the world's strangest houses, some of which, we're pretty sure, you've never seen anywhere before. 1. Gingerbread House. Orlando. Florida. 2. Fairy chimney houses, carved out of rocks in the Roman period, can be found in Göreme, a town in Cappadocia and an important monastic center between 300-1200 AD. 3. The stone house in the Fafe mountains in northern Portugal was built in 1974. 4. The cube houses are located in Rotterdam and Helmond, the Netherlands. 5. 6. 7. The house was constructed in 1940 in Hazard. 8. A vortex installation known as Inversion was designed by Dan Havel and Dean Ruck at Art League Houston. 9. 10. 11. 12. Designed by an Austrian artist Erwin Wurm, the Fat House is, actually, a life-sized building. 13. Designed by Daniela Czapiewski, the upside down house is located in the Education Centre in the village of Szymbark, Poland.

My Icelandic adventure Artist residencies are designed to fulfill creative minds that find themselves lacking in time, motivation and inspiration; residencies can be fundamentally important for any creative professional. As the price of graduate schools rise, salaries remain steadfast and art sales for the average artist are nonexistent limited, residencies can be increasingly valuable experiences. Writers, musicians and artists have infinitely varied practices and inspirations. Some artists want nothing more than to live in NYC, work all day in the studio, and rub shoulders with collectors and critics in Chelsea at night. The residency I have spent the last month at in Iceland was not a residency for that type of person. I came to Iceland at the beginning of August for a monthlong stay at Gullkistan, a residency for creative people in Laugarvatn (pronounced something like Lurrahgahvaht-n) in southern Iceland. I flew into Iceland and spent two nights in the capital city, Reykjavik. My home away from home.

Fairytale Destinations Is it a dream or is it for real? These places will make you wonder whether you step into the land of magic and fantasy or still firmly stand on the ground. With unearthly nature, unreal landscapes or fairy tale architecture, these destinations will take you far away from your humdrum reality. Picturesque Colmar in France, considered the most beautiful city in Europe, looks like it came straight out of a fairy tale. This tiny town in Alsace is famous not only for its magically colourful old town. As if being the wine capital was not enough, Colmar, with its pretty squares, fountains and canals, is also called the "little Venice" (la Petite Venise). The Lord of the Rings' scenery of Faroe Islands truly makes you believe the archipelago is inhabited by hobbits and elves. Saksun, Faroe Islands. Castle Neuschwanstein in Bavaria, Germany in autumn. It is not a sugary Disneyland construction, although it looks like a fairy tale palace occupied by some capricious princess. Palacio de Sintra.