Moustiers-Sainte-Marie en Provence. SCAD Lacoste Drone Footage. Lacoste - Photos HD - Pictures - Photos of Provence. Living on Cozumel Island. Don’t Be A Stranger: Some Thoughts On The State Of Affairs In Chiapas. Driving through the mountains of Northern Chiapas, taking the old highway from Villahermosa through miles of banana groves, hibiscus fields and mountains that more closely resembled Peru, or maybe even China, than the landscapes I usually associate with Mexico, I got the feeling I was very far from home. 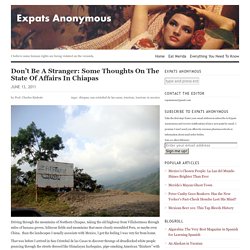 Loving Mexico and Beyond. Andy Davidhazy/Pac.Crest Trail. In 2013, I completed a 2660 mile long solo hike of the Pacific Crest Trail, going from the Mexican border to Canada through the mountains of California, Oregon and Washington. 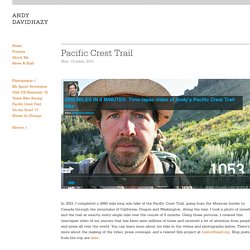 Along the way, I took a photo of myself and the trail at exactly every single mile over the course of 5 months. Using those pictures, I created this time-lapse video of my journey that has been seen millions of times and received a lot of attention from people and press all over the world. You can learn more about my hike in the videos and photographs below.

There's more about the making of the video, press coverage, and a related film project at LostorFound.org. Blog posts from the trip are here. Flickr/Yahoo produced short documentary with interview (broadcast on June 5, 2015) Watch the Northern Lights in Bed From These Glass Igloos - Thrillist. Paris : an exclusive high definition 360° panorama. A Tour of the World’s Largest Labyrinth: The Odessa Catacombs. Caves & Mines, Folklore, Ukraine, Underground, Urban Exploration Stretching to an estimated total length of 2,500km, the Odessa Catacombs are perhaps the largest network of tunnels anywhere in the world. 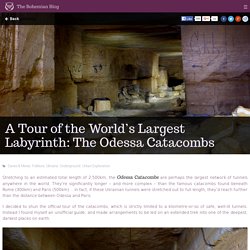 They’re significantly longer – and more complex – than the famous catacombs found beneath Rome (300km) and Paris (500km)… in fact, if these Ukrainian tunnels were stretched out to full length, they’d reach further than the distance between Odessa and Paris. The Paris to Versailles train has had something of a wonderful period makeover to better reflect the destination!

Plan it / Book it 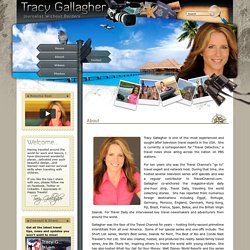 She is currently a correspondent for “Travel Detective,” a travel news show airing across the nation on PBS stations. For ten years she was the Travel Channel’s “go to” travel expert and network host. During that time, she hosted several television series and specials and was a regular contributor to TravelChannel.com.

A sailing circumnavigation you can follow on Google Earth. Vic Stefanu - World Travels and Adventures. Cycling Dutch Girl. Room Lust: Hotel Saint Cecilia - The Dandy Liar. Get ready for a lot of pictures, guys. Because try as I did, I just couldn’t narrow down the images. Why? Because every room in the Hotel Saint Cecilia is completely different from the next and is bursting with inspiration. Hotelier Liz Lambert knew she found a gem when this beautiful Victorian went up for sale. 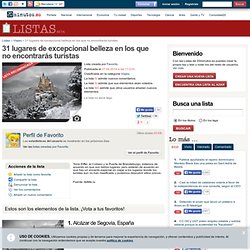 Rocamadour. Rocamadour[1] has attracted visitors for its setting in a gorge above a tributary of the River Dordogne, and especially for its historical monuments and its sanctuary of the Blessed Virgin Mary, which for centuries has attracted pilgrims from every country, among them kings, bishops, and nobles.[2] Sights[edit] Alleged fragment of Durandal in Rocamadour Pilgrimage[edit] 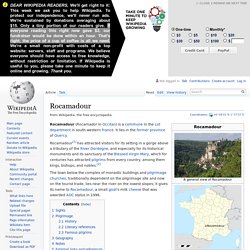 Paris, France by Night. Paris on a budget: the best cheap hotels and restaurants. Hotels for under £100 Prices are for a double room in low season, excluding breakfast. 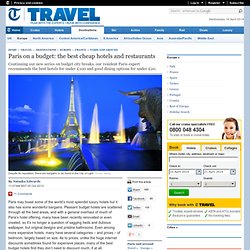 BLC Design Hôtel 8/10 4 rue Richard-Lenoir It’s BLC as in “blanc”, in this dazzling all-white design hotel near the Bastille. This 19th-century budget lodging was totally transformed in 2010 into a bright, modern den with a soothing, informal atmosphere. Rooms are compact but clever – with drawers under the bed and artfully arranged coat hooks that provide storage, though are perhaps not ideal for a long stay. Read a full review and check availability All hotels booked through the Telegraph Travel website come with a best price guarantee. 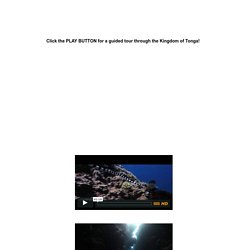 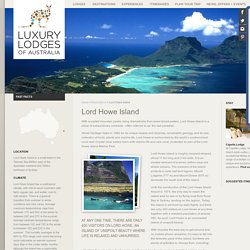 World Heritage listed in 1982 for its unique beauty and diversity, remarkable geology and its rare collection of birds, plants and marine life, Lord Howe is surrounded by the world’s southernmost coral reef. Crystal clear waters teem with marine life and rare coral, protected as part of the Lord Howe Island Marine Park. Lord Howe island is roughly crescent-shaped, about 11 km long and 2 km wide. It is an eroded remnant of a seven million-year-old shield volcano. Until the construction of the Lord Howe Island Airport in 1974, the only way to reach the island was by sea or by flying boat from Rose Bay in Sydney, landing on the lagoon.

. • Strolling through native Kentia palm and Banyan tree forests or along deserted golden sand beaches (there are 11 to choose from). Las 25 maravillas de México que tienes que conocer. The Explorers Club. Sintra portugal. Charming Town of Spello Italy. The small town of Spello is located in Perugia province in Umbria, a landlocked region of central Italy. 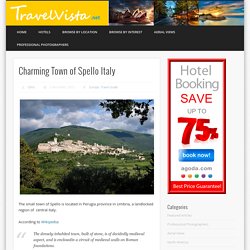 According to Wikipedia: The Ajanta Caves – Ancient Temples Carved from Rock. Two thousand two hundred years ago work began on an extensive series of cave monuments in Maharashtra, India. Over a period of hundreds of years, thirty one monuments were hewn piece by piece from the rock face. Then, some speculate around the year 1000AD, they fell in to disuse. Dense jungle grew around, hiding the caves away from human eyes. They Ajanta caves lay undisturbed for hundreds of years. Then, in April 1819, during the time of the British Raj, an officer with the unassuming name of John Smith came rediscovered a doorway to one of the temples. Trips By Date - Wilderness Inquiry. 11 Night Marovo Lagoon — Go Tours Travel. From $2603 pp Day 1 (Wed): Brisbane to Seghe Depart Brisbane on Solomon airlines to fly into the capital of the Solomon’s (Honiara) where you will be transfer to your domestic flight to Seghe airfield.

When arriving into Seghe you will be greeted by a representative from Ropiko Eco Lodge and transferred to the lodge by boat, this boat transfer will take you on a 2 hour scenic trip through the Marovo Lagoon. Day 2 (Thur): Ropiko Eco Lodge. A Real Lost World (Son Doong Cave) Son Doong cave is world's largest cave, located in Quang Binh province, Vietnam. It was found by a local man named Ho Khanh in 1991 and was recently discovered in 2009 by British cavers. The name "Son Doong" cave means "mountain river cave". It is a forgotten world, giant and mysterious, full of strange life and formations. It contains skyscraper sized stalagmites, underground rain forests, strange cave pearls and many more amazing sites in this massive cave system.