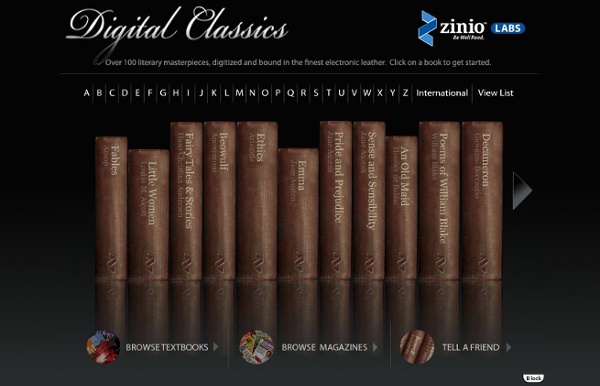 Brave New World by Aldous Huxley Chapter One A SQUAT grey building of only thirty-four stories. Over the main entrance the words, CENTRAL LONDON HATCHERY AND CONDITIONING CENTRE, and, in a shield, the World State's motto, COMMUNITY, IDENTITY, STABILITY. The enormous room on the ground floor faced towards the north.

85 Free High Quality Silhouette Sets Initially silhouette was applied on portraits or pictorial which were be used for thin black card. But nowadays, we can easily find silhouette images in many media forms like artworks, illustration, photography, movies, graphic design or even fashion and fitness. Modern designers use silhouette to create dramatic effect in many art works because silhouette emphasizes the outline and view of an object. The mystery of silhouette objects create a space for viewers’ imagination. Apple’s iPod advertisement is a successful example of using silhouette. UVa Library Digital Collections: Finding and Using Digital Resources Exhibitions The Library's new exhibitions interface features dozens of exhibitions from the mid 1990s to the present. Check back as new exhibitions are added and past exhibitions are updated and republished. Spotlight: James Madison: Unsung Hero of the UniversityOvershadowed by the tremendous contributions made by Thomas Jefferson to establish the University, Madison's role is often overlooked, although he worked closely with Jefferson to realize his vision for an institution of higher education to prepare students for their responsibilities as citizens of the new Republic. After Jefferson's death in 1826, Madison was elected the University's second Rector and guided the University through its fledgling period of development, a period marked by financial difficulties, the departure of several of its first faculty, and episodes of disruptive student unruliness.

The role of the Internet as a platform for collective action grows A survey released this week by the Pew Research Center’s Internet and Life Project shed light on the social side of the Internet. The results offered insight into the differences between the connected and the disconnected, revealing that Internet users are more likely to be active participants, with some 80 percent of Internet users participating in groups, compared with 56 percent of non-Internet users. These findings confirm the impact of the the Internet on collective action, observed Beth Noveck, NYU law professor and former deputy CTO for open government at the White House. “Internet users are more active participants in groups and are more likely to feel pride and a sense of accomplishment.” Perhaps we are all not, as Robert D.

Best Places to Get Free Books – The Ultimate Guide When we were reviewing 10 of the best online resources for free books, we had a LOT of readers chime in with their own favorites as well. Thank you for all your helpful contributions! In fact, we had so many suggestions, we have enough to compile a huge list from them, so here they are in no particular order: The Great Debate Authorship Links | Home There are enough conspiracy theories out there regarding the works of Shakespeare (or attributed to Shakespeare, if you prefer) that entire careers have been built upon positing alternate candidates for the true authorship of the works. Whether or not the claim of Shakespeare is legitimate, the burden of proof would seem to lie on those who wish to discredit the Bard. On the other hand, it's only fair to give attention to this debate as it has been ongoing for quite some time and shows no signs of waning anytime soon. Edward de Vere, 17th Earl of Oxford: This contemporary of Shakespeare has been strongly advanced since the 1930s as the true author of Shakespeare's plays.

Frans Johansson: The Secret Truth About Executing Great Ideas In this high-energy talk, Frans Johansson illustrates how relentless trial-and-error – coming up with an idea, executing it on a small scale, and then refining it – is THE distinguishing characteristic of the greatest artists, scientists, and entrepreneurs. Why? Because humans are not very good at predicting which ideas are going to be a success. Thus, nearly every major breakthrough innovation has been preceded by a string of failed or misguided executions. So, as Frans says quoting Churchill, “If you’re going through hell, keep going.”