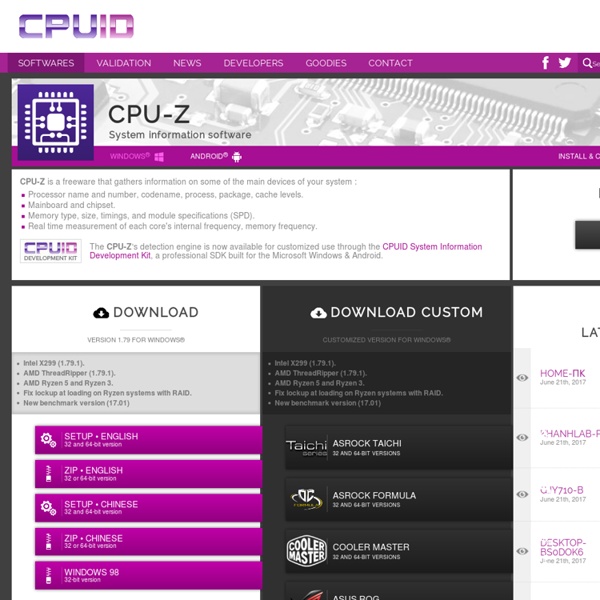 Install and Remove Since version 1.51, CPU-Z includes an installer. The installation offers several advantages in comparison to the stand-alone version : The installation creates program entries in the start menu and on the desktop. It installs the right binary (x32 or x64) depending on your system. Installation Run the setup executable file, and let it guide you for the installation process. Removal You can remove the program either from the Add or Remove Programs window (from Settings, Control Panel), or choose Uninstall CPU-Z from Start menu, Programs, CPUID, CPU-Z. Configuration file CPU-Z uses a configuration file, cpuz.ini, that allows to set several parameters for the program. Application parameters Special Keys The F5 key allows to save a screenshot as a bmp file in the application directory. Cache Latency Computation The cache latency computation tool allows to gather information about the cache hierarchy of the system. CPU-Z reports a wrong CPU vcore.

Computer Software Tools Computer Software Tools ¶ In addition to basic Hand Tools for Computer Repair, you may need some software tools to diagnose and troubleshoot problems and to recover from them. The conundrum, of course, is that most diagnostic software utilities run under Windows, but quite often when you're troubleshooting it's because Windows won't load or run because it's corrupted itself or been damaged by a virus or worm. Fortunately, there's an alternative. A "Live Linux CD" such as Knoppix ( shown in Figure 2-3, allows you to boot and run a full-featured Linux operating system directly from the CD, without altering the contents of your hard drive. Knoppix and similar Live CD distributions include a plethora of graphics-based tools that allow you to diagnose, test, and burn-in the various hardware components of your system.

NirCmd See Also NK2Edit - Edit, merge and fix the AutoComplete files (.NK2) of Microsoft Outlook. Description NirCmd is a small command-line utility that allows you to do some useful tasks without displaying any user interface. Prio - Priority Saver Windows is a multitasking system. It means that a lot of various applications are running simultaneously in it. You directly work with some of them, but some of them work invisibly and independently. The priority of an application is a parameter that tells the system which task has priority over other tasks.

GPUZ GPU-Z is a lightweight system utility designed to provide vital information about your video card and graphics processor. Download GPU-ZSupport Forum Main Features Master Tutorial to Make Windows XP Super Fast This tutorial is meant for increasing the performance of Windows XP, either its a fresh installation or an older one. After following this tutorial, you'll notice a major improvement in your system performance. So without wasting time, lets start the tutorial: 1. First download registry script given in following topic which contains a few tweaks which are completely safe and can help you in increasing the performance of Windows XP. Download Windows XP For Free and Legally, Straight From Microsoft As the years progress and Microsoft moves on from Windows 7 into Windows 8 and beyond, it’s certainly starting to feel like Windows XP is just an artifact of the past. But is it? Might there be situations where you need to use XP again – or maybe you just miss XP and want to take a stroll down memory lane? Well, what if I told you that right now, by using VirtualBox, you can download a free Virtual Machine featuring a full, free version of Windows XP? It’s absolutely true – you can download Windows XP.

Adobe Flash Player Plugin Your rights to use any Flash player, projector, standalone player, plug-in, runtime or ActiveX control provided to you below, shall be solely as set forth in the following link, Unless and except as provided therein, you shall have no rights to use or distribute such software. Adobe Flash Player 17 (Win and Mac) and 11.2 (Linux) - 32 bit and 64 bit debugger (aka debug player or content debuggers) and standalone (aka projectors) players for Flex and Flash developers. 5/12/2015 – Updated debugger and standalone versions of Flash player. These versions contain fixes for critical vulnerabilities identified in Security Bulletin APSB 15-09. The latest versions are 17.0.0.188 (Win and Mac); and 11.2.202.460 (Linux).

Windows XP rises from the grave: Simple hack gives you five more years of updates With a simple registry hack, you can net yourself five more years of official Microsoft updates for your aging Windows XP machine. Microsoft, though, says you really shouldn’t do it — and that you ought to be a good little boy and “upgrade to a more modern operating system” instead. Read on, to find out how to enable the Windows XP updates — and whether you should do it or not.

AutoItScript You can download the main AutoIt package and other related scripting tools from this page. AutoIt has been designed to work on Windows XP, Windows Server 2003, Windows Vista, Windows Server 2008/2008 R2, Windows 7, Windows 8. With no annoying runtime libraries required! AutoIt executables and setup programs have been digitally signed by “AutoIt Consulting Ltd”. Current Versions 15 CMD Commands Every Windows User Should Know Advertisement Updated by Tina Sieber on January 21, 2017. Microsoft has slowly but surely pushed the command line aside in the Windows interface.

How to slipstream an XP disc with SP3 and all other updates Microsoft has told us that all existing XP updates will still be available to download after support has officially ended. This means that you could perform a fresh installation of XP, using your original installation disc, then use Windows Update to install all of the updates and patches, up to the date that support ended. There's still a worry, though, that at some point in the future Microsoft will remove this ability, dropping all of the updates. Fortunately, there's a simple way to get round this, by using a few tools to create a brand-new installation disc that has all of the updates and patches pre-loaded. The process is called slipstreaming, which is officially supported by Microsoft. You'll need to have your original Windows XP installation disc to hand before you start.

Power Mixer & Volume Lock Free Trial Downloads Here you can download fully functional trial versions of our software. The trial allows you to evaluate the full functionality of our products with no limitations for 14 days. Matthew McMillan Being a skeptic I usually don't believe something until I see some hard evidence. When I am dealing with claims made by a company trying to sell me something I don't believe anything until I see results with my own two eyes. At work we recently began upgrading from a NetApp FAS270C to a FAS2240-2. We needed to upgrade to a faster filer anyway so deduplication wasn't the only selling point but it definitely was of interest to me.