Download Super Smash Bros Brawl Stages Custom Built by Gamers (Build 20120101031015) It brings me great sorrow to announce this to everyone who has been coming to this site: Super Smash Bros. 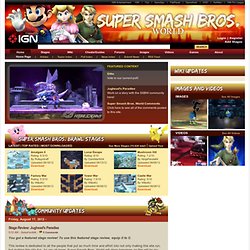 World will be closing, effective tomorrow. I know it may seem hard to believe, especially considering how much has been going on lately, but it's actually happening, as I was given an e-mail about this from the manager of the IGN community sites. This is part of IGN's decision to close all of its community sites in order to increase traffic to its main site. Super Smash Bros. World may have been decreasing in active members and number of stages uploaded per day for the last year, but it's very sad news, and I wish it wasn't happening, but it really is going to happen. 40 Wii Games in WBFS (Japanese){NTSC-J}[namster] REPACK (download torrent) - TPB (Build 20111231031039)