A Game Documentation and Review Project 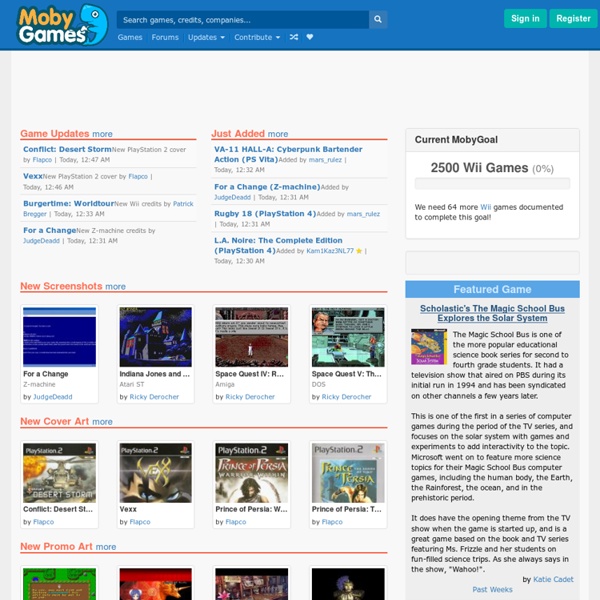 A big huge Moby-sized thanks to our first Patrons! Including: Chris Hayes, Father Jack, Simon Carless, Brave Wave Productions, MK2k, Trixter, netsabes, Rob Caporetto, Smike, Arjon van Dam, Reinhold Hoffmann, Sgt. Nukem, Johan Jönsson, Mike Melanson, Víctor "vEK" Cerezo, Glenn Sugden and Ole Bekkelund. As a special thanks to our early supporters, the first 100 will also be immortalized as a Founding Patron. Forever listed on MobyGames.com even if you are only a patron for a month. To become a Patron, or for more information, please see our Patreon page.

10 Weird NES Game Glitch Moments Remember playing Nintendo as a kid and all of a sudden the game looked kind of funny on the screen? Usually that meant there may have been dust in the cartridge or the game was simply crapping out. I can recall playing entire levels where the game scenery was all messed up and you basically had to play the game based on your memory of what the boards looked like. In other cases you’d be playing a game and a big “WTF?” would pop into your head because you saw something you probably shouldn’t have seen. Portal (video game) Portal was acclaimed as one of the most original games of 2007, despite being considered short in length. The game received praise for its unique gameplay and darkly humorous story. It received acclaim for the character of GLaDOS, voiced by Ellen McLain in the English-language version, and the end credits song "Still Alive" written by Jonathan Coulton for the game.

Pineapple Smash Crew Keep up to date with Pineapple Smash Crew news: Twitter Facebook IndieDB Check it out on Steam HERE Developed by lone-gun designer Rich Edwards with music brought to you by legendary chiptune artist Syphus, Pineapple Smash Crew is a fast paced tactical blast-em-up! PSC features tight squad formation shooting, aliens, robots, zombies and grenades- lots and lots of grenades! Ultima4 Building Worlds for the Web Thank you for visiting Phi Psi Software. If you are looking for the Flash version of Ultima IV, it is no longer available for download from this website. We received a Cease and Desist notice from Electronic Arts, which owns the copyright for the game, on March 11, 2011.

Thracia (video game) The game was also one of the first MMORTTBS(Mass Multiplayer Online Real-Time Turn Based Strategy) ever launched. As such, it managed to carry on the tradition of the classic turn-based gameplay made popular by famous titles like: Heroes Of Might and Magic or the Disciples series, while adding the online component. Thracia does not require players to install any client on their computers, therefore it offeres greater mobility than its predecessors. The game can be accessed from any terminal with an internet connection, the only prerequisite being the creation of a personal account by each user. After logging in, the player will get instant access to all the game modules instantly. The game is divided into three modules: the kingdom, the great map of Thracia and the battle mode.

Looking Glass Studios Podcast Part 9 of a continuing series, where I interview members of the now-defunct but highly influential Looking Glass Studios (1990-2000), which wrote the book on 3D first-person narrative game design throughout the 90s, in such games as Ultima Underworld, System Shock, and Thief. This week is Terri Brosius and Dan Thron. Dan was an artist/animator on Terra Nova, System Shock 2, and all three Thief games, doing much to solidify the look and feel of the Thief universe. Terri was a voice-actor in both System Shock (as SHODAN) and Thief (as Victoria) as well as a writer/designer for Thief, doing much to shape the overall story arc of the franchise. I talk with Terri and Dan about how they got into the industry, what influenced them in their contributions to the Thief franchise in particular, and what they consider good storytelling/world building in video games (and why it seems to be so scarce).

Daniel's base Genre: Action/AdventureContent: Mild fantasy violence Download Version 1.4 (22 July 2013) Download Mac Version 1.3 (14 May 2012) ported by Leon Arnott Watch trailer Flip Hero returns for the final battle against his nemesis, Cruiser Tetron - but can he really stop the reign of the machine warlord for all time?

Eternity II puzzle The Eternity II puzzle The Eternity II puzzle, aka E2 or E II, is a puzzle competition which was released on 28 July 2007.[1] The competition ended at noon on 31 December 2010. It was published by Christopher Monckton, and is marketed and copyrighted by TOMY UK Ltd. EVE University Class Library Welcome to the EVE University Class Library. All of the classes in the archive were originally put forth by instructors, and the actual recordings were made by volunteers. Without those volunteers the Class Library would not be possible. Volunteers are people like you! Next time you're in a class, consider recording it for the library, and give something back to the community! If you are interested in teaching a class, find out about Joining The Faculty, or for a list of the syllabi for these classes, visit the Syllabus Library.

Mac Vs PC - Best Commercials logo login Mac Vs PC - Best Commercials Smartly written and acted... Read more Unbelievable Invention Of The New CenturyThey've managed to invent the bicycle again!Read more BMX You Have Not Seen Before! Eternity puzzle An empty Eternity board Eternity is a tiling puzzle created by Christopher Monckton and launched by the Ertl Company in June 1999. Consisting of 209 pieces, it was marketed as being practically unsolveable, with a £1 million prize on offer for whoever could solve it within four years. The prize was paid out in October 2000 for a winning solution arrived at by two mathematicians from Cambridge.[1] A second puzzle, Eternity II, was launched in Summer 2007 with a prize of US$2 million.[2] Puzzle[edit]

NEO Scavenger How long can you survive the post-apocalyptic wastelands of NEO Scavenger? In the near-future, supernatural activity and human warfare have fragmented mankind into pockets of civilization struggling to survive in wild and dangerous lands. You awaken alone in an abandoned facility with no food nor water, and only a hospital gown and some mysterious items as clues to your identity. NEO Scavenger (playable as a stand-alone download or in the browser via Flash) is a game where you must survive in the wasteland long enough to figure out who you are. You can now play tons of free Amiga games in your browser Nostalgia fans, strap yourselves in – if you still fondly remember playing games on the Commodore Amiga, the good news is you can relive those days, and get a slice of retro gaming action directly in your web browser. Yes, forget about messing around with emulators, ROMs and the like, because the Internet Archive has fired up a new section: a software library for the Amiga, as spotted by Ghacks. This contains a whole host of games (and other software to boot) that you can play simply by clicking on the title, which will load it in your browser. Do note, however, that it might take a little while for the game in question to load (or a fairly long while in some cases). And further note that some games may not be functional, or may have sketchy controls.