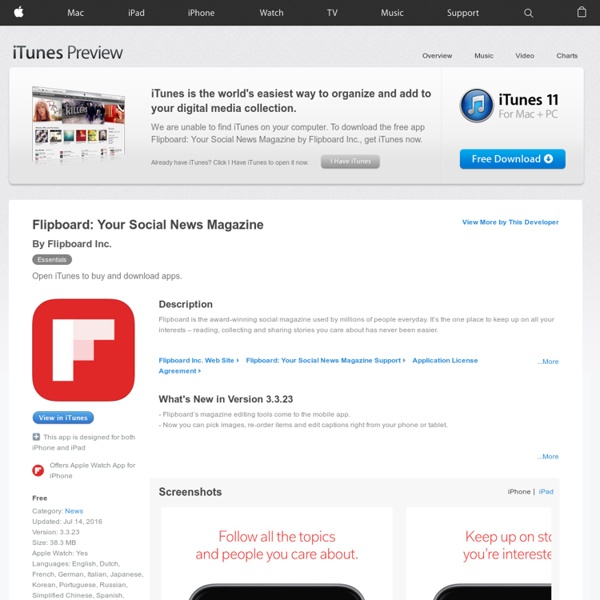 Description Flipboard is your personal magazine, at your desk, in your back pocket or on your wrist. Filled with stories, photos and videos on any interest, it’s a single place to keep up with your world. And now, if you want just a few highlights, the top ten stories can be sent right to your Apple Watch. Scan a summary, save it to a Flipboard magazine or share it with a friend. Collecting and sharing stories you care about has never been easier. Flipboard is your personal magazine. To start, pick a few topics, and Flipboard creates your personal magazine. Read world class publications like The New York Times, PEOPLE magazine, Fast Company, and Vanity Fair on Flipboard -- find any source with the search bar. Save stories by using the + button on anything in Flipboard and collect it into your own magazine - an excellent way to package articles around your passions. Download Flipboard and get started today—it’s free! To learn more about how to use Flipboard, visit our Support Page. ...More

Scoop.it Buffer is the best way to share on Twitter, Facebook, Google+, LinkedIn and App.net from one place. It work from news apps like Flipboard, Zite, Taptu, TweetDeck, Evernote, Pocket, Instapaper, Pulse, Feedly, UberSocial, Plume, Seesmic, Google Currents and other Google Reader app. You also get Twitter analytics, Facebook analytics & LinkedIn stats. When you find something to share, simply add it to your Buffer queue. Buffer will schedule tweets to Twitter, Facebook posts or LinkedIn updates spaced out over the day. You will get the best results by sharing on Facebook and Twitter for Android. 2012 Annual Report - Letter to Shareowners We drive cross-company initiatives to generate organic growth and improve margins. We review our progress against our long-term goals and through relative performance of 20 industrial peers and large banks. Our performance is near the top in almost every category, but we still have room for improvement. We have built broad technical capability that can deliver big systems and foster innovation.

The 50+ Best Ways to Curate and Share Your Favorite Social Media and News Content There’s so much information online just begging to be curated: news, social media, images, video, websites… the list goes on. Reading great content from my favorite blogs and websites is one of my favorite down-time activities. It’s also an important part of my job as an IT Director because I need to stay on top of the latest trends, announcements and tech news. Just a few years ago, the tools I used to use for reading and consuming content were Google Reader, StumbleUpon, Digg, Delicious… you know all the big names. More recently I’ve discovered some great new tools to read and share my favorite content which I’ve included here in this list.

Welcome to the Age of Curation Forrester Research analyst Sarah Rotman Epps coined a phrase Friday for something many have been talking about since Apple launched the iPad about six weeks ago. “Curated computing” refers to the way Apple staff examines each piece of software written for iPhone OS devices before allowing it into (or blocking it from) the App Store. Epps is almost certainly not among the first 10,000 people on the planet to observe that the iPhone OS does not allow users to install whatever programs they wish, unless the devices are jailbroken. Curation in the Age of Abundance “A curator is an information chemist. He or she mix atoms together in a way to build an info-molecule. Then adds value to that molecule.” – Scoble One of some buzzwords from SXSWEDU 2012 is “educators as curators”. With lots of Web2.0 curation tools available, what does it mean to be a curator?

Dropbox as a Hand-in Folder Dropbox is a terrific utility for storing files online. It’s accessible with any computer that can connect to the internet. (Don’t ignore the fact that your portable device is also a computer…) If you’re interested in cloud storage, this is the real deal.