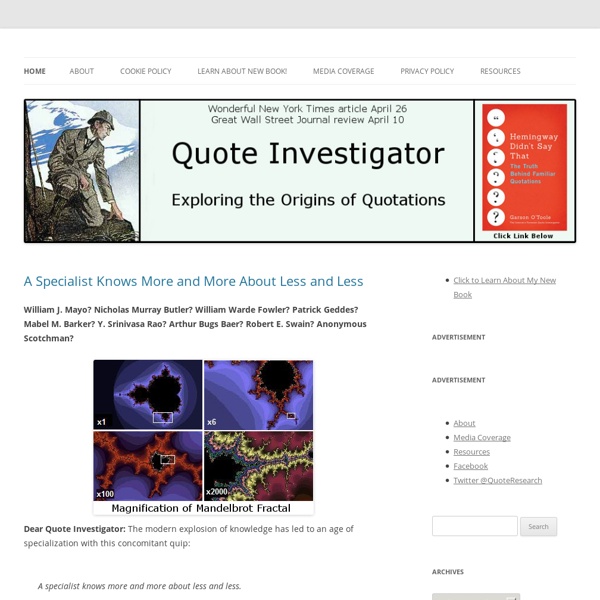 How to Bullet Journal: The Absolute Ultimate Guide — The Lazy Genius Collective We all have different brains that see the world in different ways. Some of you see words as colors, others see the months in a circle, and I see just about everything as linear as it can be. That means we all need different perspectives on our calendars. I like for my Monthly Log to be a list of dates rather a traditional calendar with squares; I tried both and totally prefer the list. But I still like to see the year at a glance, especially when holidays and birthdays fall.

Yes, Your Opinion Can Be Wrong Thursday, July 23, 2015 at 6 a.m. I have had so many conversations or email exchanges with students in the last few years wherein I anger them by indicating that simply saying, "This is my opinion" does not preclude a connected statement from being dead wrong. It still baffles me that some feel those four words somehow give them carte blanche to spout batshit oratory or prose. And it really scares me that some of those students think education that challenges their ideas is equivalent to an attack on their beliefs. -Mick Cullen I spend far more time arguing on the Internet than can possibly be healthy, and the word I’ve come to loath more than any other is “opinion”.

Strictly Spam Category Winner STRICTLY SPAM 2000 WINNER: David A. Winston, New York, N.Y. Brazen Teen Bitches, Take a serious look at your life. And allow me to introduce a powerful new substance from the Electri-Cellular Industry. Electrigel Creme Chronodex Today is a proud release of my Chronodex scheduler with GTD to-do list function! I had about 10 minutes of quiet time in the morning but then crazy whatsapp messages came in with lots of unfinished tasks, which reminded me of the importance of sitting down undisturbed to plan a good day. It was first developed in November 2013 for my personal use and I've been filling it up with tasks in many of the busier days. Everything Doesn't Happen For A Reason — Tim Lawrence I emerge from this conversation dumbfounded. I've seen this a million times before, but it still gets me every time. I’m listening to a man tell a story. A woman he knows was in a devastating car accident; her life shattered in an instant. She now lives in a state of near-permanent pain; a paraplegic; many of her hopes stolen. He tells of how she had been a mess before the accident, but that the tragedy had engendered positive changes in her life.

Concrete poetry George Herbert's "Easter Wings", printed in 1633 on two facing pages (one stanza per page), sideways, so that the lines would call to mind birds flying up with outstretched wings. Concrete or shape poetry is poetry in which the typographical arrangement of words is as important in conveying the intended effect as the conventional elements of the poem, such as meaning of words, rhythm, rhyme and so on. It is sometimes referred to as visual poetry, a term that has evolved to have distinct meaning of its own, but which shares the distinction of being poetry in which the visual elements are as important as the text.

Reading, Commonplace Books Austen, Thomas, Rev., compiler. Occasional Meditations: Compiled from Various Authors as They Accidentally Came to Hand / by Me T. Austen of Rochester, April 15th, 1770: Manuscript, 1770–1782. MS Eng 613. Houghton Library, Harvard University, Cambridge, Mass. FAQ - PressThink (Originally published April 29, 2004) If you’re the kind of person who loves to complain about “meta” posts and make fun of blogging about blogging, please. Don’t read this post. Avoiding Plagiarism: Quoting and Paraphrasing Introducing a quotation One of your jobs as a writer is to guide your reader through your text. Don't simply drop quotations into your paper and leave it to the reader to make connections. Integrating a quotation into your text usually involves two elements: A signal that a quotation is coming--generally the author's name and/or a reference to the work An assertion that indicates the relationship of the quotation to your text Often both the signal and the assertion appear in a single introductory statement, as in the example below.

Edwin H. Land Don't do anything that someone else can do. Don't undertake a project unless it is manifestly important and nearly impossible. Edwin Herbert Land (May 7, 1909 – March 1, 1991) was an American scientist and inventor. Among other things, he invented inexpensive filters for polarizing light, a practical system of in-camera instant photography, and his retinex theory of color vision. Clear Communication Introduction to Plain Language at NIH Plain language is grammatically correct language that includes complete sentence structure and accurate word usage. Plain language is not unprofessional writing or a method of "dumbing down" or "talking down" to the reader. Writing that is clear and to the point helps improve communication and takes less time to read and understand. Clear writing tells the reader exactly what the reader needs to know without using unnecessary words or expressions. Communicating clearly is its own reward and saves time and money.