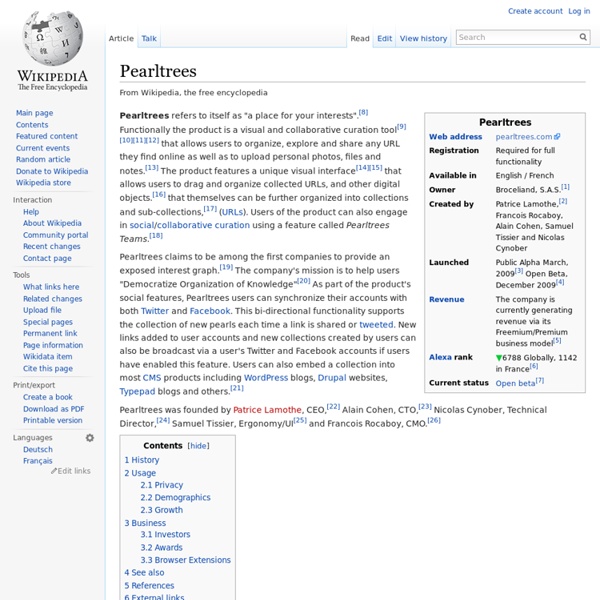 Pearltrees refers to itself as "a place for your interests".[8] Functionally the product is a visual and collaborative curation tool[9][10][11][12] that allows users to organize, explore and share any URL they find online as well as to upload personal photos, files and notes.[13] The product features a unique visual interface[14][15] that allows users to drag and organize collected URLs, and other digital objects.[16] that themselves can be further organized into collections and sub-collections,[17] (URLs). Users of the product can also engage in social/collaborative curation using a feature called Pearltrees Teams.[18] Pearltrees was founded by Patrice Lamothe, CEO,[22] Alain Cohen, CTO,[23] Nicolas Cynober, Technical Director,[24] Samuel Tissier, Ergonomy/UI[25] and Francois Rocaboy, CMO.[26] History[edit] Development of Pearltrees began in 2007. In July 2012 Pearltrees launched their iPhone app. Pearltrees introduced Pearltrees 2.0 on May 22nd, 2014. Usage[edit] Privacy[edit]

Pearltrees Radically Redesigns Its Online Curation Service To Reach A Wider Audience Pearltrees, the Paris-based online curation service that launched in late 2009, was always known for its rather quirky Flash-based interface that allowed you to organize web bookmarks, photos, text snippets and documents into a mindmap-like structure. For users who got that metaphor, it was a very powerful service, but its interface also presented a barrier to entry for new users. Today, the company is launching a radical redesign that does away with most of the old baggage of Pearltrees 1.0. Gone are the Flash dependency, the tree diagrams, the little round pearls that represented your content and most everything else from the old interface. Here is what Pearltrees 1.0 looked like:

PearlTrees - A Way To Curate Your Web Posted by Tom Foremski - March 5, 2010 I first met Patrice Lamothe, co-founder of PearlTrees in November and became fascinated with the PearlTrees service because of the many ways it can be used, and because it is an example of a media technology that is closely integrated into the way people are using the web. Since then, I've played around with PearlTrees and I can see lots of interesting uses for this technology, and its potential in creating a giant, curated web, one which goes beyond simple search, and beyond social tagging as in Delicious. And I'm excited now to be working with PearlTrees, as an advisor, in helping this startup grow to the next level. I'm very fortunate to that I can work with companies that interest me anyway, rather than having to work with companies that don't. [Full Disclosure: This is part of my media/business strategy consulting services that help finance my journalism on SVW.

Pearltrees App: A Virtual Bookmarking Tool "Cultivate Your Interests" How many websites do you find, that actually let you do that in a glitch free manner? A handful probably. Pearltrees is one exception in this case. Founded in 2007 and launched in 2009 by Patrice Lamothe and others at Paris, the site instantly broke the record by having 10,000 registered users instantly. By 2012, the user community grew to as many as 1 million unique visitors per month. But what does Pearltrees exactly do? Wikipedia : Pearl The most valuable pearls occur spontaneously in the wild, but they are extremely rare. These wild pearls are referred to as natural pearls. Cultured or farmed pearls from pearl oysters and freshwater mussels make up the majority of those that are currently sold. Imitation pearls are also widely sold in inexpensive jewelry, but the quality of their iridescence is usually very poor, and often, artificial pearls are easily distinguished from genuine pearls. Pearls have been harvested and cultivated primarily for use in jewelry, but in the past they were also stitched onto lavish clothing.

SlideShare The website gets an estimated 58 million unique visitors a month,[7] and has about 16 million registered users.[citation needed] SlideShare was voted among the World's Top 10 tools for education & e-learning in 2010.[8][9] SlideShare's biggest competitors include Scribd.com, Issuu and Docstoc. Some of the notable users of SlideShare include The White House, NASA, World Economic Forum, State of Utah, O'Reilly Media, Hewlett Packard and IBM. §Zipcasts[edit] In February 2011 SlideShare added a feature called Zipcasts.[10] A Zipcast is a social web conferencing system that allows presenters to broadcast an audio/video feed while driving the presentation through the Internet. Zipcasts also allows users to communicate during the presentation via an inbuilt chat function.

With 5 Million More Euros in the Bank, Pearltrees Gets Ready to Scale and Start Monetizing The Paris-based social curation platform Pearltrees just announced that it has raised a Series B round of 5 million Euros (about $6.62 million USD). The money is coming from Group Accueil, which had also invested in the service’s previous round. In total, Pearltrees has now raised 8.5 million Euros. The company, which launched its first alpha almost 3 years ago, aims to use this money to scale its product and – maybe even more importantly – implement a freemium business model for its service. The company did not publicly discuss what exactly this freemium model will look like. Pearltrees is probably best known for its highly visual interface to its collaborative curation service.

Feedly §History[edit] In November, 2006, Edwin Khodabakchian co-founded DevHD.[3] The company seeks to create a platform that uses RSS feeds, online storage, and social media integration to connect users with the information they find interesting.[3] DevHD’s first project, Streets, which aggregates updates from a variety of online sources is the basis of Feedly. Feedly, which was optimized for RSS feeds, was first released on June 15, 2008.[3] Originally called Feeddo, Feedly was first released as a web extension before moving onto mobile platforms.[4] On March 15, 2013, Feedly announced 500,000 new users in 48 hours due to the closure announcement of Google Reader.[5] By April 2, 2013, the total number of new users was up to 3 million.[6] At the end of May 2013, the total user number was up to 12 million.[7] §Web browser applications[edit]

Added ref to loss of features in PT 2.0. Needs sources. by dkurnik Jul 15