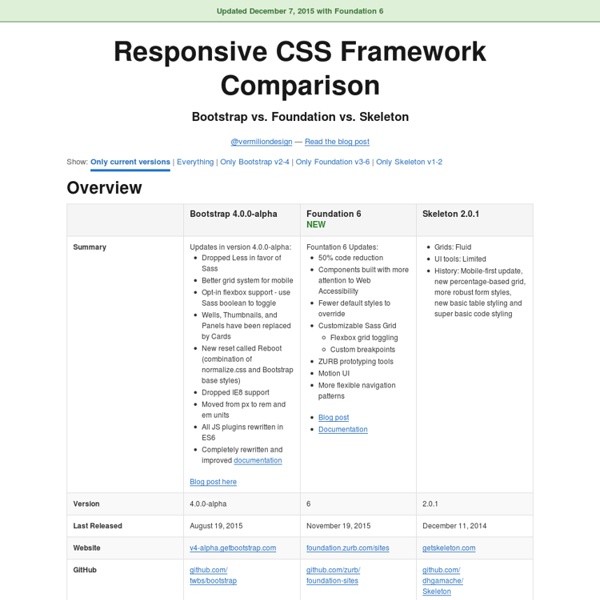 Bootstrap 4.0.0-alpha is a fairly large update to the framework. It has dropped Less support in favor of Sass, converted from px-based to rem-based sizing, improved its grid system, and dropped IE8 support. Also, all its JS plugins were re-written in ES6, it now uses a customized reset CSS file called Reboot, and offers flexbox support via a Sass boolean variable. In addition to this update, Bootstrap now offers themes at themes.getbootstrap.com. Also, Bootstrap will continue supporting version 3, unlike the dropping of version 2 support after the release of version 3. You can read more here. Foundation 6 is a fairly major update which includes more grid flexibility, custom breakpoints, optional flexbox, and more. Like Bootstrap 4, Flexbox is now toggleable via Sass in Foundation 6. The Sass/CSS has been reworked and consolidated, and there are fewer default styles to override on common elements. Skeleton 2 was updated in December 2014 after remaining mostly unchanged for about three years.

Responsive Navigation: Optimizing for Touch Across Devices As more diverse devices embrace touch as a primary input method, it may be time to revisit navigation standards on the Web. How can a navigation menu be designed to work across a wide range of touch screen sizes? In these demos, Jason Weaver and I decided to find out. The Demos Bootstrap 4 alpha 19 Aug 2015 Today is a special day for Bootstrap. Not only is it our fourth birthday, but after a year of development, we’re finally shipping the first alpha release of Bootstrap 4. Hell yeah! Bootstrap 4 has been a massive undertaking that touches nearly every line of code. How to build a responsive HTML5 website - a step by step tutorial Rating: 8.6/10 (1247 votes cast) Required knowledge level: intermediate In this responsive web design tutorial we will create an awesome responsive HTML5 website starting from scratch.

The orientation media query Page last changed today Right now Jason Grigsby’s excellent summary of the orientation media query is making the round of blogs and tweets, and that’s well deserved. Media queries will become extremely important in the near future, when we have to build websites that work on any device resolution from 300px to 1280px or more. Still, there’s one tiny nitpick I’d like to make, so that you fully understand when to use orientation and when to use device-width. Less.js Compile .less files to .css using the command line Heads up! If the command line isn't your thing, learn more about GUIs for Less. Installing lessc for Use Globally Install with npm npm install less -g The Top 25 Responsive Design Tools Note: this piece was originally published on Net Magazine, who recently nuked about 10,000 articles when they moved over to Creative Bloq. In an effort to preserve the writing I did for them, I’m republishing those articles here on my blog. This article is still alive over at Creative Bloq, so you can also read it there. As responsive web design evolves, Brad Frost looks at some of the best tools, resources and thinking for crafting exceptional responsive experiences This article first appeared in issue 241 of .net magazine – the world’s best-selling magazine for web designers and developers. Over the past few years we’ve seen an explosion of web-enabled devices with varying resolutions, capabilities, form factors, pixel densities, interaction methods and more.

Media Queries for Standard Devices If you think responsive's simple, I feel bad for you son. We got 99 viewports, but the iPhone's just one. —Josh Brewer, March 10, 2010 A major component of responsive design is creating the right experience for the right device. With a gazillion different devices on the market, this can be a tall task. We've rounded up media queries that can be used to target designs for many standard and popular devices that is certainly worth a read. Flatly Raw denim you probably haven't heard of them jean shorts Austin. Nesciunt tofu stumptown aliqua, retro synth master cleanse. Mustache cliche tempor, williamsburg carles vegan helvetica. Reprehenderit butcher retro keffiyeh dreamcatcher synth.

A non-responsive approach to building cross-device webapps Media queries are great, but... Media queries are awesome, a godsend for website developers that want to make small tweaks to their stylesheets to give a better experience for users on devices of various sizes. Media queries essentially let you customize the CSS of your site depending on screen size. Before you dive into this article, learn more about responsive design and check out some fine examples of media queries usage here: mediaqueri.es. As Brad Frost points out in an earlier article, changing the look is only one of many things to consider when building for the mobile web.