A brownie by any other name… 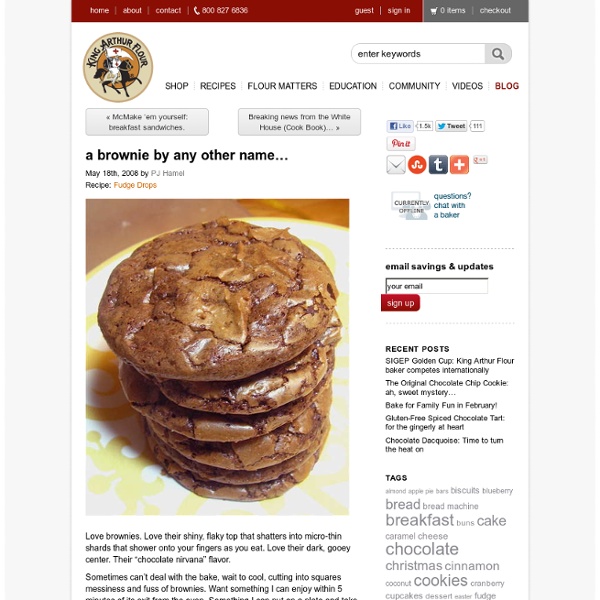 Love brownies. Love their shiny, flaky top that shatters into micro-thin shards that shower onto your fingers as you eat. Love their dark, gooey center. Their “chocolate nirvana” flavor. Sometimes can’t deal with the bake, wait to cool, cutting into squares messiness and fuss of brownies. Want something I can enjoy within 5 minutes of its exit from the oven. Every time I make these cookies (which, truth be told, is quite often), I think of a former colleague, Ana, who left King Arthur last year in order to be a full-time mom to her 2-year-old twins. The test kitchen bakers loved Ana. Ana still visits occasionally, 2-year-olds in tow. And when she does, she’ll invariably nose out any chocolate, and treat us to her classic reaction: “Perfect! These cookies are basically brownies: flat, round, 2 ½” brownies. First task: Combine the chocolate and butter. Melt in the microwave till softened… …then stir till smooth. Stir the chocolate into eggs and sugar, which you’ve beaten together. Buy vs.

Scottish Farmhouse Eggs Decided to mix things up and do a recipe. This is one I’ve made forever and I’m not 100% positive where I picked it up. It is always a crowd pleaser for brunch or breakfast. Chocolate Brownie Cookies & Namely Marly If you’re looking for a sweet treat these Chocolate Brownie Cookies might just be the ticket. Some days you wake up realizing you’re stuck in a rut. You don’t really know what got you there, except for the perpetual motion in the same direction. (That’s sort of the definition of a rut.) But then some days something will come along to shake your tires plum out of their tracks. Hopefully that something isn’t a panicked phone call from a loved one or an unexpected (and expensive) bill in the mail.

Chocolate Chip Lava Cookies I am so in love with these darn chocolate lava cookies! What is it about a warm, gooey chocolate chip cookie stuffed with decadent, rich, melted chocolate that makes it so irresistible?? Especially when topped with vanilla ice cream. These are one of Kev’s favorite homemade treats, and he usually asks me to make them at least once a week. They are so simple to whip up, and such a treat! Let’s make some right now :) Green Tea Chocolate Balls It's a simple recipe to make green tea flavored chocolate balls, using white chocolate. The sweetness of white chocolate is well-balanced by the bitterness of green tea powder. Yield: Makes 12 balls Ingredients:

Peanut Butter Cup Chocolate Cake Cheesecake Last week I got an email from a kind reader asking if I would consider developing a recipe for one of her favorite "factory-made" desserts. The minute I clicked the link she provided, I knew I wanted to make her cheesecake dreams come true. I had concerns about how this cake would translate to real world baking. No doubt it is mass-produced with industrial equipment since it is sold nationwide at a popular restaurant chain. Peanut Butter Cocoa Krispies Smores Bars I haven’t had real, good old-fashioned smores that are made over a campfire in far too long. Like about twenty years, give or take, but who’s counting. The last time I roasted marshmallows over a campfire was when I was a Girl Scout. I have memories of being too impatient to wait for the marshmallows to toast evenly and instead, I would intentionally dip my wooden stick, with splinter-filled marshmallows speared on it, directly into the flames. The marshmallows would ignite, char, and then I’d blow out the flaming charcoal black blobs of hot molten sugar, previously known as marshmallows.

How To Cook Like Your Grandmother I’ve tried lots of brownie recipes: Boxes, scratch, frosted, plain, nuts, chips, fudge … Each of them has something to like, but depending on my mood I might want a change of pace. Not any more. My wife found this recipe, and it’s perfect. I’m done looking. This is the brownie recipe that I’ll use from now on. DIY tutorial: sand art terrariums » kellybutton after researching and finding out there were different kind of terrariums i could make i read about the sand terrariums. they look best with a cactus inside to create a sort of desert-y feel! i loved the look of it and made me think of making sand art as a little kid. i was inspired! i had SO much fun with this project. it’s super easy to do.. you just need some supplies that most likely aren’t laying around the house. i found everything i needed at michael’s (minus the plants!) i bought my adorable plants as redenta’s garden in lakewood. they’ve got a beautiful selection and the prices aren’t bad!

Teabags! Perfect cookie for a Tea Party! For my boss's birthday I made these shortbread tea bags... I was inspired when I saw some wooden tea bags as part of a kid's play food set - I thought hmmm one day I could do shortbread dipped in chocolate! I made little tags with cupcakes and used embroidery thread. Salted Chocolate We’re watching our friend’s cat right now, and it’s a lot of fun. Kramer and I want to get a pet so badly, but I just don’t think that I have the time, energy, or, frankly, money, to take care of an animal the way I would like to. For now, though, it’s just fun to pretend to have a pet for a week. His name is Eddie and he’s pretty funny. I’ve never had a cat before, but Kramer grew up with them so he’s more accustomed to their behavior than I am. My dog at home, Tessa, is always so interested in what you’re up to and even sleeps under the covers at the foot of the bed, which I love and miss so much!