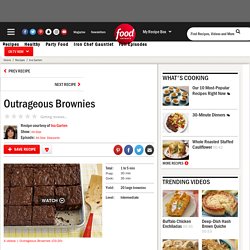 Preheat oven to 350 degrees F. Butter and flour a 12 x 18 x 1-inch baking sheet. Melt together the butter, 1 pound of chocolate chips, and the unsweetened chocolate in a medium bowl over simmering water. Allow to cool slightly. In a large bowl, stir (do not beat) together the eggs, coffee granules, vanilla, and sugar. In a medium bowl, sift together 1 cup of flour, the baking powder, and salt. Bake for 20 minutes, then rap the baking sheet against the oven shelf to force the air to escape from between the pan and the brownie dough. These Brownies Have Literally Taken Over The Dessert Game. Malteser brownies. Priyant’s double-chocolate pecan brownies. Preheat the oven to 180°C (160°C fan-forced). 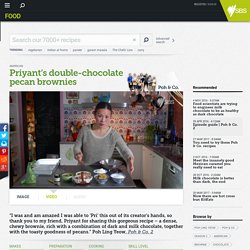 Grease and line a 28 x 18 cm glass or ceramic baking dish or rectangular slice tin with baking paper. Melt the butter in a heavy-based saucepan over medium heat. Add the dark chocolate and whisk until melted and smooth. Place the eggs in a large bowl and whisk until lightly beaten. Add the sugars and whisk until combined and smooth, then whisk in the salt and vanilla. Bake for 40 minutes or until a knife in the centre of the brownie comes out clean. Brown Butter Brownies - Self Proclaimed Foodie. Intensely rich and delicious, yet incredibly simple to make, Brown Butter Brownies. 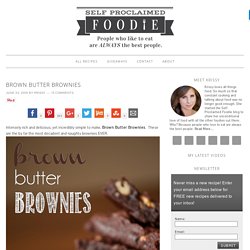 These are the by far the most decadent and naughty brownies EVER. The smallest of bite of this brownie will satisfy the most dedicated brownie lover. Best of all, these brownies are super simple to make. As if you needed any more motivation past the words rich, delicious and decadent. Chocolate orange brownies. Brownies & Bars Archives - Sallys Baking Addiction. Classic Mint Chocolate Brownies. - Sallys Baking Addiction. Thick and fudgy brownies layered with sweet mint frosting and easy chocolate ganache. 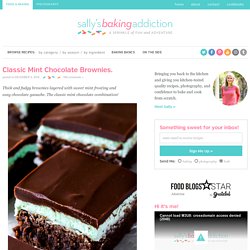 The classic mint chocolate combination! Recipe #3 of the Christmas Cookie Palooza combines the mighty forces of mint and chocolate. I’m aware that brownies aren’t technically cookies but sometimes dessert just doesn’t have to make any sense. 100 Christmas Desserts. Marshmallow Nutella Brownies in a Frying Pan. Peppermint Pattie Brownies. - How Sweet It Is. There’s something important that you should know about these brownies. 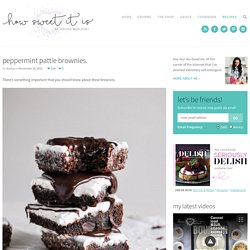 And it’s that I got to keep them all to myself. See, I married this guy who doesn’t like chocolate and mint together. What? I know. That’s what I said too. The thing is, I don’t even think I KNEW about the mint + chocolate combo hatred until after we were married. Me? Grasshopper squares (mint chocolate brownies recipe) - olive. Best ever brownie recipes - olive. Bourbon biscuit brownies What’s better than a chocolate Bourbon biscuit? 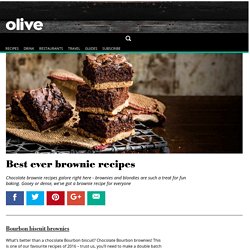 Chocolate Bourbon brownies! This is one of our favourite recipes of 2016 – trust us, you’ll need to make a double batch Cherry blondie tart. Quick and easy chocolate brownie recipe. These soft, gooey, chocolate brownies are a Seasoned favourite. 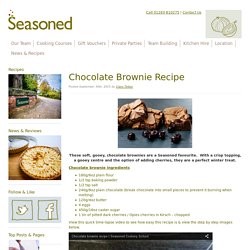 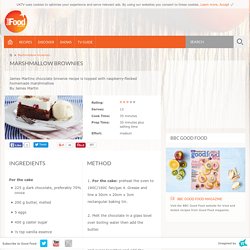 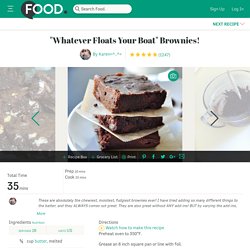 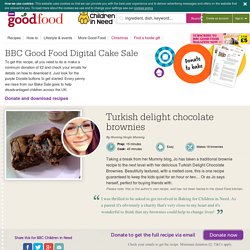 Brownie Cookies. Every month or so, the irresistible urge to make a pan of brownies creeps into my mind. Often only a day or two passes before the craving turns into a reality. Despite my regular hunger for brownies, I have yet to create a brownie that suits my tastes. Black & white brownies. Cheesecake brownies - RTE Food.

Melt the butter, 4 ounces of chocolate chips, and the unsweetened chocolate together in a medium bowl set over simmering water. Set aside for 15 minutes. In a medium bowl, sift together ¼ cup of the flour, the baking powder and salt and add to the chocolate mixture. Serve warm with a scoop of ice cream on top. Skillet Brownies Recipe : Ina Garten. Quadruple Chocolate Brownies Recipe - Michael Recchiuti. Frying Pan Brownies - cooking videos online. Amaretto chocolate brownies with walnuts Recipe by Tyler Florence. Ingredients View the great selection of wines we've chosen to complement this recipe. Hide this message 220g unsalted butter, plus more for pan250g dark chocolate chips180g plain flour1 tsp baking powderPinch salt4 large eggs400g sugar2 tbsps amaretto liqueur180g walnuts Adding a mixture of icing sugar and water, butter or cream to a cake or cupcake for a decorative finish. I know this Teach me, please Icing sugar, for garnish Use imperial measurements Method.

Extra Virgin Olive Oil Brownies With Fresh Cherries & Dark Chocolate Chunks - sweetest kitchen. 49 Paleo Desserts That Taste Anything But. A Collection of 21 Snickers Treats - Capturing Joy with Kristen Duke. Today is my hubby’s birthday, and when I was trying to think of a yummy treat to make for him, the idea of something SNICKERS sounded fun, because it is his all time favorite treat! I found so many mouth watering recipes, I had to share them. I think round-ups or collections are so fun, so I put another one together like the 37 White Chocolate Recipes I made last week, but with 21 Satisfying SNICKERS recipes! In no particular order, here are a few recipes I thought looked delicious: Snickers Pie by blogs babble Snickers Milk Chocolate Caramel Peanut Candy French Macarons Cookies by 6 bittersweets Snickers Icebox Cake by Bakers Royale. Snickers Brownies. Share on Pinterest.

Food - Recipes : American-style chocolate brownies. Best-ever brownies. Cut 185g unsalted butter into small cubes and tip into a medium bowl. Break 185g dark chocolate into small pieces and drop into the bowl.Fill a small saucepan about a quarter full with hot water, then sit the bowl on top so it rests on the rim of the pan, not touching the water. Put over a low heat until the butter and chocolate have melted, stirring occasionally to mix them. Remove the bowl from the pan. Alternatively, cover the bowl loosely with cling film and put in the microwave for 2 minutes on High. Leave the melted mixture to cool to room temperature.While you wait for the chocolate to cool, position a shelf in the middle of your oven and turn the oven on to fan 160C/conventional 180C/gas 4.Using a shallow 20cm square tin, cut out a square of non-stick baking parchment to line the base. Chocolate orange brownies. Chocolate & orange fudge squares.

The Big Game deserves a big dessert recipe, like these no-utensils-required handheld brownie sundae bars, coated in homemade magic shell! Apparently there is some “Big Football Game” coming up. Anyone know anything about it? I swear that if it weren’t for all the amazing game time recipes showing up throughout the blogosphere, it would pass me right by. That would be a major bummer though, because although I don’t necessarily partake in football fandom, I do enjoy me a party full of good game time food.

Whatever you call them though, trust me, you want to make these! Yes everyone, I’m one of those people that has my Christmas tree up by Thanksgiving. Some people seem annoyed by that, but really who cares? Plus, I don’t buy a lot of Thanksgiving decorations and I’m too lazy to put decorations up for just a few weeks only to get them down and swap them out with different ones. But let’s not get crazy and leave our tree up until the end of January or even the beginning of February – that’s pushing it (and I still see that every year). Having said that, I chose to put Christmas sprinkles on half of these brownies even though it’s the middle of November. Ingredients. Salted Caramel Brownies. Chunky Cheesecake Brownies Recipe. Chunky Cheesecake Brownies Recipe.