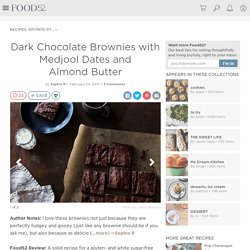 Find your friends who are already on Food52, and invite others who aren't to join. Let's GoLearn more Join Our Community Follow amazing home cooks. Collect recipes and articles. Sign Up ♦ 23  Save ▴ If you like it, save it! Save and organize all of the stuff you love in one place. Got it! If you like something… Click the heart, it's called favoriting. (Paleo) Brownie Bites. I made these Brownie Bites last night. 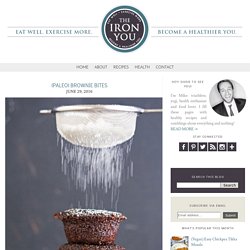 Why? Because I wanted chocolate. Where? In my kitchen. And you know what? You know those brownie bites you get in bulk at the warehouse store? These (Paleo) Brownie Bites are decadently rich and perfectly satisfying. These moisty, fudgy bites of brownie are sure to be a hit with everyone. Avocado Brownies & Coconut Oil Fudge. One-Bowl Fudgy Pumpkin Paleo Brownies. Oct 20 Imagine fudgy paleo brownies made with pumpkin, maple syrup, coconut flour and almond flour! 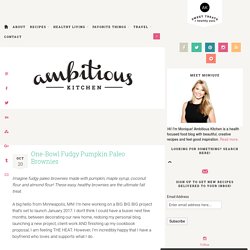 These easy, healthy brownies are the ultimate fall treat. A big hello from Minneapolis, MN! I’m here working on a BIG BIG BIG project that’s set to launch January 2017. I don’t think I could have a busier next few months, between decorating our new home, redoing my personal blog, launching a new project, client work AND finishing up my cookbook proposal, I am feeling THE HEAT. This post is in partnership with Nuts.com. Chocolate Raspberry Brownies - Wholesome Patisserie. I thought the other day that i haven’t made brownies in quite a long time, so of course that meant i had to create a new brownie recipe for you! 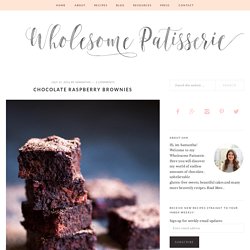 These fudgy slices of pure deliciousness are gluten free, rich, decadent and offer an amazing amount tart raspberries to cut through all of that chocolate, drooling! Zucchini Banana Brownies. Can you guess what makes these better-for-you brownies? 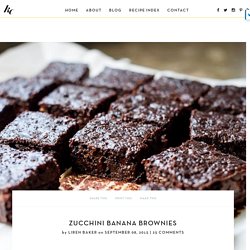 Zucchini, banana, and yes, leftover quinoa, make deep dark chocolate fudgy brownies that will entice even the pickiest eaters. It took us three (3!) Hours to drive to Sonoma. In the time it nearly takes to drive to Tahoe, we found ourselves crawling through the clogged highways snaking across the bay. Everyone, it seemed, was headed to wine country for the long holiday weekend. Vegan Chocolate Oatmeal Protein Bars. I know eating a brownie as a snack is in no way a healthy decision, but sometimes the chocolate cravings are so strong that you have to give in. 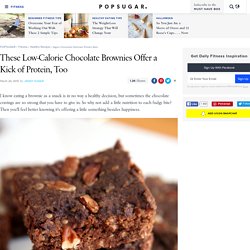 So why not add a little nutrition to each fudgy bite? Then you'll feel better knowing it's offering a little something besides happiness. A cross between oatmeal cookies and brownies, these chocolaty bars are so insanely delicious that you won't even guess there's protein powder added to the batter. The Recipe That Launched A Book Deal. Ella was at the University of St. 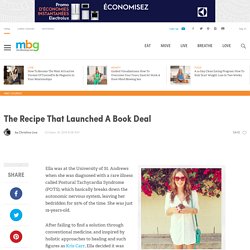 Andrews when she was diagnosed with a rare illness called Postural Tachycardia Syndrome (POTS), which basically breaks down the autonomic nervous system, leaving her bedridden for 95% of the time. She was just 19-years-old. After failing to find a solution through conventional medicine, and inspired by holistic approaches to healing and such figures as Kris Carr, Ella decided it was time to change her diet.

She had never been a fruit and veggie lover or a cook and describes her relationship to refined sugar before her illness as an addiction. Sesame + Sea Salt Dark Chocolate Brownies - Happy Hearted Kitchen. I spent a lot of time with my own thoughts this summer. 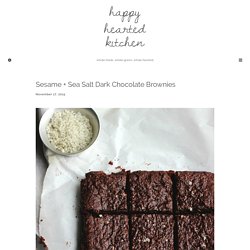 Yes, of course Matt + I would bike together more often than not, sometimes we’d just pedal and enjoy the quiet, sometimes Matt would sing made up songs without end and I’d try to tune him out and – if that failed – try to sing along. Sometimes we’d slowly take our own rhythm and I’d fall behind, just lost in my own day dreams. I remember spending some mornings going through Norway, winding through the fjords, not seeing Matt in the distance but knowing he wasn’t that far ahead, feeling solo but comforted all at the same time. And then some days, when I was lucky, I’d turn a corner and see him sitting at a picnic table in front of the sea, boiling water for our lunchtime pasta with the road map open on the table and, in that moment, I had all I could ever want. 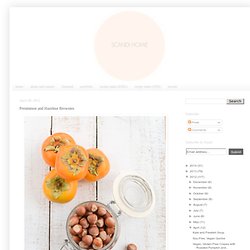 It is definitely my favourite time of the year and every week I get so excited to go to the farmers' markets just to see what is new and fresh. This past week persimmons came out to play and I just couldn't resist their sweet fragrance and orange flesh. It so happens that hazelnuts are also at their best so of course I had to combine the two autumn favourites. Not only are these brownies packed with season's best flavours, they are also vegan, gluten-free and very low in sugar. What could be better than that? Butternut Squash Brownies Recipe. Servings: 16 servings Level: Intermediate Winter squash like butternut, acorn, and kabocha is the perfect food for autumn seasons... and it dramatically helps curb sugar cravings too! 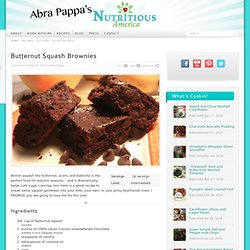 Keep in mind I'm someone who comes across hundreds of brownie recipes a year, it wasn't high on my to-do list to feature yet another brownie recipe. But the quirky ingredient list piqued my curiosity, and in the end the proof was in the pan. Raspberry & goat cheese brownies. This might be somewhat of a surprising thing to see here, considering I’m not a fan of goat cheese. But Jack is (that’s an understatement)… and literally this is all of his favorite things packed into one decadent dessert. Months ago, I saw this recipe on The Kitchn, and immediately knew I’d surprise him with it for his birthday. Of course I’m not going to sit by and watch him eat a pan of brownies all by himself. So I made two versions, a (non-dairy) cream cheese version for me, and this goat cheese version for him. (This was easy to split up without much extra work). Nigella Lawson's Lovely, Ravishing, Mesmeric Chocolate Pots Recipe Review.

When norcalgirl21 put in a request for a Lava Cake recipe, the first thing I thought of was Nigella Lawson's Choco-Hoto-Pots, although I like to refer to them simply as chocolate pots. This is a classic Nigella recipe: simple, quick and outrageously decadent. Warm, gooey, chocolatey heaven! I have yet to serve these and not have the conversation come to a halt, leaving only the sound of spoons scraping against porcelain and the occasional sigh of pleasure.Nigella's chocolate pots are delicious, truly greater than the sum of their parts which consist of basic pantry staples: chocolate chips, butter, eggs, sugar and flour.

That's it! They take literary five minutes to put together and can even be prepped in advance and baked off at the last minute to be served warm. Vegan Gluten Free Black Bean Brownies. It seems ludicrous to make your favorite recipes just once, but when you’re a food blogger sometimes you don’t have time for repeats! But, after making a similar version of these black bean brownies a couple years ago I couldn’t help but try them again. They’re fudgy, sweet, and still one of the best brownies I’ve had to date. Never mind they’re loaded with fiber, omega-3s and tons of other good-for-you ingredients. Just last week I attempted a vegan gluten free brownie recipe that was a total flop. They didn’t set at all and sort of remained “soup” in the pan. Dark Chocolate Zucchini Brownies.