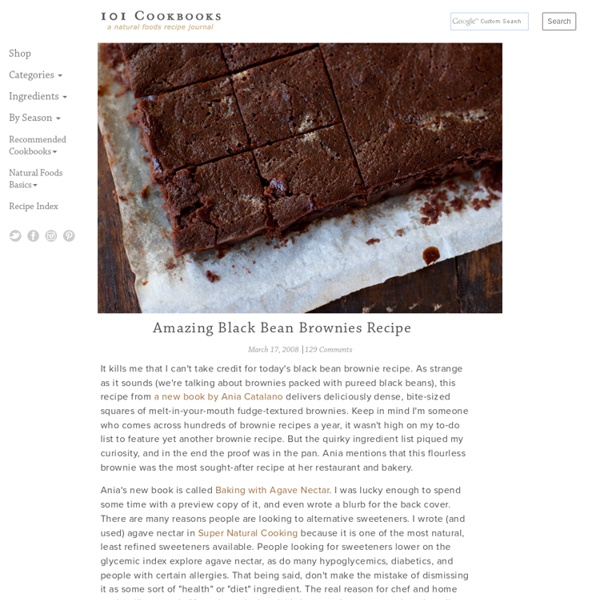 It kills me that I can't take credit for today's black bean brownie recipe. As strange as it sounds (we're talking about brownies packed with pureed black beans), this recipe from a new book by Ania Catalano delivers deliciously dense, bite-sized squares of melt-in-your-mouth fudge-textured brownies. Keep in mind I'm someone who comes across hundreds of brownie recipes a year, it wasn't high on my to-do list to feature yet another brownie recipe. But the quirky ingredient list piqued my curiosity, and in the end the proof was in the pan. Ania mentions that this flourless brownie was the most sought-after recipe at her restaurant and bakery. Ania's new book is called Baking with Agave Nectar. So, like I said - there are some quirky facets to this particular brownie recipe. - More Chocolate Recipes - - More Baked Goods Recipes - For those of you who have a hard time tracking down agave nectar (which is becoming much more readily available) substitute honey 1:1 for the agave nectar. Related:  Brownies

The Infamous Jacques Torres Chocolate Chip Cookies Now, I have a chocolate chip cookie recipe that I swear by. I love it, I think it is incredible, and I haven’t changed my mind about that. However, as much as it pains me to say it, these chocolate chip cookies by Jacques Torres are absolutely, without a doubt, the best chocolate chip cookies that I have ever made or tasted in my entire life. Either way, I made these and everyone that tried them went nuts. Edit: For more Jacques Torres deliciousness, check out my Jacques Torres Chocolate Mudslide Cookies! Your ingredients. Whisk together the cake flour, bread flour, baking soda, baking powder, and salt. Beat together the butter and sugars, until light and fluffy, at least 3 minutes. Beat in the eggs, one at a time, followed by the vanilla. Add in the flour mixture, very gradually, until just moistened. Fold in your chocolate. Now, press plastic wrap down onto the top of the dough, being sure it is completely covered, and refrigerate for a minimum of 24 hours. Author: The Crepes of Wrath

30 Foods You'll Never Have To Buy Again Black Soya Beans May Help Prevent Weight Gain - washingtonpost.com MONDAY, Feb. 26 (HealthDay News) -- New research in rats suggests that black soya beans may be a wonder food of sorts, helping to prevent obesity, lower cholesterol levels and possibly even reduce risks for diabetes. In a study published in the February issue of theJournal of the Science of Food and Agriculture, a team of Korean researchers studied the effects of black soya in 32 rats. The researchers allowed the rodents to gorge on a fatty diet supplemented with various levels of black soya. After two weeks, the rats getting 10 percent of their energy from black soya gained half as much weight as those in the control group, and their total blood cholesterol and LDL (so-called "bad") cholesterol fell by 25 percent and 10 percent, respectively. According to David Bender, sub-dean at the Royal Free and University College Medical School in London, soya protein may reduce the production of new fatty acids and cholesterol by affecting fat metabolism in the liver and adipose tissue. The U.S.

About cake Today, I thought it would be nice to talk about cake. Actually, that’s a lie. Today, I thought it would be nice to eat cake. That’s all. Anything else is completely optional. Lately, I’ve been thinking a lot about cake. The cake up there, the very plain-looking one in the pictures, is not a beauty, but it’s a bang-up solution to the problem. Everyday CakeInspired by Edna Lewis’s Busy-Day Cake I don’t ordinarily like baking with whole wheat flour, to be perfectly honest. 1 stick (4 oz.) unsalted butter, at room temperature1 ¼ cups granulated sugar3 large eggs2 tsp. vanilla extract1 cup unbleached all-purpose flour1 cup white whole wheat flour2 tsp. baking powder¼ tsp. saltA few gratings of nutmeg, or to taste½ cup whole milk or plain yogurt, at room temperature Preheat the oven to 375°F. In the bowl of a stand mixer, blend the butter and the sugar until light and fluffy. In a medium bowl, whisk together the flours, baking powder, salt, and nutmeg. Serve at room temperature.

Sparkling Ginger Lemonade I’ve been struggling with whether I should share this drink recipe with you at the start of November. I mean, what is more befitting than a cup of hot cocoa or apple cider on a chilly, sweater-wearing day, right? But then I’m thinking, this fizzy concoction really hits the spot as you’re indulging in all of those heavy, meat-centric, butter-laden comfort foods this time of the year! Once you make a batch of this ginger-infused simple syrup, you can store it in the fridge and make yourself a glass whenever you want something cool and refreshing. Sparkling Ginger Lemonade Ingredients ½ cup sugar ½ cup water 2-in piece fresh ginger, peeled and sliced thinly ½ cup fresh lemon juice Sparkling water In a saucepan, combine sugar, water, and ginger. Remove from heat and let the mixture cool to room temperature. Stir in lemon juice. Pour the mixture through a sieve and store in a clean jar with a tight lid.

Barb&#039;s Easy Stove-top Beans When we started the Eat Right for Your Type Blood Type Diet , we discovered that both of us were supposed to avoid pork and kidney beans and I was supposed to avoid tomatoes. Peter D'Adamo, who wrote the book linked to above which describes the diet, does say that you can eat a "forbidden" food if it's only a small percentage of the ingredients in a given dish. I decided that I would leave out the bacon and the kidney beans (for which I substituted white beans.) I also cut out the added brown sugar, but kept the molasses to taste. If I had Type O blood, as my husband does, I probably would have added a chopped bell pepper, red or green, with the onions and apple.

I mean it I would like to sit down here today and write as though everything were normal, as though I were actually capable of forming complete sentences. But the truth is, I am an absolute maniac. Tomorrow is the official release date for my book, a day that I never really trusted would come, and I feel alternately so ecstatic and so freaked out that I can’t decide whether I need to run around the block a few dozen times or lie down for a nap. In the meantime, I will eat some sweet potato pound cake. Many of you have written already(!) To those of you in the Seattle area: I will be at University Book Store tomorrow night - Tuesday, March 3 - at 7:00 pm. To those in the Portland area: I will be at Powell’s this Friday, March 6, at 7:30 pm. And an update on the Washington, DC event: a number of you e-mailed or left comments to express an interest in coming that night, but I now need a formal RSVP. And when I get back, I’ll have a new Delancey update for you. Preheat the oven to 350°F.

make-your-own-pizza party - hollywood housewife When we have the whole extended family at the lake each July, we each take a night to provide dinner, because otherwise trying to coordinate dinner for 25 people every evening is too arduous. This year my sister-in-law did a make-your-own-pizza dinner and it was so genius that I blatantly stole the idea and had one of my own over the weekend. It's so easy, and great for groups. Here's how I did it: After rolling out a big 'ole sheet of butcher paper onto my kitchen island, I plunked all the ingredients right on top and wrote the instructions on the paper. (I actually used painters paper from Home Depot because that's what I had in the garage.) We grilled the pizzas instead of baking them, saving tons of time and mess. Guests were instructed to coat their naan with olive oil to avoid burning on the grill. Then, toppings! There was pizza sauce, obviously (I just used Ragu pizza sauce - shhhhhh, don't tell) and loads of cheese. Our friends loved it!

Dark Chocolate Zucchini Brownies Veggies in chocolate form? I'm all over it! With home gardens and farmer's markets overflowing with zucchini, this is a great time to make a batch of these zucchini brownies. They are amazingly rich and moist and will particularly satisfy those chocolate lovers out there. I knew zucchini brownies were meant to be when King-Man came home from work with a GIGANTIC homegrown zucchini brought to him by our friend, Terry. We're wondering if Terry's husband, Robert, has been feeding their zucchini steroids. Healthified! reduced the amount of sugarreduced the amount of oil used coconut oil (for it's health benefits and flavor); you can use vegetable oil or melted butter if you preferadded yogurt (replaced some oil and adds moisture and nutrients)used 100% whole grain flour (no white stuff at all)omitted eggs entirely (not that they're bad for you, but they're unecessary)used dark cocoa powder (higher in antioxidants), although you can use regular cocoa, too Vegan & Dairy-Free options. Step 1.