Super Fudgy Brownies Recipe on Food52. Fudgy Black Bean Brownies. I had tried other black bean brownie recipes before, but they had more of a cake-like consistency and just tasted "off. 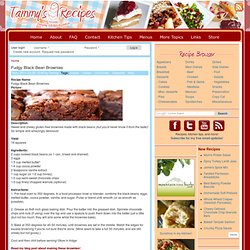 " I admit I was skeptical when I saw the title of "fudgy", but these were fantastic. Mine needed only 35 minutes in the oven, and they were very moist and fudgy. I used honey instead of sugar and just eyeballed the amount. I was worried at first when the batter seemed very runny, but I couldn't have asked for a better end product. World’s healthiest brownie. Peanut Butter Brownie Bites. Magic Espresso Brownies Recipe on Food52. Healthy Zucchini Brownies : Baltic Maid. Posted on | August 1, 2011 | 75 Comments Yes, you read right I mentioned the words healthy and zucchini in connection with brownies. 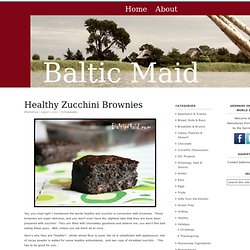 These brownies are super delicious, and you won’t even have the slightest idea that they are have been prepared with zucchini! They are filled with chocolatey goodness and believe me, you won’t feel bad eating these guys. Well, unless you eat them all at once… Here’s why they are “healthy”: whole wheat flour is used; the oil is substituted with applesauce; lots of cocoa powder is added for some healthy antioxidants; and two cups of shredded zucchini… This has to be good for you… And the best of it all, they taste absolutely incredible. 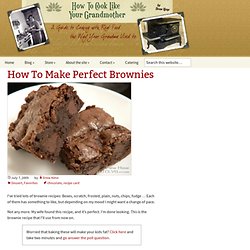 Not any more. My wife found this recipe, and it’s perfect. I’m done looking. This is the brownie recipe that I’ll use from now on. Ingredients 1½ cups sugar ¾ cup flour ¾ cup cocoa powder (see note below) 3 eggs ¾ cup butter, melted ½ teaspoon salt (if using unsalted butter) ¾ cup semi-sweet chocolate chips (see note below) Directions A NOTE ON CHOCOLATE: You’ll notice the list of ingredients is very short. The assembly is about as easy as you can get. Do this by hand, until the dry ingredients are just incorporated into the wet, and stop. Stir in the chocolate chips. Line a 9×13 baking dish with parchment. Pour the batter and spread it out. Bake at 325° for 20-30 minutes. Very carefully lift the parchment out of the baking dish. Peel the edges and let cool for a few minutes before slicing. 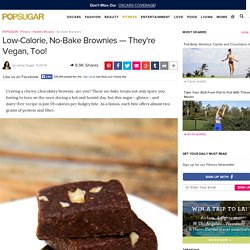 These no-bake treats not only spare you having to turn on the oven during a hot and humid day, but this sugar-, gluten-, and dairy-free recipe is just 59 calories per fudgey bite. As a bonus, each bite offers almost two grams of protein and fiber. Just throw everything into your food processor, press into a pan, pop in the fridge to firm, and within an hour you'll be biting into these decadent, delicious brownies. And yes, they do taste divine with a scoop of vanilla ice cream on top. Secretly Healthy Chocolate Brownie Cookies. Christmas and cookies might as well be synonyms. 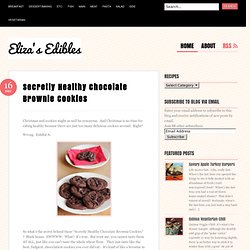 (inspired by this recipe!) Sweet Potato Brownies. If asked what my favourite foods in the world were the list would be: sweet potatoes, dates, cacao, raw brownies and avocado. 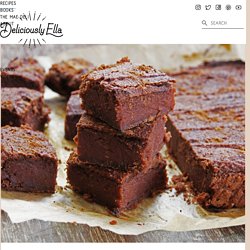 So it seems only natural to try and combine at least four of the five in some way to create something insanely awesomely, which is exactly what I did in these sweet potato brownies. I have to admit that when I made these I was beyond excited, like really way too over excited. I was jumping around a lot, making a lot of ‘mmmmm… delicious… wow… these are outrageous… can you believe it’ type noises! Anyway I was so excited that I told everyone that would listen about my new creation – but the response was a little mixed, most people seemed to think the idea of making dessert from a vegetable was too bizarre and maybe I’d taken my healthy baking a step too far!

How to make chocolate brownies in a skillet (without an oven!) Vegan Brownie Recipe. Sometimes, only a decadent chocolate fix will do; that's where these brownies come into play. 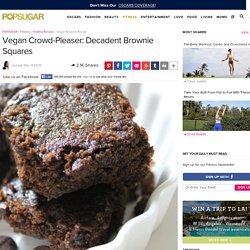 While they're not exactly guilt-free, nutritionist Cynthia Sass created these vegan spinach brownies to help you add a few nutrients to your dessert. Mixing in almond flour increases the protein and healthy fat content of these vegan brownies, and the secret ingredient, spinach, adds antioxidants (also found in the dark chocolate chips), iron, vitamin A, calcium, and other nutrients, as well.

And since these vegan brownies taste just as delicious as a traditional brownie, they'll be a hit with anyone and everyone. Get ready to bake! Notes I doubled the amount of the original recipe with the same-size pan because I wanted to make thicker brownies; check out our video recipe to see the original. Ingredients Directions Makes 20 brownie squares. Superhot Brownies Recipe on Food52.