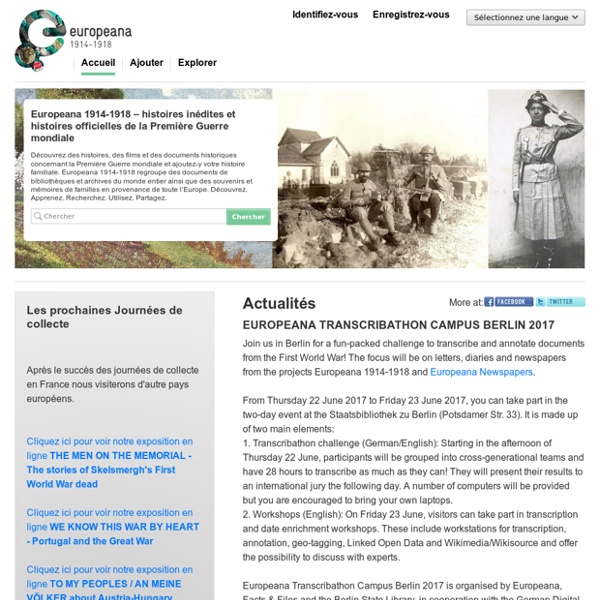 World War I (1914–1919): Overview World War I took place between 1914 and 1918. Although the conflict began in Europe, it ultimately involved countries as far away as the United States and Japan. At the time, the English-speaking world knew it as the “Great War”—the term “World War I” was applied decades later. Historians still actively disagree over the fundamental causes of the war. The period leading up to the war was a complex tangle of diplomacy and political maneuvering—many countries debated over strategies and alliances until nearly the last minute—and the first few weeks of the conflict were similarly chaotic and confusing.

Digitised Manuscripts The Digitised Manuscripts site contains many different kinds of manuscripts, archives and documents. Much of the content available here has been digitised as part of the British Library’s digitisation projects, details of which are given below. Greek Manuscripts There are more than 600 Greek manuscripts ranging in date from the 9th century to the 18th century included in the Digitised Manuscripts site. These were digitised during two phases of a project funded generously by the Stavros Niarchos Foundation between 2008 and 2010. Sassoon Journals Diaries and journals can be among the most intimate and revealing of texts, offering accounts of their authors' lives with minimal literary artifice or mediation. Considered as physical objects, too, they accrue the fascination of having travelled with the writer through the events described in their pages. The notebooks kept by the soldier-poet Siegfried Sassoon (1886-1967) during his service in the British Army in the First World War are among the most remarkable documents of their kind, and provide an extraordinary insight into his participation in one of the defining conflicts of European history.

Untold Stories of the First World War Photos, letters and other memorabilia It was the war that tore Europe apart – a struggle between the central powers of Germany, Austria-Hungary, Turkey and Bulgaria, against the allied powers of Britain, France, Belgium, Russia, Italy and the USA. No European nation was left untouched – even neutral states felt the impact of the war. The British Library Digital Catalogue of Illuminated Manuscripts You can • perform a quick search (this searches for a word or number in all sections of each catalogue entry, including images); • perform a simple search using keywords and dates; • look for information about a particular manuscript if you know its collection name and manuscript number; • perform an advanced search using different types or combinations of information; • explore the virtual exhibitions of various aspects of the British Library's western illuminated manuscript holdings; and • check the illustrated glossaries of terms. • download digital images for further reuse such as in educational contexts, placing on your blog or sharing with others. Please see guidance notes on Access and Reuse. Updated 23 March 2018.

First World War internment camps a dark chapter in Canadian history Though the main battles of the First World War were fought across the ocean, back in Canada, there were prisoners and casualties of another kind. In 1914, immigrants from Austria-Hungary, Germany and the other Central Powers were rounded up and locked away in internment camps. More than 8,000 people who considered themselves Canadian were imprisoned for being “enemy aliens.” For many, it’s a dark secret.

An Illustrated Guide to Medieval Love Oh, Valentine’s Day: romance is in the air, passions are running high, the sense of anticipation and excitement is building…but – alas! – you are alone. How do you catch that man/woman/animal of your dreams? Despair not, oh singletons! BBC Schools - Life in the trenches 31 October 2014Last updated at 15:07 Two British soldiers standing in a flooded communication trench during World War One On the Western Front, the war was fought in trenches. Trenches were long, narrow ditches dug into the ground where soldiers lived all day and night. Causes of World War I Germany, France, Russia, Austria-Hungary, and Britain attempting to keep the lid on the simmering cauldron of imperialist and nationalist tensions in the Balkans to prevent a general European war. They were successful in 1912 and 1913, but did not succeed in 1914. The crisis came after a long and difficult series of diplomatic clashes between the Great Powers (Italy, France, Germany, Britain, Austria-Hungary and Russia) over European and colonial issues in the decade before 1914 that had left tensions high. In turn these diplomatic clashes can be traced to changes in the balance of power in Europe since 1867.[2] The more immediate cause for the war was tensions over territory in the Balkans. Austria-Hungary competed with Serbia and Russia for territory and influence in the region and they pulled the rest of the Great Powers into the conflict through their various alliances and treaties.