Install and Configure the Atom Editor for Python. In this post we’ll talk about the Atom editor which is, as they say, A hackable text editor for the 21st Century. 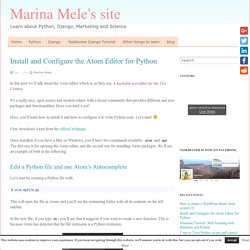 It’s a really nice, open source and modern editor, with a broad community that provides different and new packages and functionalities. Have you tried it yet? Here, you’ll learn how to install it and how to configure it to write Python code. Let’s start! First, download Atom from the official webpage. 8 Tools That Show What's on the Horizon for Python.

Galvanize recently attended the Dato Data Science Summit in San Francisco, a gathering of more than 1,000 data scientists and researchers from industry and academia to discuss and learn about the most recent advances in data science, applied machine learning, and predictive applications. 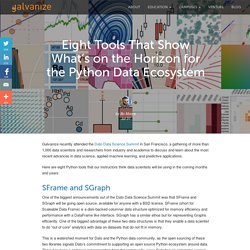 Here are eight Python tools that our instructors think data scientists will be using in the coming months and years: SFrame and SGraph One of the biggest announcements out of the Dato Data Science Summit was that SFrame and SGraph will be going open source, available for anyone with a BSD license. Multivariate Techniques in Python: EcoPy Alpha Launch! I’m announcing the alpha launch of EcoPy: Ecological Data Analysis in Python. 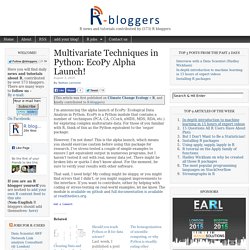 EcoPy is a Python module that contains a number of techniques (PCA, CA, CCorA, nMDS, MDS, RDA, etc.) for exploring complex multivariate data. For those of you familiar with R, think of this as the Python equivalent to the ‘vegan‘ package. However, I’m not done! This is the alpha launch, which means you should exercise caution before using this package for research.

I’ve stress-tested a couple of simple examples to ensure I get equivalent output in numerous programs, but I haven’t tested it out with real, messy data yet. That said, I need help! Related. Meet Jiphy, the Python-to-JavaScript and JavaScript-to-Python Code Converter. Developer Timothy Crosley has put together a tiny Python module that can go over Python files and convert the code into their analogue JavaScript syntax and vice versa. 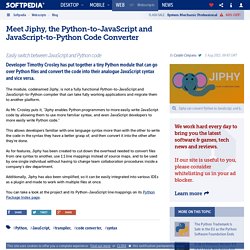 The module, codenamed Jiphy, is not a fully functional Python-to-JavaScript and JavaScript-to-Python compiler that can take fully working applications and migrate them to another platform. As Mr. Crosley puts it, "Jiphy enables Python programmers to more easily write JavaScript code by allowing them to use more familiar syntax, and even JavaScript developers to more easily write Python code. " This allows developers familiar with one language syntax more than with the other to write the code in the syntax they have a better grasp of, and then convert it into the other after they're done. Technical Blog of Igor Gnatenko. InkSlide. InkSlide - quick and easy presentations using Inkscape InkSlide produces slides like this: from simple text input like this: InkSlide: Features ++++++++++++++++++ Features include wrapped top level text and - mulitple - levels - of wrapped bulleted lists with bullets and font information taken from the template file. 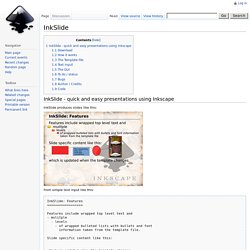 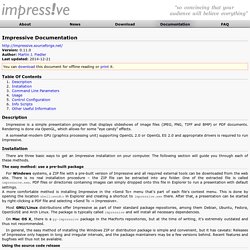 Python and QRCodes. Few days ago, I decided to try to generate QRCodes. 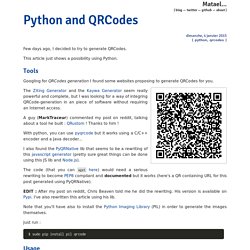 This article just shows a possibility using Python. Googling for QRCodes generation I found some websites proposing to generate QRCodes for you. The ZXing Generator and the Kaywa Generator seem really powerful and complete, but I was looking for a way of integring QRCode-generation in an piece of software without requiring an Internet access. Might use this. Python JIRA. Microsoft embraces Python, Linux in new big data tools. Continuing its quest to make Microsoft Azure comfy for the non-Windows world, Microsoft just launched a preview of its Hadoop-based cloud tool (HDInsight) that runs on Linux. 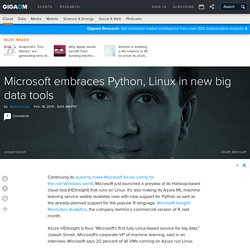 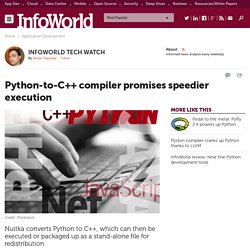 Python is a classic example, with most of the replacements for its default interpreter written to speed up execution of the language. Among the latest and most intriguing is Nuika. Nuika (open source on GitHub) compiles Python to C++ code, which can then be executed in-place or packaged up as a stand-alone file for redistribution. Unlike some other replacements for existing Python interpreters, it claims full compatibility with all the language constructs in Python 2.6, 2.7, 3.2, and 3.3. According to the project's lead, Kay Hayen, Nuitka's first milestone -- feature parity with the language -- has already been met. To work its magic, Nuitka requires both a current version of the Python interpreter (2.x or 3.x branch) and a C++ compiler. Another drawback is the creation of stand-alone executables. PyCharm Early Preview - PyCharm. Dear colleague, Welcome to the Private Preview Program for PyCharm Educational Edition. 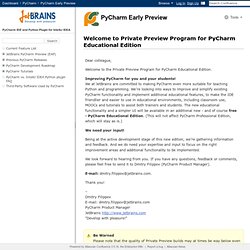 Welcome to the tox automation project — tox 1.7.2 documentation. First, install tox with pip install tox or easy_install tox. Then put basic information about your project and the test environments you want your project to run in into a tox.ini file residing right next to your setup.py file: # content of: tox.ini , put in same dir as setup.py[tox]envlist = py26,py27[testenv]deps=pytest # install pytest in the venvscommands=py.test # or 'nosetests' or ... Welcome to Py4J — Py4J. Sublime Text 3 for Python, JavaScript and web developers. Sublime Text is a very powerful programmer’s text editor and popular among web and dynamic language developers (Python, Ruby, JavaScript). The editor is commercial (59 USD), though this is enforced through a nagging dialog only.

Plenty of Sublime Text’s power comes from the fact that Sublime has vibrant community-maintained plugin ecosystem. This blog post is revised from an old Sublime Text 2 blog post how to tune your Sublime Text to be a powerful platform. As the writing of this (March 2014) Sublime Text 3 is in public beta and the plugin development for the older Sublime Text 2 is slowly stalling. The most popular plugins have been ported to Sublime Text 3, so if you are a ST2 user should start considering migration to the new version. Serge-sans-paille/pythran. IPython founder details road map for interactive computing platform.

IPython, for "interactive Python," has been gathering steam as a mechanism for interactive computing and data analysis and visualization. It features the IPython Notebook, which provides a Web-based computational environment that combines code execution, text, mathematics, plots, and rich media. The open source IPython project was invented by Fernando Perez while at the University of Colorado in 2001, and a formal version 1.0 was released last year. Perez, who is a now a research scientist in the Brain Imaging Center at the University of California, Berkeley, sat down with InfoWorld Editor at Large Paul Krill at the recent Strata conference in Silicon Valley to talk about IPython, including its genesis, applications, and a road.map for its future. InfoWorld: What exactly is IPython and what's the main use of it?

Enthought Announces the Worldwide Launch of Its Python for Excel Solution. Austin, Texas (PRWEB) February 06, 2014 Enthought, Inc., a leading provider of scientific and analytic software powered by Python, today announced its partnership with PyXLL Ltd. to become the exclusive worldwide distributor of PyXLL, a powerful tool used to create add-ins for Microsoft Excel in the Python programming language. This new partnership gives PyXLL customers the support of Enthought’s distinguished development team and offers Enthought Canopy customers an integrated solution for deploying to Excel.

Hottest 'mechanize-python' Answers. Powerful Python IDE PyCharm Community Edition Now Available For Free. Developer JetBrains is well-known for their sophisticated IDEs (integrated developer environments), but their tools usually cost money to use. That is not always the case, however. The company has recently released a new version of their PyCharm IDE in two different flavors, one of which is entirely free. Main.py.