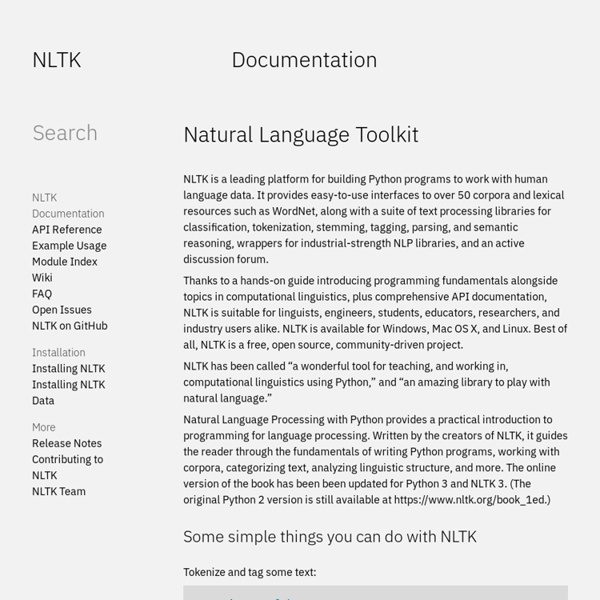 NLTK is a leading platform for building Python programs to work with human language data. It provides easy-to-use interfaces to over 50 corpora and lexical resources such as WordNet, along with a suite of text processing libraries for classification, tokenization, stemming, tagging, parsing, and semantic reasoning. Thanks to a hands-on guide introducing programming fundamentals alongside topics in computational linguistics, NLTK is suitable for linguists, engineers, students, educators, researchers, and industry users alike. NLTK is available for Windows, Mac OS X, and Linux. Best of all, NLTK is a free, open source, community-driven project. NLTK has been called “a wonderful tool for teaching, and working in, computational linguistics using Python,” and “an amazing library to play with natural language.”

Terminology Extraction Introduction Terminology is the sum of the terms which identify a specific topic. Extracting terminology is the process of extracting terminology from a text. Neil deGrasse Tyson Neil deGrasse Tyson (/ˈniːəl dəˈɡræs ˈtaɪsən/; born October 5, 1958) is an American astrophysicist, author, and science communicator. He is currently the Frederick P. Rose Director of the Hayden Planetarium at the Rose Center for Earth and Space and a research associate in the department of astrophysics at the American Museum of Natural History. From 2006 to 2011, he hosted the educational science television show NOVA ScienceNow on PBS and has been a frequent guest on The Daily Show, The Colbert Report, Real Time with Bill Maher, and Jeopardy!. 12 open source tools for natural language processing Natural language processing (NLP), the technology that powers all the chatbots, voice assistants, predictive text, and other speech/text applications that permeate our lives, has evolved significantly in the last few years. There are a wide variety of open source NLP tools out there, so I decided to survey the landscape to help you plan your next voice- or text-based application. For this review, I focused on tools that use languages I'm familiar with, even though I'm not familiar with all the tools.

Welcome — Theano 0.9.0 documentation Theano is a Python library that allows you to define, optimize, and evaluate mathematical expressions involving multi-dimensional arrays efficiently. Theano features: tight integration with NumPy – Use numpy.ndarray in Theano-compiled functions.transparent use of a GPU – Perform data-intensive computations much faster than on a CPU.efficient symbolic differentiation – Theano does your derivatives for functions with one or many inputs.speed and stability optimizations – Get the right answer for log(1+x) even when x is really tiny.dynamic C code generation – Evaluate expressions faster.extensive unit-testing and self-verification – Detect and diagnose many types of errors. Theano has been powering large-scale computationally intensive scientific investigations since 2007.

Python Course: Modular Programming and Modules Modular Programming If you want to develop programs which are readable, reliable and maintainable without too much effort, you have use some kind of modular software design. Especially if your application has a certain size. There exists a variety of concepts to design software in modular form. Pattern Pattern is a web mining module for the Python programming language. It has tools for data mining (Google, Twitter and Wikipedia API, a web crawler, a HTML DOM parser), natural language processing (part-of-speech taggers, n-gram search, sentiment analysis, WordNet), machine learning (vector space model, clustering, SVM), network analysis and <canvas> visualization. The module is free, well-document and bundled with 50+ examples and 350+ unit tests.

Erik Verlinde Erik Peter Verlinde (born 21 January 1962) is a Dutch theoretical physicist and string theorist. He is the identical twin brother of physicist Herman Verlinde. The Verlinde formula, which is important in conformal field theory and topological field theory, is named after him. His research deals with string theory, gravity, black holes and cosmology. Currently he works at the Institute for Theoretical Physics at the University of Amsterdam.

5. Data Structures This chapter describes some things you’ve learned about already in more detail, and adds some new things as well. 5.1. More on Lists The list data type has some more methods. Open Book Project by Peter Wentworth, Jeffrey Elkner, Allen B. Downey, and Chris Meyers 3rd Edition (last updated 10/6/12)2nd Edition (last updated 4/21/12) What's the difference among these versions? Which one should I use? In brief, the 2nd Edition uses Python 2, and will be gradually abandoned.