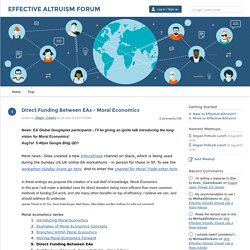 In this post I will make a detailed case for direct donation being more efficient than more common methods of funding EA work, and cite many other benefits on top of efficiency. I believe we can and should address its underuse. Special Thanks to Eli Tyre, Dave Dekenberger, Matt Reyes, Giles Edkins and Ben Hoffman for edits and comments. Moral economics series Introducing Moral EconomicsExamples of Moral Economics ConceptsBranches Within Moral EconomicsMoving Moral Economics ForwardDirect Funding Between EAsCertificates of Impact, Doing It Right - Giles EdkinsMoral market failure: how COIs might helpProblems with COIs, and their solutionsImplementing COIsAgential Identity in Moral Economics.

Effective Altruism and Utilitarianism. I think it’d be interesting to discuss the relationship between effective altruism and utilitarianism (or consequentialism more broadly). 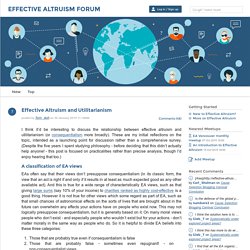 These are my initial reflections on the topic, intended as a launching point for discussion rather than a comprehensive survey. (Despite the five years I spent studying philosophy - before deciding that this didn’t actually help anyone! - this post is focused on practicalities rather than precise analysis, though I’d enjoy hearing that too.) Introducing Moral Economics. Moral Economics On the shoulders of: Altruistic Arbitrage, Certificates of Impact, Cognitive Load and Effective Donation, Coordination Problems for Donations, Donation Swapping, International Donation Trade, Direct Funding for EAs and specially Moral Trade. 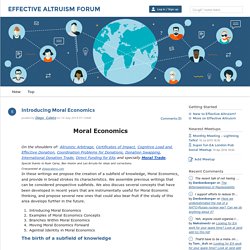 Special thanks to Ryan Carey, Ben Hoskin and Leo Arruda for ideas and corrections. Crossposted at diegocaleiro.com In these writings we propose the creation of a subfield of knowledge, Moral Economics, and provide in broad strokes its characteristics. Should You Visit an EA Hub? This a post co-written by Brenton Mayer and Peter McIntyre. 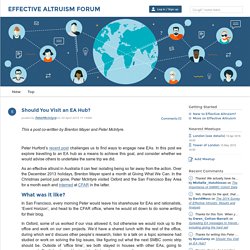 Peter Hurford’s recent post challenges us to find ways to engage new EAs. In this post we explore travelling to an EA hub as a means to achieve this goal, and consider whether we would advise others to undertake the same trip we did. As an effective altruist in Australia it can feel isolating being so far away from the action. Over the December 2013 holidays, Brenton Mayer spent a month at Giving What We Can. In the Christmas period just gone, Peter McIntyre visited Oxford and the San Francisco Bay Area for a month each and interned at CFAR in the latter. Non-English language effective altruism (including a list of venues) Does anyone have thoughts or reports on non-English language effective altruism? 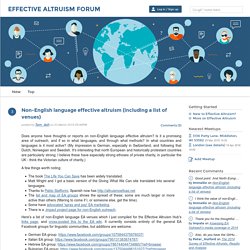 Is it a promising area of outreach, and if so in what languages, and through what methods? In what countries and languages is it most active? (My impression is German, especially in Switzerland, and following that Dutch, Norwegian and Swedish. It's interesting that north European and historically protestant countries are particularly strong; I believe these have especially strong ethoses of private charity, in particular the UK - think the Victorian culture of charity.) The 2014 Survey of Effective Altruists: Results and Analysis. It's my great pleasure to announce that, after seven months of hard work and planning fallacy, the EA Survey is finally out. 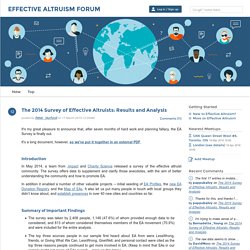 It's a long document, however, so we've put it together in an external PDF. Introduction. Can we set up a system for international donation trading? In the future I'll probably want to donate to a UK charity (Humane Slaughter Association). 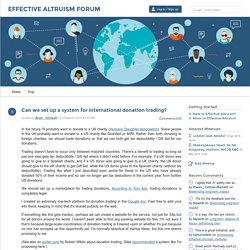 Some people in the UK probably want to donate to a US charity like GiveWell or MIRI. Rather than both donating to foreign charities, we should trade donations so that we can both get tax deductibility / Gift Aid for our donations. Trading doesn't have to occur only between matched countries. There's a benefit to trading so long as just one side gets tax deductibility / Gift Aid where it didn't exist before. For example, if a UK donor was going to give to a Spanish charity, and if a US donor was going to give to a UK charity, the UK donor should give to the UK charity to get Gift Aid, while the US donor gives to the Spanish charity (without tax deductibility). Estimating the cost-effectiveness of research. At a societal level, how much money should we put into medical research, or into fusion research? 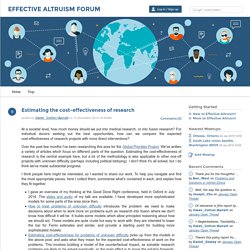 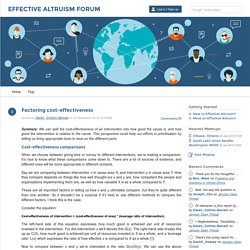 This perspective could help our efforts in prioritisation by letting us bring appropriate tools to bear on the different parts. Cost-effectiveness comparisons When we choose between giving time or money to different interventions, we’re making a comparison. It’s nice to know what these comparisons come down to. There are a lot of sources of evidence, and different ones will be more appropriate in different contexts. Say we are comparing between intervention x in cause area X, and intervention y in cause area Y. These are all important factors in telling us how x and y ultimately compare, but they’re quite different from one another. Consider the equation: Cost-effectiveness of intervention = (cost-effectiveness of area) * (leverage ratio of intervention) Now to compare between x and y we’re interested in the ratio G(x)/G(y). [cross-post] Does donation matching work? - Effective Altruism Forum. In the effective altruism community, donation matches are becoming very popular. 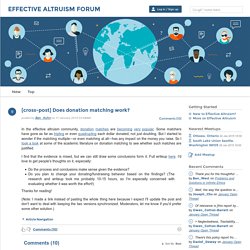 Some matchers have gone as far as tripling or even quadrupling each dollar donated, not just doubling. But I started to wonder if the matching multiple—or even matching at all—has any impact on the money you raise. What small things can an EA do? How can we make the world a better place? Effective altruism encourages people to think deeply about how to prioritize their time to make the most difference. However, frequently doing something and starting somewhere is a lot better than just thinking and ending up not doing anything. So here's a quick list of things that EAs can do. Donate Smarter This is perhaps the most classic option for an effective altruist.

The Moral Imperative Towards Cost-effectiveness. By Toby Ord, originally on the Giving What We Can website Cost-effectiveness is one of the most morally important issues in global health. This claim will be surprising to many, since conversations about the ethics of global health usually focus on more traditional moral issues such as justice, equality, and freedom. How Not to Be a "White in Shining Armor" By Holden Karnofsky, originally on the GiveWell Blog GiveWell’s current top-rated charities focus on proven, cost-effective health interventions.

These interventions appear to solve certain problems (malaria, parasites) quite well, while making no direct attempt to solve other problems (economic growth, education, gender equity, and more). One of the common lines of objection we get to these recommendations goes something like: “Why should I put all my money into fighting malaria, ignoring other important problems? Isn’t it unethical to ignore the other essential needs?” We believe this objection commits the common fallacy of viewing the developed-world donor as the only person who can improve things for the beneficiaries. How I Raised $5010.32 for AMF and How You Can Too! This essay is my entry into the December edition of Figuring Good Out, the effective altruism blogging carnival. This month’s topic is "blind spots". What is effective altruism? Most forms of do-gooding start out with a What (“I want to promote microfinance!”) , move to a How (“maybe I should do a sponsored marathon?”) And simply take the Why for granted (“because of course microfinance is good!”).