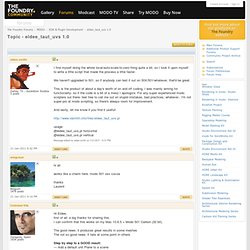 The good news: it produces great results in some meshesThe not so good news: it fails at some point in others. Step by step to a GOOD result:— Add a default unit Plane to a scene— Subdivide facetted 4 times— Select some random inner horizontal and vertical loops and delete them (to create a non-uniform distribution)— Go to default UVs (“Texture”)— Apply a small Jitter Deformation to UVs (Range X and Y, 2cm)— Select all horizontal loops in UV view— Call @eldee_taut_uvs.pl horizontal— Perfect result! It rectifies the loop maintaining the spacement proportionally. GREAT! — There is a workaround for these Thorus and “closed-tube” structures: select the boundary edges in the UVs, apply a SPLIT, and then perform your script. 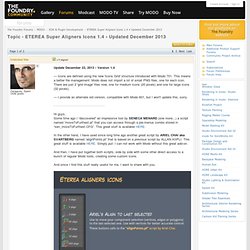 This means a better file management: Modo does not import a lot of small PNG files, one for each icon. There are just 2 'grid image' files now, one for medium icons (20 pixels) and one for large icons (32 pixels). — I provide an alternate old version, compatible with Modo 601, but I won't update this, sorry. Hi guys,Some time ago I “discovered” an impressive tool by SENECA MENARD (one more...) a script named “moveToFurthest.pl” that you can access through a pie-menus combo stored in “sen_moveToFurthest.CFG”. In the other hand, I have used since long time ago another great script by ARIEL CHAI aka SVARTBERG named “alignPoints.pl” that is based on a previous script by ALLAN KIIPLI.

And then, I have put together both scripts, side by side with some other direct access to a bunch of regular Modo tools, creating some custom icons. 1. 2. Forum > having some trouble with a really simple script. Forum > Seneca's latest modo scripts (12-18-10) Forum > Problem with Modo and Cinema UVs [SOLVED] Hi guys, I have made this question in a good Cinema forum (here) but maybe some of you could help me with this, since is related with Modo too... 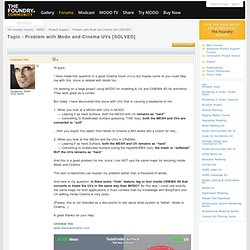 Forum > workflow with clamp colors turned off ? Forum > realflow to modo. Forum > mastering modo through it's tool presets and hotkeys. 8 – when I can’t remember a hotkey I use my script to find it for me. 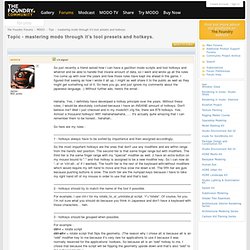 My print_hotkeys.pl script is handy. You just type in a term and it’ll print all the hotkeys that are using that term. This script has saved my ass a gazillion times and I can’t believe that modo doesn’t have this built into their application yet. Oh, and I dunno if this script works with Japanese text or not.. heh. 9 – now let me go over my hack to get actrs to be retained after custom tool drops So lemme go over the rules in modo again real quickly: A – if you turn off a tool preset that has bunch of special modifiers saved into it, all those modifiers get dropped as well when you drop the tool.B – if you have an actr on and then turn on a tool preset that has an actr saved into it, modo will put you in “(none)” actr. So! In those three examples, there’s three special cases.

So all your tools will be fixed once you rebind your hotkeys. Forum > STL Plugin (updated) Hi there, As at 17-September-2012 Note: OSX version appears flawed and crashes modo. 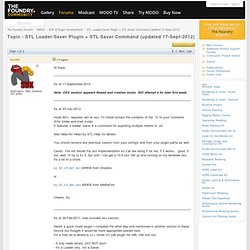 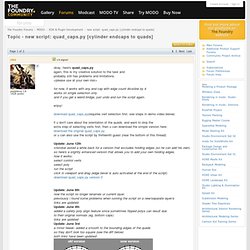 And the x4 sides limitation is not a hard thing, at all, IMHO. The thing that would be very interesting is to allow some kind of better aligning. For example:— open a clean scene,— add a default unit cylinder (you know, CTRL+click)— select top cap— apply your script We get it, cool. But if we look from top, the inner square is rotated, not aligned with axis. This image could illustrate better what I mean (the second figure has beed rotated manually): Maybe, the procedure could be something like this: — add a default unit cylinder,— select top cap polygon— now go to Vertex mode and select a vertex that you want to control the inner square orientation— change again to Poly mode— apply your (modified) script Yes, I know: it's easy to write these orders in plain English.

In any case, and again: THANKS for sharing this, Ylaz. PD. Cristóbal Vilaetereaestudios.com. Forum > buzzGreeble 1.0b. Forum > Python script to export selected or export one mesh at a time into OBJ.