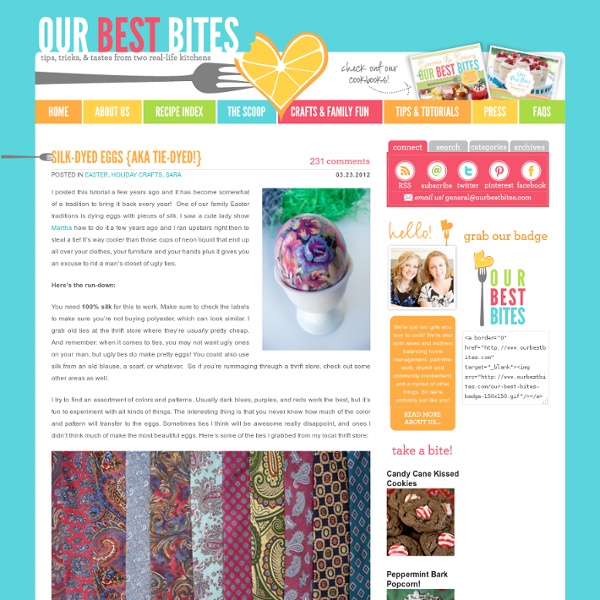 I posted this tutorial a few years ago and it has become somewhat of a tradition to bring it back every year! One of our family Easter traditions is dying eggs with pieces of silk. I saw a cute lady show Martha how to do it a few years ago and I ran upstairs right then to steal a tie! It’s way cooler than those cups of neon liquid that end up all over your clothes, your furniture and your hands plus it gives you an excuse to rid a man’s closet of ugly ties. Here’s the run-down: You need 100% silk for this to work. I try to find an assortment of colors and patterns. Usually it will tell you if it’s 100% silk right on the main label of the tie, but a lot of them don’t, and if that’s the case, check that little tiny end, it’s usually hiding there. The first step is to deconstruct the tie. Next you cut a piece large enough to cover an egg. Now, notice how I tied the eggs in the above photo- with the tie on the top of the long side of the egg. I wish eggs came like this at the grocery store.

How to Turn a Glove into a Chipmunk While gloves and socks are made to be forever together, often they choose to divorce and spend their lives in a solitude. Of course, we have to respect their decision, but it’s hard to look at them being all lonely, laying somewhere in the backs of a drawers. Luckily, crafter and author Miyako Kanamori has a wonderful solution! A dog’s seeing eye dog Lily is a Great Dane that has been blind since a bizarre medical condition required that she have both eyes removed. For the last 5 years, Maddison, another Great Dane, has been her sight. The two are, of course, inseparable. Men's Scuffs Printer-friendly version Send by email PDF version Materials Required— AMERICAN THREAD COMPANY "STAR" RUG YARN, Article 44 3-80 yd. 20 Awesome Do It Yourself Projects Thursday, June 14, 2012 4:30 am, Posted by Chris Groves | Internet 20 Awesome Do It Yourself Projects Topics: At Home Project Ideas , Creative DIY Home Projects , Do It Yourself Projects for 2012 , Fun How To Projects , What to Do with Extra Stuff Are you bored and have a bunch of extra little items hanging around here and there? Well we were in the same boat so we decided to round up 20 different awesome at home projects you can do. Anything from soda pop cap lids to spoons and more.

Boho Maxi Dress: a tutorial This dress is an incredibly easy make. By now you may have realized that I'm all about the simple projects. I'm far from being a master seamstress, I just work with what I know and try to learn as I go. I've never actually owned a maxi dress before, but now I might be hooked. They're so comfy and they have the added benefit of hiding my neglected, less-than-hairless legs. DIY Solar Bottle Bulb If you don’t have electricity or live in a home with no windows, it’s going to be dark inside, even during a sunny day. Luckily, a bottled liter of water with some bleach can provide approximately 55-60 watts of light from the sun. This simple idea has helped many dwellers in the light-deprived slums of the Philippines. “A Liter of Light” is a sustainable lighting project by Illac Diaz which aims to bring the eco-friendly Solar Bottle Light to disprivileged communities worldwide.

The Fascinating Buddhist Approach to Low Self-Esteem Photo Credit: Shutterstock March 19, 2012 | Like this article? Join our email list: Stay up to date with the latest headlines via email. While many therapists have begun to incorporate mindfulness into their work, additional Buddhist practices hold potential for helping clients, particularly those suffering from low self-esteem. strikkefrenzys 14 Totoros The dolls in this pattern were too sugar cute for me, although I think they look great. In my head, I had 3 versions, maybe I can inspire someone to make the other two? - here they are: I. The just as sugar cute version: Since one of my passions is diving, I wanted to use the free sea horse pattern found HERE.

Christmas tree ornament mobile, how-to Here is how I made my Christmas tree ornament mobile, it was easier than it looks, promise. The Supplies a 17″ steamer rack from a restaurant supply storeabout 5 feet of lightweight jack chaina small carabiner100 basic ornament hooksone roll, 500 feet, monofilament jewelry string (not the stretchy sort)200 jewelry crimp beads or tubesjewelry crimping tool100 lanyard hooks100 ornaments Note: In the photo above I show earring wire instead of ornament hooks. I changed that later as I found ornament hooks made it far easier to move ornaments around after they’d been hung. Also, my supplies are based on a 4 foot tall mobile using almost 100 ornaments, you’ll need to adjust amounts if you make one larger or smaller.

The Maxi Remember that one time I used to sew clothes? Well cross country traveling mixed with nausea every night really put a damper on my desire to sew. But I started getting the itch a few weeks ago with all of my gorgeous new fabric. So I decided to ease back into my sewing machine with a simple, fabulous especially if you're pregnant, maxi skirt. Growing Home: The Elastic-Waist Flirt Skirt (inspired by J.Crew) I am SO excited to be sharing this project with you. Not because it’s so crazy amazing (I’m a newbie sewer, so it’s actually rather basic), but because it is the very FIRST article of clothing that I’ve ever sewn for myself. Honestly, I never expected to make myself anything--I started sewing to make things for our home and the boys, and never expected to do much else.

David Harrison speaks about “When Languages Die” About 9 months ago, I shared some news of language extinction and the conservation efforts of K. David Harrison and David Anderson. My coverage was far from a thorough treatment of the subject, partially because I know little about the problem and the ways to remedy it. Ferdinand Foch At the outbreak of war in August 1914, Foch's XX Corps participated in the brief invasion of Germany before retiring in the face of a German counterattack and successfully blocking the Germans short of Nancy. Ordered west to the defence of Paris, Foch's prestige soared as a result of the victory at the Marne, for which he was widely credited as a chief actor while commanding the French Ninth Army. He was then promoted again to command Army Group North, in which role he was required to cooperate with the British forces at Ypres and the Somme. At the end of 1916, partly owing to the failure or stalemate of these offensives and partly owing to wartime political rivalries, Foch was removed from command. Recalled as Chief of the General Staff in 1917, Foch was ultimately appointed "Commander-in-Chief (Generalissimo) of the Allied Armies" in the spring of 1918. Early life[edit]