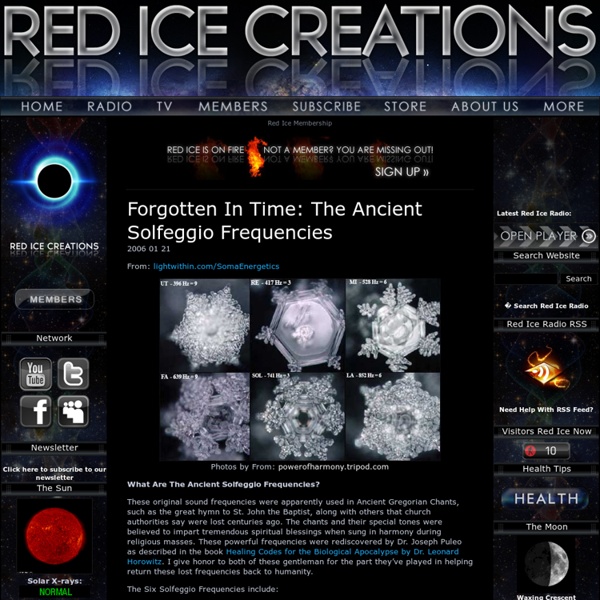 From: lightwithin.com/SomaEnergetics Photos by From: powerofharmony.tripod.com What Are The Ancient Solfeggio Frequencies? These original sound frequencies were apparently used in Ancient Gregorian Chants, such as the great hymn to St. The Six Solfeggio Frequencies include: UT – 396 Hz – Liberating Guilt and Fear RE – 417 Hz – Undoing Situations and Facilitating Change MI – 528 Hz – Transformation and Miracles (DNA Repair) FA – 639 Hz – Connecting/Relationships SOL – 741 Hz – Awakening Intuition LA – 852 Hz – Returning to Spiritual Order For example, the third note, frequency 528, relates to the note MI on the scale and derives from the phrase "MI-ra gestorum" in Latin meaning "miracle." A Little History At the turn of the century the awareness of DNA entered the collective consciousness of the world. Carl Sagan writes that most of our genetic information (about 97%) is unused DNA. The old paradigm and its premise stated that we began as biology in the womb of our mothers. Repairing DNA

Heads Up, Hoverboarders: Here Comes Quantum Levitation Few motifs of science fiction cinema have been more appealing to us than the subtle defiance of gravity offered by futuristic hovercraft. So every once in a while we check in to see how humanity is progressing on that front, and whether the promise of hoverboards will be delivered by 2015 as evidenced in Back to the Future Part 2. We’re not quite there yet, but we’re definitely getting off the ground, so to speak. Get ready to hover your brain around the art of quantum levitation. That’s right, quantum. Because of its chemical properties, a superconductor (when brought to low enough temperatures using, say, liquid nitrogen) exhibits this effect, causing the energy from the magnet below to warp around the superconductive object in a way which “locks” it in space. Even more impressive and ripe for practical transportation use: When the superconducting object is placed along a magnetic rail, it exhibits frictionless momentum. Connections:

Superhydrophobic spray means no more washing clothes – among others | ZME Science Ross Technology Corp, a company that focuses on steel products has created a new product based on the spray known as NeverWet – which aside from being useful, is also pretty cool. Now, this might not seem particularly interesting, but it has a myriad of applications; it is built from nanoparticles and it is hydrophobic – not only that it stops water from wetting it, but it shoots water right of from the surface on which it was applied. Even if at first they wanted to apply this technology to steel, they quickly realized the enormous list of applications this can have, from shoes and clothes that wouldn’t require washing any more, to your phone that could become waterproof, or just on stuff that you don’t want bacteria to get on. This spray will be released as a commercial product next year. Check out this video to see exactly how it works. Spray an even coating on leather or fabric. Several neutrla people have tested the technology and report great results.

Italian Mathematician (Maybe, but Probably Not Really) Explains Away Dark Matter With Math An interesting piece in Universe Today over the weekend takes the dark matter out of the hunt for dark matter, but you're probably going to want to approach this one carefully--or as Universe Today says, "put on your skeptical goggles and set them to maximum." An Italian mathematician has done some creative number crunching and accounted for the force that holds galaxies together without the need for dark matter. It's a bold claim to make--and one that's going to get a good going-over from physicists. A quick dark matter primer, for those who might be rusty: basically, if one is to simply tally up the amount of mass in spiral galaxies like our own and then model their rotation, we get a very different picture than the one we can empirically observe. So, by deductive reasoning, modern physics has concluded that the rest of the mass holding galaxies together is invisible--it's dark matter. But the thing is, his math fits the models almost perfectly. [Universe Today]