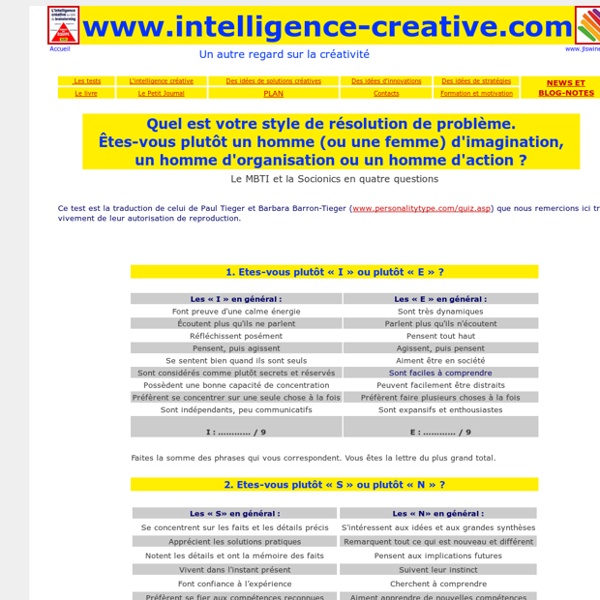 MBTI for Skeptics By Ryan Smith, Eva Gregersen, and Sigurd Arild A number of common critiques of Jungian typology and the MBTI are often voiced in no uncertain terms by people who have comparatively little knowledge about these fields. In this article we purport to answer the most common of these critiques. MBTI is pseudoscience and no better than astrology.There are personality tests that are more scientific than the MBTI.In terms of empirical evidence, types don’t exist. Human traits are distributed on a bell curve (normally), not as two camel humps (bimodally).People who take the MBTI multiple times often come out as different types (Low Test-Retest Reliability).MBTI descriptions contain vague and flattering statements that anyone would agree to (Forer Effect).Psychologists and academic researchers don’t take the MBTI seriously.Jung’s cognitive functions were good.

Portrait of an ISTP As an ISTP, your primary mode of living is focused internally, where you deal with things rationally and logically. Your secondary mode is external, where you take things in via your five senses in a literal, concrete fashion. ISTPs have a compelling drive to understand the way things work. They're good at logical analysis, and like to use it on practical concerns. They typically have strong powers of reasoning, although they're not interested in theories or concepts unless they can see a practical application. They like to take things apart and see the way they work.

Schadenfreude - Wikipedia Return to the Convent, by Eduardo Zamacois y Zabala, 1868. Note the group of monks laughing while the lone monk struggles with the donkey. Schadenfreude (/ˈʃɑːdənfrɔɪdᵊ/; German: [ˈʃaːdn̩ˌfʁɔʏ̯də]; lit. Myers-Briggs Type Indicator (MBTI) The Myers-Briggs Type Indicator or MBTI, was developed during World War II, by a young woman named Isabel Briggs Myers, and her mother, Katharine Briggs. Isabel decided to do her part for the war effort by creating a self-report inventory that would make Carl Jung's theory of psychological types available to more people. Her goals were two-fold; 1) Help people find a better fit for their work and make that work more effective and 2) Promote world peace by helping people develop more appreciation for individual differences and how to use the differences constructively rather than divisively. Today the MBTI is a well-known tool used for business effectiveness, communication, career development, cross-cultural understanding, education, and spirituality.

Get Motivated Fast – 3 Practical and Simple Ways Ever had days when you just can’t muster up the motivation to get started? It happens to the best of us. Even driven people have days when their energy seems to have gone missing-in-action. You spend your time telling yourself to get going, but it just doesn’t happen. And you’re not quite sure why. What if there was something specific and practical you could do that gets your motor running again?

6 Effective Ways to Become Persistent No great achievement is possible without persistent work. – Bertrand Russell A distinguishing attributes of those who succeed in life against those who don’t is persistence. Many has the capacity to set goals and plans toward success, yet only few succeeds, because only few stick to work on their goals and plans until it is accomplished. Majority stops before they even start or they quit in the middle of their journey.

Mike the Mentor - Coaching - MBTI and Coaching The Myers Briggs Type Inventory (MBTI) is widely used to give insight into how people structure their reality and make sense of the world. Some coaches also use it to determine the style of coaching most likely to be effective with particular individuals (see, for example, I'm Not Crazy, I'm Just Not You: Real Meaning of the 16 Personality Types for more on MBTI). But the MBTI also seems to tell us something about the type of people drawn to be coaches. Recently I have asked around 40 coaches what their MBTI preferences are. Strikingly, almost every single one has had an N preference on the S-N (Sensing-Intuition scale) - that is they have a preference for seeing the big picture and focusing on possibilities over seeing what is actually happening and focussing on practical realities.

10 Cures for TechnoStress — remodelista Older 10 Cures for TechnoStress by Julie Carlson Issue 57 · Haberdashery · January 29, 2013 Newer How to Beat Procrastination This is Part 2. You won’t get Part 2 if you haven’t read Part 1 yet. Here’s Part 1. PDF: We made a fancy PDF of this post for printing and offline viewing. Buy it here. (Or see a preview.)