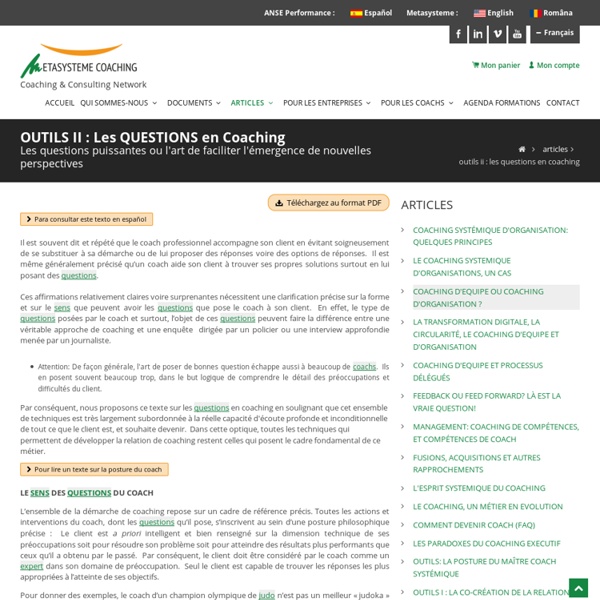 10 Questions that Will Change the Way You Think About Your Problems It’s not about having all the answers – it’s about asking the right questions. The saying “She who teaches others, teaches herself” is very true, not only because constant repetition helps impress facts indelibly on the mind, but also because the process of teaching itself gives greater insight into the subject taught. Selfishly, this is sometimes the reason Marc and I take on new coaching clients and write new personal development articles, even when our schedules are full. The strategies we teach help us grow too. One of the strategies we teach over and over again is self-inquiry – which is basically the art of asking ourselves the right questions. Truth be told, when times get tough and big problems arise, as they inevitably will, it is the strength of our character that sees us through. And since our character is directly influenced by what we say to (and ask of) ourselves on a daily basis, I want you to think about how you’ve been speaking to yourself lately. Afterthoughts Your turn…

The Value of Time: How Much is Your Time Really Worth? Not all uses of time are equal and this simple truth can make a big difference in life. People who spend their time doing more profitable work make more money. People who spend their time investing in others build better relationships. People who spend their time creating a flexible career enjoy more freedom. People who spend their time working on high-impact projects contribute more to society. Whether you want more wealth, more friendship, more freedom, or more impact, it all comes down to how you spend your time. If you’re like me, you probably want the things listed above (friendship, freedom, impact) and others too (health). This article explains how to figure out what your time is worth and use that information to spend your time more effectively. The Value of Time: What is One Hour Worth? A few weeks before I began writing this article, I was shopping for a small travel bag. I was immediately turned off by the idea of paying $45 to ship a $19 bag, so I searched for retail stores.

Stendhal on the Seven Stages of Romance and Why We Fall Out of Love: Timeless Wisdom from 1822 Love is perhaps the most fertile subject of literature, music, and all the arts. Kurt Vonnegut believed you’re only allowed to be in love three times in your life. It has been described as a matter of bravery, a limbic revision, the greatest insurance against regret. For Peanuts creator Charles Schulz, it is simply, sweetly walking hand in hand. But how, exactly, does love take hold of the heart? In 1822, French writer Marie-Henri Beyle, better-known by his pseudonym Stendhal, penned On Love (public library) — a timeless treatise attempting to rationally analyze the highest human emotion, rediscovered through a passing mention in the diaries of Susan Sontag (who famously and perhaps ironically wrote, “Nothing is mysterious, no human relation. Stendhal sets out to bridge “the deeply sensitive and coolly analytical,” beginning with a taxonomy of the four main types of love: There are four different kinds of love: 1. HERE is what happens in the soul: 1. The outline continues:

The Intelligence of Emotions: Philosopher Martha Nussbaum on How Storytelling Rewires Us and Why Befriending Our Neediness Is Essential for Healthy Relationships “The power of ‘the Eye of the Heart,’ which produces insight, is vastly superior to the power of thought, which produces opinions,” the great British economic theorist and philosopher E.F. Schumacher wrote in his 1973 meditation on how we know what we know. He was responding to the Persian poet and philosopher Rumi who, seven centuries earlier, extolled “the eye of the heart” as seventy-fold more seeing than the “sensible eyes” of the intellect. To the intellectually ambitious, this might sound like a squishy notion — or a line best left to The Little Prince. But as contemporary scientists continue to shed light on how our emotions affect our susceptibility to disease, it is becoming increasingly clear that our emotional lives are equipped with a special and non-negligible kind of bodily and cognitive intelligence. Nussbaum writes: A lot is at stake in the decision to view emotions in this way, as intelligent responses to the perception of value.

We’re Breaking Up: Rebecca Solnit on How Modern Noncommunication Is Changing Our Experience of Time, Solitude, and Communion Recently, while packing to move, I came upon a stack of letters from my Bulgarian grandmother. During my time in college, we wrote each other long, beautiful letters about once a month. Then she discovered the internet. The letters became emails and, invariably, their nature changed. As I ran my fingers over the lined paper, words subtly debossed by the pressure of my grandmother’s ballpoint pen, I wondered about the continuity of personal identity across this shift — my letter-writing self seemed to have entirely different things to say, and to say them entirely differently, than my email-writing self, and yet the two selves belong to the same person. With an eye to Virginia Woolf’s famous proclamation that “on or around December 1910, human character changed,” regarding the arrival of Modernism, Solnit writes: On or around June 1995, human character changed again. Those mail and newspaper deliveries punctuated the day like church bells.

Intuition of the Instant: French Philosopher Gaston Bachelard on Our Paradoxical Experience of Time “All eternity is in the moment,” Mary Oliver wrote. One of the greatest lines of poetry is also a sublime summation of one of the greatest debates in the history of science and philosophy: the nature of time. In 1932, exactly a decade after Albert Einstein and Henri Bergson’s famous confrontation on the matter, French philosopher Gaston Bachelard (June 27, 1884–October 19, 1962) addressed this question with uncommon acuity of insight in Intuition of the Instant (public library) — a timelessly rewarding exploration of “the problems of duration and the instant, of habit and life.” Puzzled by the paradox of how duration can be composed of instants that are by definition durationless, much as a line is composed of lengthless points, Bachelard begins by considering the nature of the instant and its role in the human experience: Bachelard turns to the essence of this wellspring of knowledge and intellectual courage, the instant, or what T.S. Life cannot be understood in passive contemplation.

Philosopher Erich Fromm on the Art of Loving and What Is Keeping Us from Mastering It “To love without knowing how to love wounds the person we love,” the great Zen teacher Thich Nhat Hahn admonished in his terrific treatise on how to love — a sentiment profoundly discomfiting in the context of our cultural mythology, which continually casts love as something that happens to us passively and by chance, something we fall into, something that strikes us arrow-like, rather than a skill attained through the same deliberate practice as any other pursuit of human excellence. Our failure to recognize this skillfulness aspect is perhaps the primary reason why love is so intertwined with frustration. That’s what the great German social psychologist, psychoanalyst, and philosopher Erich Fromm (March 23, 1900–March 18, 1980) examines in his 1956 masterwork The Art of Loving (public library) — a case for love as a skill to be honed the way artists apprentice themselves to the work on the way to mastery, demanding of its practitioner both knowledge and effort. Fromm writes:

A Unique Trust Placed in Chance and Eternity: How Real Love Begins and What Makes It Flourish Over Time “An honorable human relationship … in which two people have the right to use the word ‘love,’” Adrienne Rich memorably wrote, “is a process, delicate, violent, often terrifying to both persons involved, a process of refining the truths they can tell each other.” That transcendent turbulence of mutual truth-refinement is a centerpiece of the altogether fantastic In Praise of Love (public library) by French philosopher Alain Badiou (b. January 17, 1937) — an impassioned and immensely insightful defense of both love as a human faculty and love as a worthwhile philosophical pursuit. A century after Tolstoy wrote to Gandhi that “love is the only way to rescue humanity from all ills,” Badiou argues that love is the most potent antidote to the self-interest that dominates the modern world and our greatest hope for bridging the gaping divide between self and other: Love cannot be reduced to the first encounter, because it is a construction.