AI Repositories and Resource Lists. Artificial Intuition. Cooperation = Evolution. Role of Cooperation in the Evolution of the Brain The average human brain weighs about 2.8 pounds, has 100 billion neurons, and uses up 20% of the oxygen we breathe. 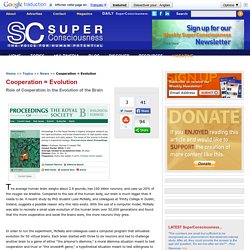 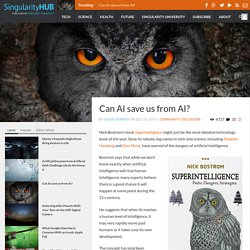 Nick Bostrom’s book Superintelligence might just be the most debated technology book of the year. Since its release, big names in tech and science, including Stephen Hawking and Elon Musk, have warned of the dangers of artificial intelligence. Bostrom says that while we don’t know exactly when artificial intelligence will rival human intelligence, many experts believe there is a good chance it will happen at some point during the 21st century. 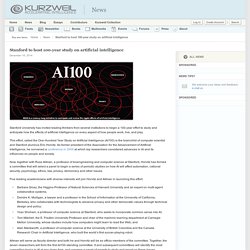 This effort, called the One Hundred Year Study on Artificial Intelligence (AI100) is the brainchild of computer scientist and Stanford alumnus Eric Horvitz. Is Stephen Hawking Right? Could AI Lead To The End Of Humankind? The famous theoretical physicist, Stephen Hawking, has revived the debate on whether our search for improved artificial intelligence will one day lead to thinking machines that will take over from us. 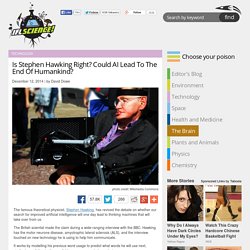 The British scientist made the claim during a wide-ranging interview with the BBC. Hawking has the motor neurone disease, amyotrophic lateral sclerosis (ALS), and the interview touched on new technology he is using to help him communicate. It works by modelling his previous word usage to predict what words he will use next, similar to predictive texting available on many smart phone devices. But Professor Hawking also mentioned his concern over the development of machines that might surpass us. “Once humans develop artificial intelligence, it would take off on its own and re-design itself at an ever increasing rate,” he reportedly told the BBC. Stephen Hawking warns artificial intelligence could end mankind. Prof Stephen Hawking, one of Britain's pre-eminent scientists, has said that efforts to create thinking machines pose a threat to our very existence. 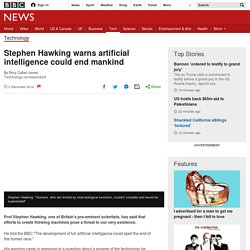 He told the BBC:"The development of full artificial intelligence could spell the end of the human race. " His warning came in response to a question about a revamp of the technology he uses to communicate, which involves a basic form of AI. But others are less gloomy about AI's prospects. The theoretical physicist, who has the motor neurone disease amyotrophic lateral sclerosis (ALS), is using a new system developed by Intel to speak. Machine learning experts from the British company Swiftkey were also involved in its creation. How the Cleverbot Computer Chats Like a Human. Last week, an artificial intelligence computer named Cleverbot stunned the world with a stellar performance on the Turing Test — an IQ test of sorts for "chatbots," or conversational robots. 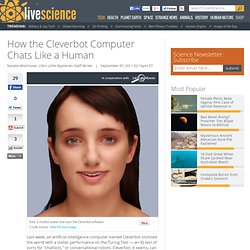 Cleverbot, it seems, can carry on a conversation as well as any human can. In the Turing Test — conceived by British computer scientist Alan Turing in the 1950s — chatbots engage in typed conversations with humans, and try to fool them into thinking they're humans, too. (As a control, some users unknowingly chat with humans pretending to be chatbots.) One Per Cent: Bot with boyish personality wins biggest Turing test.

Celeste Biever, deputy news editor Eugene Goostman, a chatbot with the personality of a 13-year-old boy, won the biggest Turing test ever staged, on 23 June, the 100th anniversary of the birth of Alan Turing. 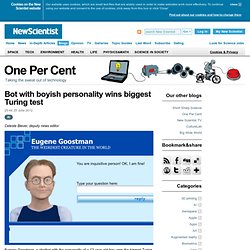 With the help of human instructors, a robot has learned to talk like a human infant, learning the names of simple shapes and colors. 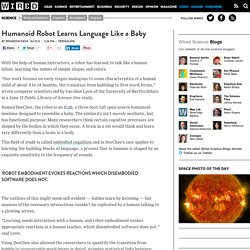 “Our work focuses on early stages analogous to some characteristics of a human child of about 6 to 14 months, the transition from babbling to first word forms,” wrote computer scientists led by Caroline Lyon of the University of Hertfordshire in a June 13 Public Library of Science One study. The Little Thoughts of Thinking Machines.

Next: About this document John McCarthy Computer Science Department Stanford University Stanford, CA 94305 jmc@cs.stanford.edu When we interact with computers and other machines, we often use language ordinarily used for talking about people. 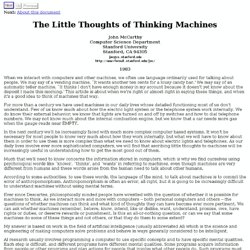 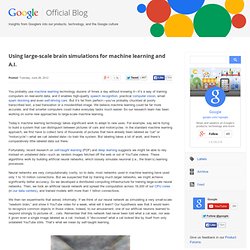 But it’s far from perfect—you’ve probably chuckled at poorly transcribed text, a bad translation or a misidentified image. We believe machine learning could be far more accurate, and that smarter computers could make everyday tasks much easier. So our research team has been working on some new approaches to large-scale machine learning. Today’s machine learning technology takes significant work to adapt to new uses. Google scientists find evidence of machine learning. Google scientists working in the company's secretive X Labs have made great strides in using computers to simulate the human brain. Best known for inventing self-driving cars and augmented-reality eyewear, the lab created a neural network for machine learning by connecting 16,000 computer processors and then unleashed it on the Internet. Along the way, the network taught itself to recognize cats.

While the act of finding cats on the Internet doesn't sound all that challenging, the network's performance exceeded researchers' expectations, doubling its accuracy rate in identifying objects from a list of 20,000 items, according to a New York Times report. Virtual robot links body to numbers just like humans - tech - 11 November 2011. Video: See a virtual robot mimic a human baby A virtual robot has acquired a cognitive wrinkle common in people – further evidence that computers need bodies if they're ever going to think like us. Developing artificial intelligence systems that can interpret images. Like many kids, Antonio Torralba began playing around with computers when he was 13 years old. Unlike many of his friends, though, he was not playing video games, but writing his own artificial intelligence (AI) programs.

Growing up on the island of Majorca, off the coast of Spain, Torralba spent his teenage years designing simple algorithms to recognize handwritten numbers, or to spot the verb and noun in a sentence. But he was perhaps most proud of a program that could show people how the night sky would look from a particular direction. “Or you could move to another planet, and it would tell you how the stars would look from there,” he says.

Today, Torralba is a tenured associate professor of electrical engineering and computer science at MIT, and an affiliate of the Computer Science and Artificial Intelligence Laboratory (CSAIL), where he develops AI systems that can interpret images to understand what scenes and objects they contain. A.I.