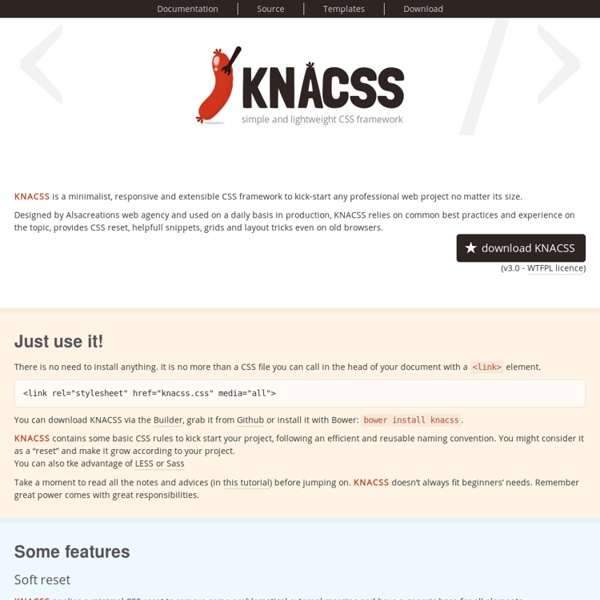 Soft reset KNACSS applies a minimal CSS reset to remove some problematical external margins and have a generic base for all elements. Box-Sizing One important part is that KNACSS use the usefull box-sizing: border-box model to ease our life when dealing with paddings and borders ; the exact size of all elements will now correspond to width property (and not width + padding + border anymore) : Typography For accessibility concerns, em is used as the main unit for major elements font sizes.

Customize checkboxes and radio buttons with iCheck (jQuery and Zepto) plugin - Iceweasel iCheck plugin works with checkboxes and radio buttons like a constructor. It wraps each input with a div, which may be customized by you or using one of the available skins. You may also place inside that div some HTML code or text using insert option. CSS Tools: Reset CSS The goal of a reset stylesheet is to reduce browser inconsistencies in things like default line heights, margins and font sizes of headings, and so on. The general reasoning behind this was discussed in a May 2007 post, if you're interested. Reset styles quite often appear in CSS frameworks, and the original "meyerweb reset" found its way into Blueprint, among others. The reset styles given here are intentionally very generic. There isn't any default color or background set for the body element, for example.

Discover What’s New in CSS 4 CSS 3 is still slowly making its way onto the web, but the World Wide Web Consortium (W3C), the governing body that oversees the development of web standards, is already plotting the future of CSS with CSS 4. The W3C recently released the first draft of CSS 4, adding dozens of new rules to make web developers’ lives easier. The CSS 4 spec is brand new and no web browser actually supports any of these rules yet, but if you’re curious what the next few years will mean for CSS, the first draft offers a sneak peek at what’s in store for web developers. The biggest news in the current draft of CSS 4 is support for the much-requested parent or “subject” selector. In CSS, rules are typically applied to the innermost selected element. That is, given the chain body header h1, the actual CSS rule will be applied to the h1 element at the end of the chain.

20+ Beautiful Resources That Complement Twitter Bootstrap Twitter Bootstrap is a beautiful "web design kit" for creating cross browser, consistent and good looking interfaces. With a flexible and well-thought HTML/CSS/Javascript structure, it offers many of the popular UI components, a grid system and JavaScript plugins for common scenarios. And, it seems to be rocking the web design community as there are lots of websites already built and being built with it (it is also the most watched/forked repository in GitHub). Twitter Bootstrap is already powerful enough to empower any web interface. In order to make more use of it and/or ease the development process, there are various tools/resources that complement it.

Select2 3.3.2 - Iceweasel Gets or sets the selection. If the value parameter is not specified, the id attribute of the currently selected element is returned. If the value parameter is specified it will become the current selection. val method invoked on a single-select with an unset value will return "", while a val method invoked on an empty multi-select will return [].

50+ Useful CSS3 Tutorials to Enhance Your Skills People in the web design community now has been talking about the wonders brought about by CSS3. Obviously, it is does not only control the styling of the web page as what CSS2 does, but also the behavioral attributes of the design. This novel technology certainly makes it convenient for you to add animations and transitions right on your stylesheet. Although it is hoped to be the technology that can perform a multi-faceted role in web designing, CSS3 unfortunately is not yet a w3C standard. While it is easier and more powerful than the previous versions, not all of its functions however have the support of major browsers unlike Javascript libraries.

CSS Length Explained When styling a web site with CSS you might have realised that an inch on a screen is not an actual inch, and a pixel is not necessarily an actual pixel. Have you ever figured out how to represent the speed of light in CSS pixels? In this post, we will explore the definition of CSS length units starting by understanding some of the physical units with the same name, in the style of C.G.P. Grey. The industrial inch (in) Creating Different CSS3 Box Shadows Effects - Iceweasel In this tutorial we are going to be creating box shadow effects with just CSS. Below is an image created in photoshop of different box shadows effects. These used to be the only way of creating this effect but thanks to CSS3 we can now do all this with just CSS. View Demo page to see what we are going to create CSS Box Shadow Effects Demo CSS Box Shadow We are going to be using the CSS box shadow property which is one my favourite CSS properties which you will see in this tutorial how easy you can use it.

CSS Refreshers: Borders Sure, we’re all familiar with borders. Is there anything new that could possibly be introduced? Well, I bet there’s quite a few things in this article that you never knew about! Not only can CSS3 be used to create rounded corners, but plain-ole' CSS can also be wrestled into displaying custom shapes. An Introduction To Object Oriented CSS (OOCSS) - Smashing Coding Advertisement Have you ever heard the phrase “Content is King”? Being a Web developer, and therefore having a job that’s often linked to content creation, it’s likely you have.

Flippant Heading Donec id elit non mi porta gravida at eget metus. Fusce dapibus, tellus ac cursus commodo, tortor mauris condimentum nibh, ut fermentum massa justo sit amet risus. Etiam porta sem malesuada magna mollis euismod. The No-Pressure Introduction to CSS3 It's difficult to escape the hype surrounding CSS3 at the moment, yet it has created a divide in the community. If you read any blog post on the subject and it is flooded with comments by developers who feel they still cannot use CSS3 in their work. Rather than being encouraging the responses from the experts in our community can appear as aggressive and superior. Although they are correct in saying CSS3 can be used now, the decision must still fall to the individual, even if their opinions are based on inaccurate assumptions. In this article I'll try to cover some of the more widely adopted CSS3 advancements, showing you not only how to use them but also the support you will likely expect from the major browsers. Why We Can Use CSS3 Now