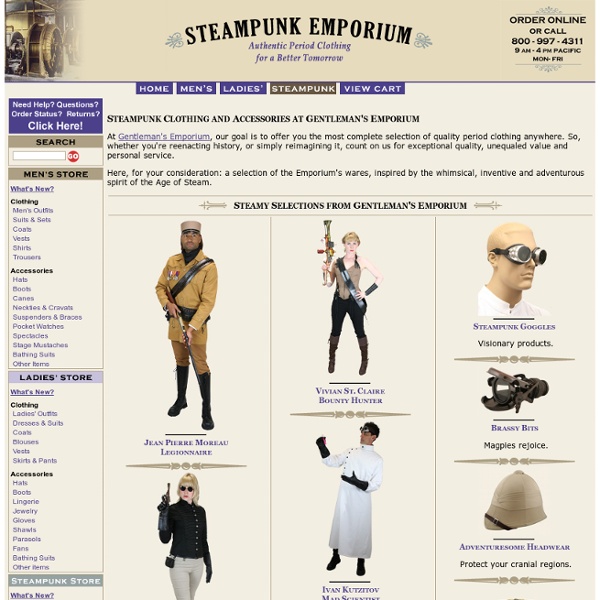 ¡The AntiCraft! Christopher Lansdown (photo) Beth Skwareck (model) click image to enlarge A Petticoat for the Ages Although you can make this petticoat as a skirt to wear to work or school, its main utility is in its usefulness for the time-traveler. Say your future self invents a time machine, and comes back to offer you a ride in it, say next week.

A Compilation of Vintage Textures for Designers Resources June 10, 2010 Textures are one of the most used resources in making great designs. They can accentuate your images to better portray the feel of the design you’re aiming for. Vintage textures, for instance, can add a classic or nostalgic touch to your work. Here at You the Designer, you need not blast to the past to get this brilliant effect. Lantern Clock Hello All here is my first Instructable, It’s a beautiful Nixie Lantern clock, A little steam punk and a bit Victorian, made up of mostly of found components I tend to communicate better when there is something to show so please look at the images and tags, they sometimes will hold more info than the body of text. Here is a parts list.... -large slab of walnut 2" thick by 36" long and 12" wide -large slab of maple 1.5" thick by 30" long and 12" wide, both found on eBay -2" diameter clear acrylic tubing .125" wall about 12" long, any plastic store and eBay.

15 and a Thrift Store With the season of "legitimate" public costuming quickly approaching I have been itching to get to work on my steampunk clothing. Yes- literally itching. It's that feeling on your hands after sorting through racks of junk of countless concourses of other human beings at the thrift store. And you have to use three baby wipes when you get back in the car to wash up before you start to feel even a little bit normal. I have found some real winners though, and I now have a great stash of materials to work with. 47 Sites Every Recording Musician Should Visit In a recent “Open Mic” we asked you, “Which music-related sites do you visit regularly?” This article is a summary of the great suggestions given in the comments to that article. You can make the list even longer by commenting on this article. As you’re reading this article, Audiotuts+ needs no introduction. Several commenters mentioned Audiotuts+ - thanks for the support!

Infant dies after being raped; mother encouraged the attack and watched - Detroit Crime A mother is under arrest after allegedly allowing her boyfriend to rape her infant child, causing the child to die. Jessica Lynn Howell, 25, of St. Charles County, Missouri, was arrested in connection with the death of her four-month-old daughter, Ashlynn Lilith Peters. Ashlynn died December 3, 2012. Originally Howell was not charged as she claimed innocence in the attack, but prosecutors say text messages between Howell and her boyfriend Jordan Lafayette Prince are conclusive and damning. Desktop Terrarium with Night Light Almost every Steampunker has the same problem, to finance all the big projects in your head you must sit many hours on your desk to earn the money. Often the office is dismal and grey. This is quietly no place for an awesome mind.

Bicycle Clothing "FASHION, as applied to the garb of the wheel-woman, offers but few radical changes for the spring season [1899]. Cycling clothing has passed the experimental stage and has now reached a point where improvement becomes difficult; for the perfect wheeling costume, if not already an accomplished fact, is as near perfection as most people ever expect to see it. The up-to-date suit, indeed, not-withstanding its simple exterior, represents more ingenuity and artistic skill than is exhibited in the most elaborate evening gown. Gathered from an infinite number of sources, every device that the fertile brain of the costumer can produce is applied to its practical advantage or made to contribute to its artistic improvement." "Materials for the development of cycling clothing remain practically the same as those in vogue last season, though combinations and trimmings are somewhat more affected than formerly. "Two practical and popular skirt models are shown in Figs.

Magic circle Common terms and practices[edit] A solomonic magic circle with a triangle of conjuration in the east. This would be drawn on the ground, and the operator would stand within the protection of the circle while a spirit was conjured into the triangle.[citation needed] Traditionally, circles were believed by ritual magicians to form a protective barrier between themselves and what they summoned.[1] In modern times, practitioners generally cast magic circles to contain and concentrate the energy they believe to raise during a ritual.[citation needed]

Senior dog stolen during Texas home invasion - National Dogs Last Friday, a senior dog disappeared during a home invasion in north Austin, Texas. According to the dog's owner, Stephanie, their 13-year-old bull terrier, "Rica," has been missing ever since someone broke into their home which is located in the Georgian Acres neighborhood in Austin. Rica weighs approximately 50 pounds and requires medication for seizures; she eats a special food. According to Stephanie, there was a possible sighting of Rica on Tuesday morning near Watson and Anderson and also, on Saturday, at Justin and Woodrow. Steampunk 101 by G. D. Falksen What is... What is steampunk? In three short words, steampunk is Victorian science fiction. Here “Victorian” is not meant to indicate a specific culture, but rather references a time period and an aesthetic: the industrialized 19th century. Historically, this period saw the development of many key aspects of the modern world (mechanized manufacturing, extensive urbanization, telecommunications, office life and mass-transit), and steampunk uses this existing technology and structure to imagine an even more advanced 19th century, often complete with Victorian-inspired wonders like steam-powered aircraft and mechanical computers. Where did steampunk come from? In some sense, steampunk has existed since the 19th century.

Switching Gears - Steampunk Art And it all began because of a Sickle Sharpener. When I heard we had been given a Sickle Sharpener, lets say I was less than thrilled. As soon as we took possession of said Sickle Sharpener, my husband found inspiration in the gears, which looked something like this... Then, told me that he was going to be turning them in pieces of Steampunk Art. Can you guess the look I gave him, a cross between 'are you crazy' and 'do you actually expect me to put those things in my our house'. When my husband came home with the most recent Restoration Hardware catalog and there {in this catalog from a home decor store I admire}...gears ranging in price from $80 to almost $200.