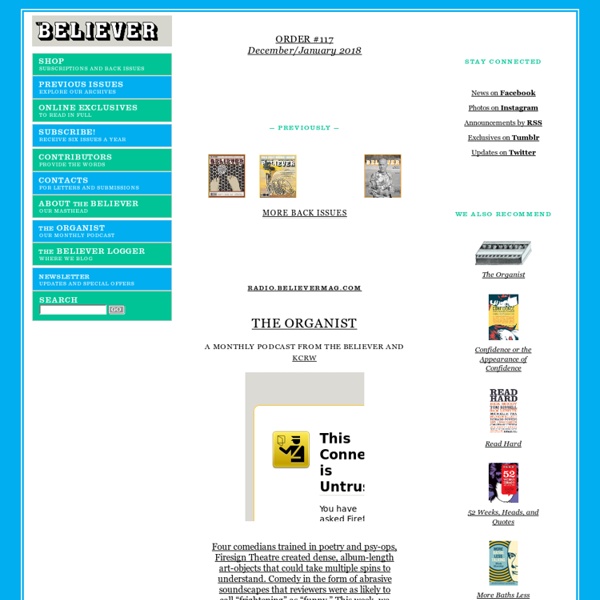 Issue 29 — The Magazine Monkeybicycle: Literary Goodness SUBNORMALITY! All content copyright Winston Rowntree, 2015. Museum previously seen here and then here. The Los Angeles Review of Books Current Issue | Magazine Dana Spiotta and Rachel Kushner mine our artistic and political history in a way that few contemporary novelists do. They are the descendents of DeLillo and Didion, but each has struck out on her own to stake claim on new fictional ground. Both writers’ work is characterized by their sharpness of language and their precise emotional registers, as well as their ambitious, politically charged themes. Last fall, Kushner ventured east from her Los Angeles home and taught a seminar on Proust at Syracuse University, where Spiotta is on the faculty. —Rob Spillman Dana Spiotta: Can you describe your writing process? Rachel Kushner: Because I’ve written only two novels, I don’t quite feel there is a system. With The Flamethrowers, I was thinking about New York City in the 1970s, the kind of classic image of the looters in the Bronx during the blackout of July 1977. In short, I think, daydream, take notes, and, finally, try to find the tone. DS: Can you tell me about your early writing?

The Front Row April 18, 2014 The Secrets of Godzilla My artistic career was ended by Godzilla—as a child monster-movie maniac, I stopped attending painting classes when the long-awaited film (the American version, of course, starring Raymond Burr) showed up on Saturday-morning television. So I take the weeklong run of the Burr-free 1954 Japanese-language original, which begins today at Film Forum, personally. The first surprise is that the original version, directed by Ishiro Honda, is not a kids’ movie, not a hectic teen goof, not a grindhouse shocker but a serious drama of politics, romance, and conscience (both civic and intimate). April 17, 2014 A Documentary Set Entirely Within the Capsule of a Cable Car The filmmakers follow the narrow limits of a self-imposed rule, and their obstinacy courts cinematic disaster. April 15, 2014 DVD of the Week: “Kiss Me Deadly” April 14, 2014 The Best Documentaries of All Time What’s the sound of two second shoes dropping? April 11, 2014 April 10, 2014 April 9, 2014