The transition period from 1979 to 1986. The corporate has been bought by Ian Chase and a group of South African investors. The post-transition period from 1986 up to the present. The entries below are displayed in chronological order. ▲ (Left side) Sasieni (Fish-tail script) London Made, PAT. (Right side) ▲ Pre-transition period, 1919 - 1924. . ▲ (Left side) Sasieni (Fish-tail script), London Made, PAT. In the context of the Sasieni/Dunhill trial and according to Stephan Smith: "In an initial attempt to comply with US patent law, Sasieni moved the one blue dot to the side of the pipe. (Arched) Specially Selected, by, Sasieni (Fish-tail script) London Made (Arched) Made in England, 155 XL Pre-transition period, 1919 - 1924. The very rare Sasieni "Blue Bar" logo pipe is difficult to date. Pre-transition, 1946 - 1979. Fumeurs de Pipe - Things are moving in the East ! by Erwin Van Hove. A decade ago, even the most knowledgeable pipe connoisseurs were not capable of quoting the name of a single Russian or Ukrainian pipe maker. 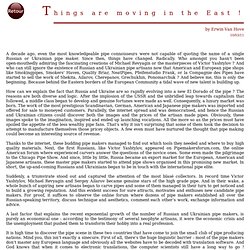 Since then, things have changed. Radically. Cobfoolery. John Seiler's Personal Site. I am am engineer by training with an advanced degree in industrial hygiene. 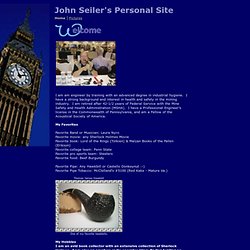 I have a strong background and interest in health and safety in the mining industry. I am retired after 42-1/2 years of Federal Service with the Mine Safety and Health Administration (MSHA). I have a Professional Engineer's license in the Commonwealth of Pennsylvania, and am a Fellow of the Acoustical Society of America. My Favorites Favorite Band or Musician: Laura NyroFavorite movie: any Sherlock Holmes MovieFavorite book: Lord of the Rings (Tolkien) & Malzan Books of the Fallen (Erikson) Favorite college team: Penn StateFavorite pro sports team: SteelersFavorite food: Beef Burgundy Favorite Pipe: Any Hawkbill or Castello Donkeynut :-) Favorite Pipe Tobacco: McClelland's #5100 (Red Kake - Mature Va.)

My Hobbies I am an avid book collector with an extensive collection of Sherlock Holmes. The Tobacco Pipe Artistory. SmokingPipesPlanet - Smoking Pipes. Tobacco Cut Guide - The Pipe Guys. The Briar & Leaf Chronicles. Farewell, Old Friend 4th September, 2012: Posted by glpease in Editorial It is with deep sorrow that I share some sad news. Craig Tarler, beloved friend and colleague, passed from this earth today at the age of 82. I’ve spent much of the day in contemplation, trying to figure out how to process this, and much of the evening drinking in a feeble attempt to dull the sharp edge of loss. None of it has worked, and I’m having a hard time finding words. Our relationship over the past 14 years has been more than just business, and more than just friendship.

Time will soothe the sting, and business will continue under the guidance of Craig and Patty’s son Chris, but I will always miss those morning phone calls. Requiescat in pace, old friend. Out, Damned Spot! 14th March, 2012: Posted by glpease in Pipes , Technique I originally wrote this article for the now long out of print Pipe Friendly Magazine, where it appeared in Vol. 5 No. 4 (1999). Limited Disappointment. Talking Tobacco. Tobacco – A Rough Guide. I have found this information in various places on the internet. 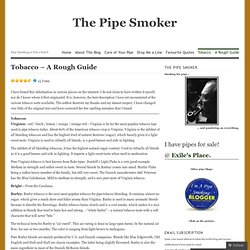 I do not claim to have written it myself, nor do I know where it first originated. It is, however, the best description I have yet encountered of the various tobacco sorts available. The author deserves my thanks and my utmost respect. I have changed very little of the original text and have corrected the few spelling mistakes that I found. Virginia: -red / black / lemon / orange / orange-red – Virginia is by far the most popular tobacco type used in pipe tobacco today. The mildest of all blending tobaccos, it has the highest natural sugar content. Pure Virginia tobacco is best known from flake types. Bright – From the Carolinas. Passion for Pipes. Why do we dedicate pipes? 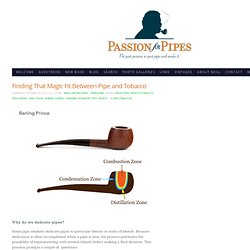 Some pipe smokers dedicate pipes to particular blends or styles of blends. Because dedication is often accomplished when a pipe is new, the process precludes the possibility of experimenting with several blends before making a final decision. This practice prompts a couple of questions: Why dedicate pipes to specific tobaccos? Without having experienced different blends in a pipe, how do we pre-judge which pipes are best suited for particular tobaccos. I dedicate pipes to tobaccos for several reasons. Secondly, because I smoke a range and variety of tobaccos that are incompatible with others, I want to avoid obscuring the taste of a particular favorite blend with some other tobacco, especially if that favored blend possesses singular flavors that are amenable to lingering within the pipe. Some tobaccos ghosts are both more obnoxious and more stubborn than their gentler counterparts. What assumptions and experience guide our dedication decisions?