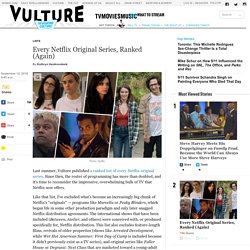 Since then, the roster of programming has more than doubled, and it's time to reconsider the impressive, overwhelming bulk of TV that Netflix now offers. Like that list, I've excluded what's become an increasingly big chunk of Netflix's "originals" — programs like Marcella or Peaky Blinders, which began life in some other production paradigm and only later snagged Netflix distribution agreements.

The international shows that have been included (Between, Atelier, and others) were conceived with, or produced specifically for, Netflix distribution. This list also excludes feature-length films, revivals of older properties (shows like Arrested Development, while Wet Hot American Summer: First Day of Camp is included because it didn't previously exist as a TV series), and original series like Fuller House or Degrassi: Next Class that are marketed toward a young-adult audience. 36. 35. 34. 33. 32. 31. 30. 29. 28. 50 Best TV Shows on Hulu Right Now. Image credit: NBC 1. 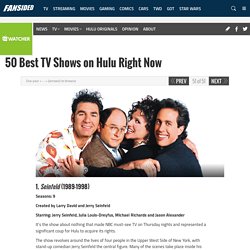 Seinfeld (1989-1998) Seasons: 9 Created by Larry David and Jerry Seinfeld Starring: Jerry Seinfeld, Julia Louis-Dreyfus, Michael Richards and Jason Alexander It’s the show about nothing that made NBC must-see TV on Thursday nights and represented a significant coup for Hulu to acquire its rights. The show revolves around the lives of four people in the Upper West Side of New York, with stand-up comedian Jerry Seinfeld the central figure. The show doesn’t have a specific theme or element, which is why it’s about nothing, but it’s just about life and the little superficial things that help Seinfeld get material for his comedy, and the mundane things that seem small in our lives result in the biggest laughs when they play out on the small screen.

List of the Best Murder Mystery Movies - a list by listfreak. The Best TV Shows on Hulu (Updated Feb. 2016) Scream Queens A house full of sorority girls wracked with fear after a string of campus murders might sounds like the most trope-filled and cliche plot ever conceived, but Scream Queens is well aware of this. 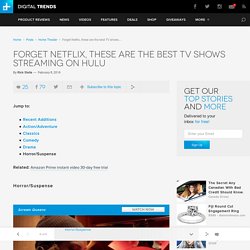 The Kappa House, lead by Chanel Oberlin (Emma Roberts), is the most sought-after sorority on campus at Wallace University. However, soon the Dean Cathy Munsch (Jamie Lee Curtis) forces the girls to loosen their restrictive initiation requirements. Fingers start flying when students start dropping dead, though, and the ensuing mystery meshes black humor with classic horror to great effect. Fear the Walking Dead The Walking Dead comic and TV series creator, Robert Kirkman, teamed up with producer Dave Erickson to co-create this spin-off series. X-Files Chris Carter’s science fiction drama, The X-Files, operated under one simple premise: The truth is out there. The Strain. Top Movies - Netflix, Amazon, iTunes, DVD. How to Find Top Rated Netflix Movies and TV Shows to Stream. 10 Independent Films You Must See - Fame10. In the realm of cinema, there are a host of films that people put on a “must see” bucket list of sorts, but oftentimes, the indie darlings get lost in the shuffle because their budget was small, and their marketing budget was even smaller. 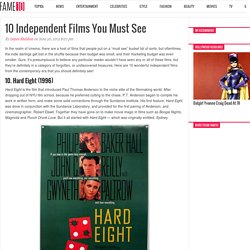 Sure, it’s presumptuous to believe any particular reader wouldn’t have seen any or all of these films, but they’re definitely in a category of forgotten, or undiscovered treasures. Here are 10 wonderful independent films from the contemporary era that you should definitely see! 10. Hard Eight (1996) Hard Eight is the film that introduced Paul Thomas Anderson to the niche elite of the filmmaking world.

A way to find Netflix gems. Best Netflix Movies, Series Found With These 5 Apps. Netflix giveth, and Netflix taketh away. 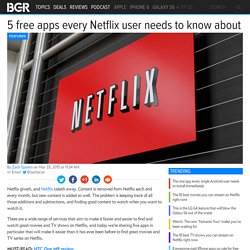 Content is removed from Netflix each and every month, but new content is added as well. The problem is keeping track of all those additions and subtractions, and finding good content to watch when you want to watch it. There are a wide range of services that aim to make it faster and easier to find and watch good movies and TV shows on Netflix, and today we’re sharing five apps in particular that will make it easier than it has ever been before to find great movies and TV series on Netflix. 23 Best Movies On Netflix You Haven’t Yet Seen - A Good Movie to Watch. Having only made its way to the U.S. 6 long years after its initial release, this is the long-awaited film from the Oscar-winning director of A Separation– and it is in every way extraordinary. 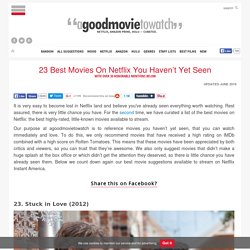 It’s a movie stripped down of almost everything to keep only its humans in focus, it is honest and realistic beyond belief and quite simply a must-watch. A group of old friends and relatives reunite for vacation in northern Iran with one of them bringing a new person to the group, Elly, in hopes of her marrying one of the friends, Ahmad. Best Mystery/Thriller/Crime TV Series - a list by nikunjtanna-116. Into Great Silence Documentary. In this contemplative documentary from filmmaker Philip Gröning, the Grande Chartreuse monastery opens its doors to the public for the first time since being founded by St. 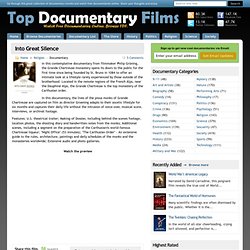 Bruno in 1084 to offer an intimate look at a lifestyle rarely experienced by those outside of the brotherhood. Located in the remote regions of the French Alps, near the Dauphiné Alps, the Grande Chartreuse is the top monastery of the Carthusian order. In this documentary, the lives of the pious monks of Grande Chartreuse are captured on film as director Groening adapts to their ascetic lifestyle for six months and captures their daily life without the intrusion of voice-over, musical score, interviews, or archival footage. Watch the preview. Uncle Orson's All-time Film List. Uncle Orson's List of the Best Films Ever Made To make this list, a film had to move me deeply or entertain me greatly on first viewing, and continue to move me and entertain me upon repeat viewings in later years. 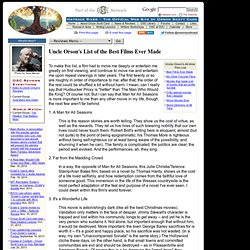 The first twenty or so are roughly in order of importance to me; after that, the order of the rest could be shuffled a bit without harm. I mean, can I really say that Hudsucker Proxy is "better" than The Man Who Would Be King? Of course not. But I can say that Man for All Seasons is more important to me than any other movie in my life, though the next few aren't far behind.

Reel Times Reflections on Cinema The Best Films of 2010. 1. 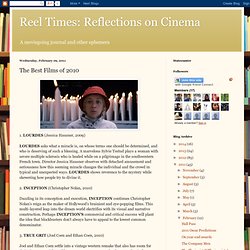 LOURDES (Jessica Hausner, 2009) LOURDES asks what a miracle is, on whose terms one should be determined, and who is deserving of such a blessing. Samsara (2001) - IMDb. UP, Michigan! (2001) - IMDb. RENT SOUNDTRACK. Tibet A Buddhist Trilogy Watch Free Documentary Online. IMDb Top 250 - IMDb.