The Best Faith Film You’ll See All Year. Amidst all the hype and debate surrounding this year’s flood of faith-related films--Noah, God is Not Dead, and Heaven is For Real--a quiet Oscar winner from 2013, recently released to DVD, provides the most compelling story of faith I’ve seen on the big screen in years. 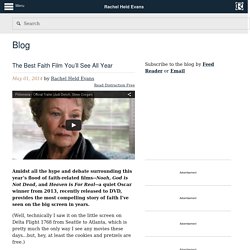 (Well, technically I saw it on the little screen on Delta Flight 1768 from Seattle to Atlanta, which is pretty much the only way I see any movies these days…but, hey, at least the cookies and pretzels are free.) Philomena traces the heart-wrenching journey of a devout Irish woman (played by the incomparable Judi Dench) who sets out to find her long lost son, whom she was forced to give up for adoption as a teenager by nuns who kept her like a prisoner in a convent full of other unwed mothers in the 1950s. The film is based on a true story as detailed in Sixsmith’s book, The Lost Child of Philomena Lee, and is at once laugh-out-loud funny and excruciatingly sad.

(The downside to watching a great movie on a plane? Spokane, WA & Coeur dAlene, ID. 7 Amazing Lessons Grey's Anatomy Has Taught Me ... → Movies. All The Ways 'Grey's Anatomy' Season 11 Is Just Like Season 1, Because The Show Has Totally Come Full Circle. When a television show manages to make it past its first year, that’s impressive. 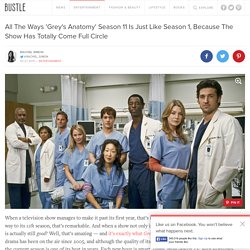 When a show makes it all the way to its 11th season, that’s remarkable. And when a show not only is still churning out episodes 11 years in, but is actually still good? Well, that’s amazing — and it’s exactly what Grey’s Anatomy is all about right now. The ABC drama has been on the air since 2005, and although the quality of its episodes have varied (ghost sex, anyone?) , the current season is one of its best in years. So how, exactly, is Grey’s still so strong, so many seasons in? Meredith and Derek’s Relationship Is Unclear 2005: Everything was going well (well, except for the fact that Derek was her boss) until his wife showed up in the season finale, making things a little complicated. 2015: After a lot of fighting, Derek moved to D.C. for a job, and he and Mer have been struggling ever since. The Gang Is Forming The Chief Is A Father Figure Everyone Crashes At Each Other’s Houses Everyone Wants To Be Chief. Captive (2015)

The Pixar Theory. Every Pixar movie is connected. 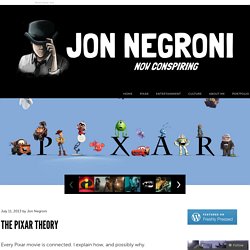 [SIDE NOTE: All text in blue indicates updated edits since the original version] You can read the full theory below, or watch this summarized video that was made and narrated by Bloop Media. Or does he? Mr. Les anges du bonheur (TV Series 1994–2003) Grey's Anatomy (TV Series 2005– ) Homeland (TV Series 2011– ) Gregory House and Sherlock Holmes connections - House Wiki. 'How often have I said to you that when you have eliminated the impossible, whatever remains, however improbable, must be the truth? 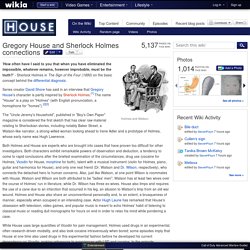 ' - Sherlock Holmes in The Sign of the Four (1890) on the basic concept behind the differential diagnosis. Series creator David Shore has said in an interview that Gregory House's character is partly inspired by Sherlock Holmes.[1] The name "House" is a play on "Holmes" (with English pronunciation, a homophone for "homes").[2][3] The "Uncle Jeremy's Household", published in "Boy's Own Paper" magazine is considered the first sketch that has clear raw material relating to Sherlockian stories, including notably Baker Street, a Watson-like narrator, a strong-willed woman looking ahead to Irene Adler and a prototype of Holmes, whose early name was Hugh Lawrence.

Both Holmes and House are experts who are brought into cases that have proven too difficult for other investigators. In chapter 7x13, "Two Stories", we get to see Dr. Elementary Edit References.