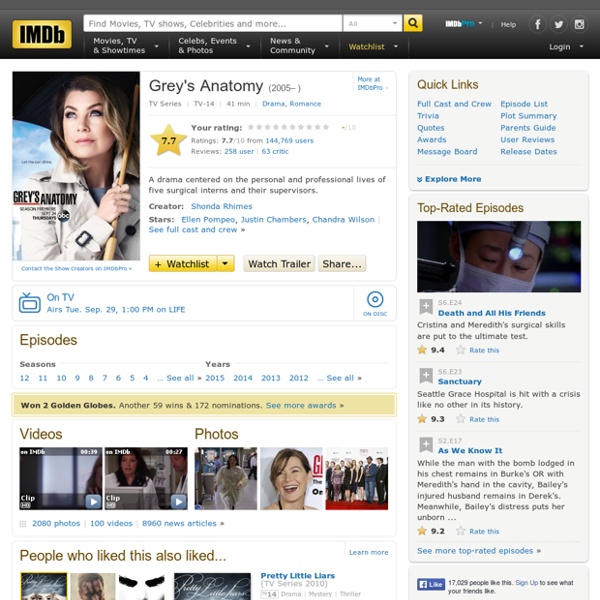 Edit Storyline Grey's Anatomy is a medical drama set at the fictional Grey Sloan Memorial Hospital in Seattle. The series covers the stories of the interns and residents at the hospital as they try to balance their personal lives with the demands of their medical training. The main character is Meredith Grey, who is married to a neurosurgeon at the hospital .The show follows her life as a third year resident at the hospital in the surgical department run by Dr Richard Webber. It covers not only her relationship with her husband, but also with her best friend Cristina Yang and her interactions with the other doctors and staff. Plot Summary | Add Synopsis Taglines: Life changes in a heartbeat. Edit Did You Know? Trivia As is common for major TV and film productions, stars of the show have become famous in roles other than those they originally sought. Goofs Throughout the series, the Chief of Surgery is shown as running the hospital and surgeons are depicted as making diagnoses. Quotes Dr.

The Pixar Theory Every Pixar movie is connected. I explain how, and possibly why. Several months ago, I watched a fun-filled video on Cracked.com that introduced the idea (at least to me) that all of the Pixar movies actually exist within the same universe. Heroes (TV Series 2006–2010 Grey's Anatomy Life Lessons I had this badass professor in med school. She seemed invincible. Then, one day, she needed her gallbladder out and the surgery killed her. Her platelets stopped clotting. She bled out on the table. Everything that could have gone wrong, did go wrong. Friends "With a Little Help From My Friends" is a song written by the Beatles (and expertly covered by Joe Cocker) and it could easily be the subtitle for the thirty minute comedy, "Friends". In 1994, the idea was created for "Friends": a show about six friends in New York as they navigate their way through life and learn to grow up as they approach the third decade of their life. All, with the help from each other to get them through the obstacles that life naturally has for us. Monica is the excessively neat and organized "older sister" of the group, who works as a chef while yearning to find her ideal love.

Gregory House and Sherlock Holmes connections - House Wiki 'How often have I said to you that when you have eliminated the impossible, whatever remains, however improbable, must be the truth?' - Sherlock Holmes in The Sign of the Four (1890) on the basic concept behind the differential diagnosis. Series creator David Shore has said in an interview that Gregory House's character is partly inspired by Sherlock Holmes.[1] The name "House" is a play on "Holmes" (with English pronunciation, a homophone for "homes").[2][3] Grey's Anatomy Grey's Anatomy is the highest-rated drama in the key 18–49 demographic. While the ratings have fallen over the past few seasons, it was once among the overall top-ten rated shows in the United States. Grey's Anatomy has been well received by critics. Considered an impact on culture, the series has received numerous awards, and has also been included in various critics' top ten lists. It is the recipient of the 2007 Golden Globe Award for Best Television Series - Drama, and multiple Emmy nominations, including two for Outstanding Drama Series. The show has produced several specials, as well as distributed all seasons to DVD, and released a collection of merchandise.

All The Ways 'Grey's Anatomy' Season 11 Is Just Like Season 1, Because The Show Has Totally Come Full Circle When a television show manages to make it past its first year, that’s impressive. When a show makes it all the way to its 11th season, that’s remarkable. And when a show not only is still churning out episodes 11 years in, but is actually still good? Well, that’s amazing — and it’s exactly what Grey’s Anatomy is all about right now. The ABC drama has been on the air since 2005, and although the quality of its episodes have varied (ghost sex, anyone?), the current season is one of its best in years. The Best Faith Film You’ll See All Year Amidst all the hype and debate surrounding this year’s flood of faith-related films--Noah, God is Not Dead, and Heaven is For Real--a quiet Oscar winner from 2013, recently released to DVD, provides the most compelling story of faith I’ve seen on the big screen in years. (Well, technically I saw it on the little screen on Delta Flight 1768 from Seattle to Atlanta, which is pretty much the only way I see any movies these days…but, hey, at least the cookies and pretzels are free.) Philomena traces the heart-wrenching journey of a devout Irish woman (played by the incomparable Judi Dench) who sets out to find her long lost son, whom she was forced to give up for adoption as a teenager by nuns who kept her like a prisoner in a convent full of other unwed mothers in the 1950s. The film is based on a true story as detailed in Sixsmith’s book, The Lost Child of Philomena Lee, and is at once laugh-out-loud funny and excruciatingly sad. (The downside to watching a great movie on a plane?