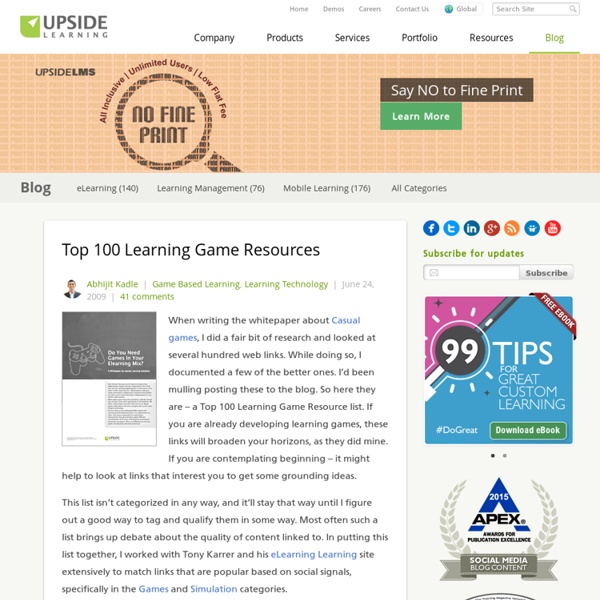 Seven Top Authoring Tools by Joe Ganci “You choose the tools you need depending on the instructional design you need to implement, the venues to which you need to deliver, your budget and schedule, and other factors. I hope this table helps you to reach your eLearning goals.” Recently The eLearning Guild published a research report written by yours truly, entitled Rapid eLearning Authoring: Top Tools, in which I analyzed the results of the continuous surveys to which thousands of Guild members respond. MicroWorlds EX We think our products are great! But don't just take our word for it, here's what teachers have to say... "I was first introduced to Logo about 20 years ago at the University of Nebraska. About 10 years ago when the opportunity came up to teach a 6-week exploratory class for seventh graders, I knew right away that I wanted to use MicroWorlds!

Game Theory, Popular Science On test day for my Behavioral Ecology class at UCLA, I walked into the classroom bearing an impossibly difficult exam. Rather than being neatly arranged in alternate rows with pen or pencil in hand, my students sat in one tight group, with notes and books and laptops open and available. They were poised to share each other's thoughts and to copy the best answers. As I distributed the tests, the students began to talk and write. All of this would normally be called cheating. But it was completely OK by me. Selecting a Digital Curation Tool by David Kelly “Most of the digital curation tools available today have robust functionality that is available completely free. There’s no investment (other than time) required to test different tools and find the one that works best for you.” In today’s world of ever-growing digital content there is a seemingly infinite amount of information available.

About An overview of Kodu. (Click to play) Kodu lets kids create games on the PC and Xbox via a simple visual programming language. Kodu can be used to teach creativity, problem solving, storytelling, as well as programming. Anyone can use Kodu to make a game, young children as well as adults with no design or programming skills. Learning Analytic for Digital Game-Based Learning There is an overlooked opportunity in games – big data generated in the interactions through gaming. Game based learning is great, it’s learning-by-doing with lower costs in many cases, it’s focused on problem solving, it improves students motivation. But when we suggest teachers to use serious games to teach their students, the first question that it comes to their minds is: “Well, I like the idea, but… How do I assess this?”, or “How do I know it works for everyone?” Learning Analytics for Serious Games should step in now. Actually it’s another data mining process, quotes from the post from Games and Learning Alliance(GALA):

Secure streaming with Wowza Complete URL obfuscation with Wowza server standalone demo The Wowza Media Server supports secure streaming out-of-the-box. It also has the added benefit over HTTP that you cannot see the requested video URL using commonly used browser debuggers such as Firebug. This example uses the Wowza streaming server together with our secure streaming plugin. Why Kids Should Make the Video Games They Love to Play When educator Lynn Koresh hears from kids that they want a career doing something with computers, she asks, “To do what with computers?” Adults often encourage kids to pursue science, technology, engineering and math (STEM) skills, and computing classes are usually a first stop. But Koresh knows it’s the real-world applications of computational thinking and coding language skills that bring such knowledge to life.

RTMP Security The streaming media industry recognizes that RTMPS with the proven security of a secure socket layer (SSL) is more secure than RTMPE in securing both live and on-demand video streaming. To meet this demand for more secure streaming Wowza® is offering its free RTMPS StreamLock™ AddOn. Making Games: The Ultimate Project-Based Learning Part 6 of MindShift’s Guide to Games and Learning. As game-based learning increases in popularity, it’s easy to get pigeon-holed into one particular way of thinking about it or one way of employing it. This is true regardless of how teachers feel about gaming in the classroom, whether they’re for or against it. One common objection to game-based learning is that students will sit in front of screens being taught at. Sure, games are interactive, but on some level, don’t they still just replace the sage on the stage with the sage on the screen? Does a joystick really change the nature of pedagogy?