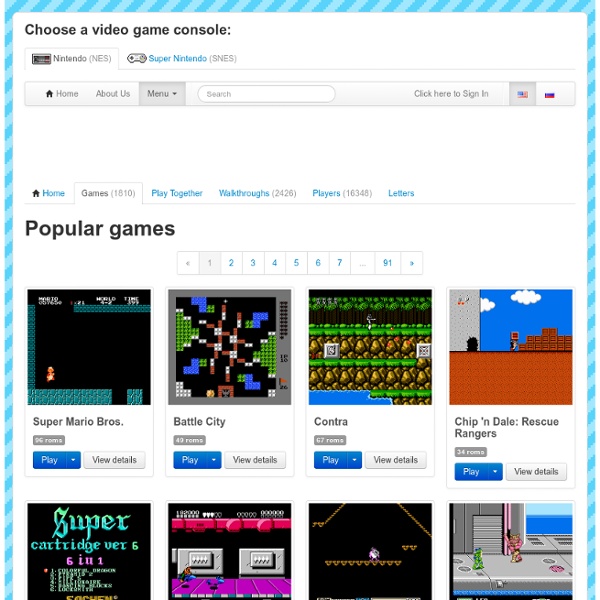 Top 10 Games You Never Played I have a confession to make: I haven't played every game ever made. I also seriously doubt I shall ever accomplish such a task, but I can safely say that my tastes generally skew a little from the norm. As such, the following is a list of my ten favorite games that I seriously feel too few people have played. Free Racing, Simulation Games (Page 2) Dirchie Kart Dirchie Kart is one for fans of Mario Kart and other fun racing games. Clearly inspired by the Nintendo classic and other games of the 16-bit period, the player races against... Driving Speed 2 Free online play. Classic video games online. Play FREE Arcade games! 1980s Shockwave, Flash, Java and DOS classic games for your PC. Brought to you by Triplets and Us Free Play Classic 80's Arcade Games FreeEnjoy your favorite video games and remember the great decade that was and still is the 80's.Best of all, NO tokens required to play these free video games! (Alphabetical listing of all our online games) New Buy Your Favorite 80's Video Games for Windows Online New

The best free PC games Looking for the best free PC game? Whether you’re broke or just frugal, free is a price point that appeals to everybody’s purse. We’ve collated the top free games on PC guaranteed to deliver a near endless stream of complementary entertainment. All you need to spend is your time. From military to sci-fi to fantasy, from MMOs to block-builders to card battlers, it turns out that zero can buy you quite a lot in the F2P game world – and that some classics are available at the steepest possible discount.

Consolas de videojuegos Juegos clásicos de consolas del siglo XX The Atari 2600 is a video game console released in September 1977 by Atari, Inc. It is credited with popularizing the use of microprocessor-based hardware and ROM cartridges containing game code, a format first used with the Fairchild Channel F, instead of having non-microprocessor dedicated hardware with all games built in. The console was originally sold as the Atari VCS, for Video Computer System. Following the release of the Atari 5200, in 1982, the VCS was renamed "Atari 2600",... Honda CL 360 - 'Willow' - Pipeburn - Purveyors of Classic Motorcycles, Cafe Racers & Custom motorbikes “So why did you name the bike Willow?” This is the first question we asked Troy Helmick, the builder of this amazing bike. “Willow trees are strong but fluid” he replied. Very zen, sensei Helmick. Troy is a retired photographer who now runs an Alpaca farm in West Virginia.

100 Of The Best Free Online Flash Games Topics: 100 of The Most Popular Flash Games , Best Casual Games , Best Games of 2011 , Browser Games , Top Online Games Hey guys, I must have spent countless hours playing games this summer.. Through all the games I played and were recommended to me, I thought I would like to share a list with all of you. I gathered the top 100 online flash/casual games and made a list. The following games are some that went viral. Temtem on Steam Temtem is a massively multiplayer creature-collection adventure inspired by Pokemon. Every kid dreams about becoming a Temtem tamer; exploring the six islands of the Airborne Archipelago, discovering new species, and making good friends along the way. Now it’s your turn to embark on an epic adventure and make those dreams come true. Catch new Temtem on Omninesia’s floating islands, battle other tamers on the sandy beaches of Deniz or trade with your friends in Tucma’s ash-covered fields. Defeat the ever-annoying Clan Belsoto and end its plot to rule over the Archipelago, beat all eight Dojo Leaders, and become the ultimate Temtem tamer!