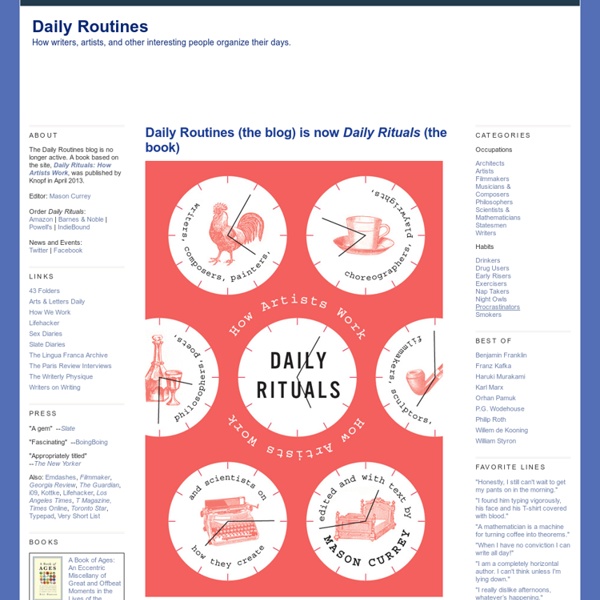 Nearly every morning of his life, Mister Rogers has gone swimming, and now, here he is, standing in a locker room, seventy years old and as white as the Easter Bunny, rimed with frost wherever he has hair, gnawed pink in the spots where his dry skin has gone to flaking, slightly wattled at the neck, slightly stooped at the shoulder, slightly sunken in the chest, slightly curvy at the hips, slightly pigeoned at the toes, slightly aswing at the fine bobbing nest of himself... and yet when he speaks, it is in that voice, his voice, the famous one, the unmistakable one, the televised one, the voice dressed in sweater and sneakers, the soft one, the reassuring one, the curious and expository one, the sly voice that sounds adult to the ears of children and childish to the ears of adults, and what he says, in the midst of all his bobbing-nudity, is as understated as it is obvious: "Well, Tom, I guess you've already gotten a deeper glimpse into my daily routine than most people have."

Conscientious Articles Contemporary Photographers Diane Meyer May 6, 2013 – According to the artist, Diane Meyer’s Time Spent That Might Otherwise Be Forgotten “is based on photographs taken at various points in my life and arranged by location. 10 simple ways to save yourself from messing up your life - Step Stop taking so much notice of how you feel. How you feel is how you feel. It’ll pass soon. What you’re thinking is what you’re thinking. It’ll go too.

7 Secrets of the Super Organized A few years ago, my life was a mess. So was my house, my desk, my mind. Then I learned, one by one, a few habits that got me completely organized. HMAb — HeatherMortonArt buyer One of my favourite things about this show is that it includes so much variety. Subject matter, technique and of course style- the show is a lovely mixture. Plus, it represents photographers in very different places in their careers. Established shooters like Lee Towndrow are showing fantastic work that warrants more attention. Top 10 Ways Your Brain Is Sabotaging You (and How to Beat It) @Firesphere: Not that I don't believe you, but do you have a source for that? @inverts: I did, it was an article on a Dutch website. I'm searching for an English source.

Increase your productivity at work by letting go of negative men My alma mater is currently ranked number one in all of the college men’s basketball rankings. They’ve been in the top spot for 11 of the 14 weeks of the polls, and were number one in the preseason. There are five games left in the regular season, and all of the teams Kansas has left to play would love to see the Jayhawks lose. Colorado, Oklahoma, Oklahoma State, Kansas State, and Missouri fans aren’t the only ones who want to see Kansas mess up their record in the last five games. Fans of the other ranked teams would be happy to see Kansas take a tumble, and, after watching some of the games this year, I’m pretty certain there are a few referees that would be glad to see Kansas lose, too.

How Hans Christian Andersen Revolutionized Storytelling, Plus the Best Illustrations from 150 Years of His Beloved Fairy Tales by Maria Popova “Andersen had the ability to articulate desires petty and profound and make them into transcendent tales.” “When people talk listen completely,” Hemingway counseled in his advice on how to be a writer. More than a century earlier, a little boy in Denmark, born into poverty to a shoemaker father and an illiterate washerwoman mother, was spending his days listening to the old women in the local insane asylum as they spun their yarn and spun their tales to pass the time. This unusual hub of peasant storytelling in the oral tradition of folklore became his laboratory for listening, out of which he would later concoct his own stories — stories beloved the world over, which have raised generations of children into a whimsical world of imaginative play. Hans Christian Andersen thus used that singular talent of listening to lift himself out of poverty and into international celebrity, becoming one of history’s greatest storytellers and the patron saint of the fairy tale genre.

How to Mark a Book How to Mark a Book This outline addresses why you would ever want to mark in a book. For each reason, the outline gives specific strategies to achieve your goals in reading the book. 11 Amazing Thank You Notes From Famous People After a short stint in the New York theater world, comedienne Carol Burnett landed a job as a regular on The Garry Moore Show in 1959. She caught the attention of CBS executives, who offered her her own series in 1967. With her husband Joe Hamilton at the helm, Burnett broke new ground as the first female host of a TV variety show. The Carol Burnett Show ran for 11 seasons and earned a handful of Emmy Awards in the process. To celebrate the legendary comedienne's 85th birthday, here are some fun facts about the show and the folks who made it so side-splittingly hilarious.

Pixar's 22 Rules of Storytelling and How They Apply to Software Development Well, Half of Them. Let's Keep This Reasonable. Filed Under: NEWS: Technology Earlier this year, Emma Coates, Pixar's Story Artist, individually tweeted twenty two guidelines for story writers. Mindfulness (psychology) Mindfulness as a psychological concept is the focusing of attention and awareness, based on the concept of mindfulness in Buddhist meditation.[1] It has been popularised in the West by Jon Kabat-Zinn.[2] Despite its roots in Buddhism, mindfulness is often taught independently of religion.[3][4] Clinical psychology and psychiatry since the 1970s have developed a number of therapeutic applications based on mindfulness for helping people suffering from a variety of psychological conditions.[5] Several definitions of mindfulness have been used in modern psychology.