A History of Home Video Games from Atari to Xbox, Playstation and Wii 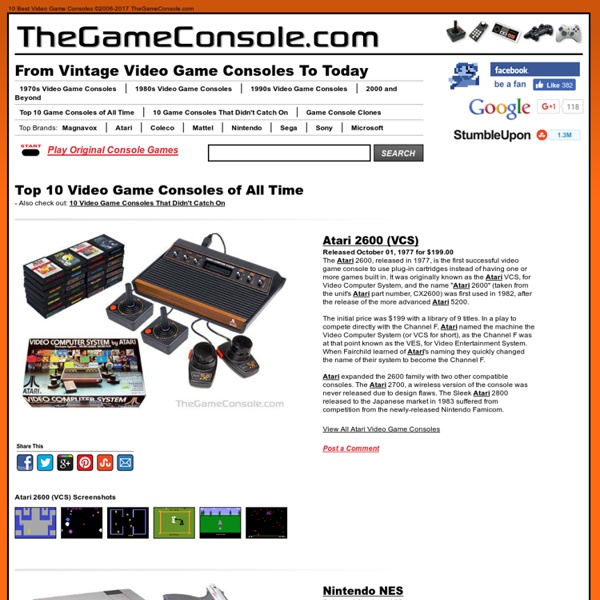 Six Amazing Songs That Illustrate What it Means to Be Human | Raptitude.com Music produces a kind of pleasure which human nature cannot do without. ~Confucius I just took a look at CNN’s site and it was, as usual, boasting its favorite palette of troublesome nouns and verbs. Terror, death, murder, destruction, Bush. No, these ‘news’ items aren’t new. Linguistic and cultural barriers keep us from recognizing these two universal similarities in others, but there is a human invention that can circumvent all that. I find it fascinating, but also completely unsurprising, that music has developed in every single human culture. Music unites us by telling stories with which we can all identify. I’ve compiled a short list of songs that, to me, embody the universal theme of what it means to be a living, breathing, loving and hurting human being. Before you listen I have two requests. First, I politely ask that you don’t ‘scan’ the songs, listening for a few seconds and then skipping to the next one. And secondly, turn up the volume. We’ll start off with something familiar.

Happy Japanese Kirby, Angry American Kirby Posted on Monday, May 5 @ 17:55:46 Eastern by Duke_Ferris Seriously, is it something in our water supply? Do the Japanese think that when Kirby comes to America, he suddenly gets angry and belligerent? Possibly even Xtreme? I am U.S. Kirby! Kirby Air Ride Kirby and the Amazing Mirror Kirby: Canvas Curse Kirby: Nightmare in Dream Land Kirby Squeak Squad

cole rise 4 Brilliant Remarks From History’s Wisest American | Raptitude.com If I have a hero, it’s Ralph Waldo Emerson. He represents to me humanity’s potential: wise, self-reliant, honest, unencumbered by conformity, and able to enjoy every little detail of life as if they were all miracles. He possessed the hallmark of a human being ahead of his time: he was hailed as a genius and simultaneously reviled as a subvert. I am convinced that all of the secrets to personal peace and freedom reside within the ideas recorded in Emerson’s essays and lectures. Perhaps this is why he is so widely quoted and so scarcely read. It’s worth the effort. “People seem not to see that their opinion of the world is also a confession of their character A person’s opinion of the world they live in really seems to be a foolproof litmus test for their strength of character. The wisest people I know invariably revere the world, and the most ineffective ones hate it. I have been on both sides. “There is an optical illusion about every person we meet “I hate quotations. And my favorite:

A Girls Letter For Her Mother « Love, Emotional, Traditional & Friendship SHAYARI A mother passing by her daughter’s bedroom was astonished to see the bed was nicely made and everything was picked up. Then she saw an envelope propped up prominently on the center of the bed. It was addressed, “Mom.” With the worst premonition, she opened the envelope and read the letter with trembling hands: Dear Mom: It is with great regret and sorrow that I’m writing you. Your daughter, Judith PS: Mom, none of the above is true. Rate this: i 3 Votes Like this: Be the first to like this.