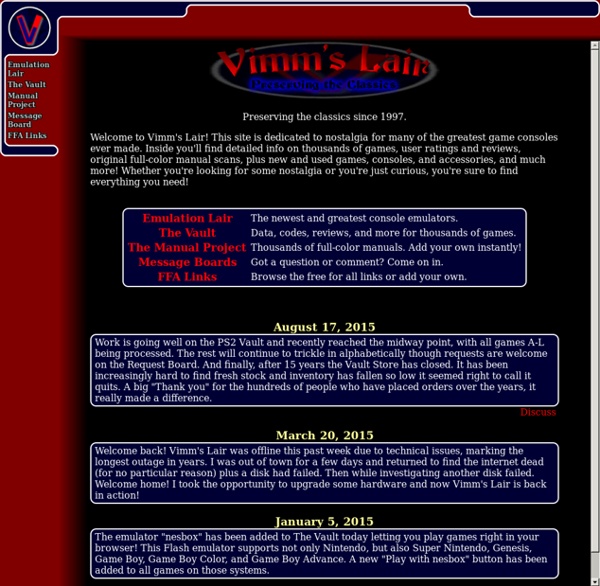 Time for a behind the scenes update at Vimm's Lair. First off a disk that was acting up for several months has finally been replaced. Vimm's Lair was down for several evenings and a full day while the belligerent disk was interrogated. It eventually cracked though many manuals and screen shots were lost. Most are backed up and are being gradually restored. The Vault has been updated with loads of publisher and serial data courtesy of GameFaqs.

List of Nintendo 64 games The Nintendo 64 Nintendo 64 cartridges. From left to right; Super Mario 64 (the system's best selling game), the reverse of a USA/Canada, a PAL region, and a Japanese region game, (note the identical tabs near its bottom edge). Demise - Zelda: Skyward Sword Wiki Guide Hold up, buddy. To edit this page, you'll need a username. (It's free and only takes a sec.) Demise is the final boss of Skyward Sword, and the figure Ghirahim has been trying to revive. Demise is first seen in a different form, as a creature called "The Imprisoned". He is located in the Sealed Grounds, and Link must defeat him early on in the game, along with having seen many nightmares of the beast.

Musical scale The frequencies 440Hz and 880Hz both correspond to the musical note A, but one octave apart. The next higher A in the musical scale would have the frequency 1760Hz, twice 880Hz. In the western musical scale, there are 12 notes in every octave. These notes are evenly distributed (geometrically), so the next note above A, which is B flat, has frequency 440 × β where β is the twelfth root of two, or approximately 1.0595. Pac-Man (walkthrough) Level 1 Level 2 Level 3 Level 4 You Decide: Ocarina of Time vs. Skyward Sword Off-Site: Cast Your Vote on IGN's YouTube Network Welcome to Versus. A video series where we pit two games against each other and let you decide who the winner is. Perhaps there is no debate greater than that which compares The Legend of Zelda: Ocarina of Time to any other game in the Zelda franchise. With the release of Skyward Sword, we want to know if you think that this game finally surpasses the greatness that is Ocarina of Time.

Top 10 Free Ways To Discover New Music Online – Eternal Code [via makeuseof.com] Bored with your music and want to discover some new bands or singers? There are two main ways you can do that online. You can use services which create music maps, allowing you to explore artists similar in genre to the artists you already listen to.

Mass Effect 3 Weapons Guide: The Best Guns For The Right Characters Get into our Mass Effect weapons guide to figure out the best weapons for your character in . Learn which weapons are best for the different roles and learn how effectively use them on the battlefield. Now due note, that DLC and Collector's Edition guns are not included in this guide because not everyone has the money to spend for extra weapons. Assault Rifles - M-76 Revenant Submachine Guns - M-9 Tempest Heavy Pistols - M-6 Carnifex

E-mails from an Asshole Tutorials/Setting up a server This tutorial takes you through the steps of setting up your own server using the default server software that Mojang distributes free of charge. The software may be installed on most operating systems, including Windows, Mac and Linux. Regardless of your operating system, you must begin by downloading the server software from the minecraft download page. The server is available as either a Java .jar file or a Windows .exe file. The .exe version may seem easier to use, but in case of problems the .jar version gives better error messages and it is more configurable.

Yup. Unfortunately. I noticed that myself. I'd have to say early nineties, but, still. by ericalomberk Sep 13

"Preserving the Classics Since 1997" by maptheweb Sep 2