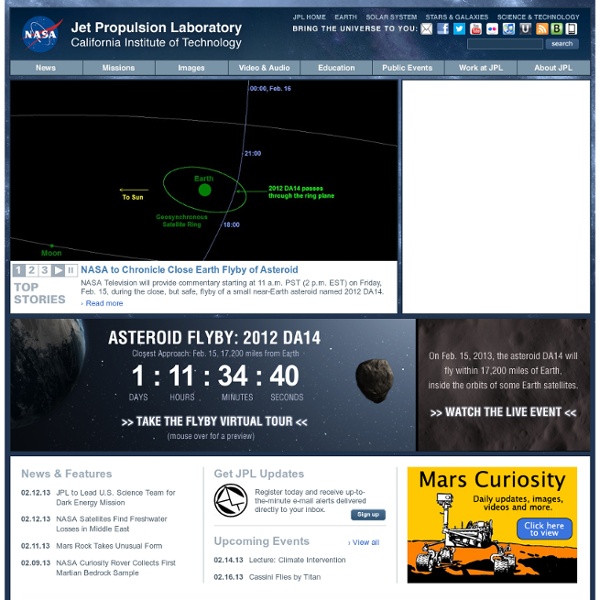 Universe in a box: formation of large-scale structure The movie stills pictured above illustrate the formation formation of clusters and large-scale filaments in the Cold Dark Matter model with dark energy. The frames show the evolution of structures in a 43 million parsecs (or 140 million light years) box from redshift of 30 to the present epoch (upper left z=30 to lower right z=0). Click to see the full-resolution version of each panel. At the initial epoch (z=30), when the age of the Universe was less than 1% of its current age, distribution of matter appears to be uniform. You can download the movie as an MPEG movie: full size (10Mb), half size (1.3Mb) The same simulation but with a rotating box (3D geometry of the filaments can be appreciated better) an animated gif: half size (5Mb), quarter size (1Mb) MPEG movie: full size (9Mb) half size (1Mb)

Hallo northern sky planetarium software program Planetarium program HNSKY version 3.2.1 (63 MB, containing both 32 bit and native 64 bit version dated 2016-2-4) with new powerful animation menu. Hallo Northern Sky" or HNSKY is a full feature planetarium program for Windows. Free with 30.000 deep sky objects and the TYCHO2++ 4.5 million star database up to magnitude 12.5. After downloading the GSC 1.2 or the USNO UCAC4 it displays stars up to magnitude 16. The Sun, Moon, the planets and their major moons are all displayed with surface features. In can control almost any telescope using the ASCOM interface program. Downloading of additional DSS images via the internet is fully integrated. The comet or asteroid database can be updated online with just one click. Online database search for objects in the selected area. Numerical integration for asteroids to achieve highest accuracy positions years in the future or past. In version 3.02 a significant menu change was introduced. New horizon:

Galaxy Photography, Images by Jason Ware Star Journey @ nationalgeographic.com Stars are cosmic energy engines that produce heat, light, ultraviolet rays, x-rays, and other forms of radiation. They are composed largely of gas and plasma, a superheated state of matter composed of subatomic particles. Though the most familiar star, our own sun, stands alone, about three of every four stars exist as part of a binary system containing two mutually orbiting stars. No one knows how many stars exist, but the number would be staggering. Yet on a clear, dark night Earth's sky reveals only about 3,000 stars to the naked eye. Appearance Some stars have always stood out from the rest. Stars in the heavens may also appear to be different colors because their temperatures are not all the same. Stars may occur in many sizes, which are classified in a range from dwarfs to supergiants. Hydrogen is the primary building block of stars. Life Cycle Young stars at this stage are called protostars. Stars evolve over billions of years.