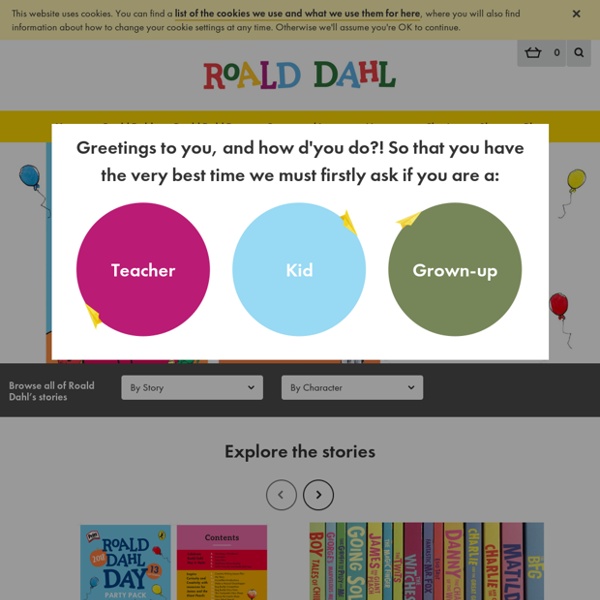 Scriptorium - Angela Carter By Jeff VanderMeer Angela Carter (1940-1992) Essay I. kids stories,stories for kids, children's stories Play the Story Retell Game using framework anchors: A great way to teach kids to retell a story using shapes which are moved over text in order to find characters, setting , problem, solution and story events. A fun interactive game to teach story retell. Play the Story Recount Game : A great way to teach kids to write a recount about an event. Kids read a story then put the sentences back in order in a game atmosphere.

Mem Fox Picture me flat on the floor in a star shape: that’s where I am. I’ve been working for many months with my website designers (massive applause for Enee Solutions) to update the site and make it as friendly and fascinating as possible. I hope you’ll love it. It will be updated every four weeks. I hope you’re having hide-and-seek fun with my latest book: YOO HOO, LADYBIRD! Authors and Illustrators of Children's Books Where Teachers Come First bookwizardMy Book Lists GO Instant access to reproducibles

Volsunga Saga Online Medieval and Classical Library Release #29 Here begins the tale, and tells of a man who was named Sigi, and called of men the son of Odin; another man withal is told of in the tale, hight Skadi, a great man and mighty of his hands; yet was Sigi the mightier and the higher of kin, according to the speech of men of that time. Now Skadi had a thrall with whom the story must deal somewhat, Bredi by name, who was called after that work which he had to do; in prowess and might of hand he was equal to men who were held more worthy, yea, and better than some thereof. Go to Chapter II

Jason Fry I’m the author of The Jupiter Pirates space-fantasy saga for young adults, published by HarperCollins. The series begins with The Jupiter Pirates: Hunt for the Hydra, then continues with Curse of the Iris. The third novel, The Rise of Earth, is on the way … with more to come. The Jupiter Pirates is part high-seas adventure and part space-age epic — a saga about a solar system on the brink of war and one family caught in the middle of it. It’s technically a middle-grade book (for ages 8 to 12) but I promise older readers will like it too. Here’s the elevator pitch: De boeken van Isaac Asimov * De goden zelf - The gods themselves * Dood in het lab - A whiff of death * Het einde van de eeuwigheid - The end of eternity * Nemesis - Nemesis * Ondergang - Nightfall * Positronisch brein - The bicentennial man * Proefkind - Child of time * Reisdoel: menselijk brein - Fantastic voyage * Zelfs de goden - zie De goden zelf Vroege werken - The early Asimov aka Eleven years trying De dreiging van Callisto - periode 1939/1940 - The Early Asimov Volume 1Het superneutron - periode 1940/1941 - The Early Asimov Volume 2De rode koningin - periode 1941/1948 - The Early Asimov Volume 3 Verhalenbundels

KS2 Literacy Different types of words can be used to make your writing more interesting and easier to read. You need to know when to use them and how to spot them. In writing, words are grouped together into phrases, sentences, clauses and paragraphs. Linking these building blocks together in the right way makes your writing easy to understand and interesting to read. Brandon Mull Attention Apprentice Caretakers! You may have read about centaurs and satyrs, fairies and fog giants. But have you actually seen them? Isaac Asimov Welcome to the Isaac Asimov Home Page. Here you'll find a comprehensive collection of resources pertaining to Isaac Asimov (1920-1992), the quintessential author, who in his lifetime wrote over 500 books that enlightened, entertained, and spanned the realm of human knowledge. The Isaac Asimov FAQ The FAQ for the Usenet newsgroup alt.books.isaac-asimov provides answers to the frequently asked questions about Isaac Asimov, and is an excellent place to start if you have questions about him. Included is biographical information about both his personal life and his literary life, answers to questions about the Foundation and Robot series, and more.

About The Author Barbara Park was best-known as the creator and author of the New York Times bestselling Junie B. Jones series, the stories of an outrageously funny kindergartener who has kept kids (and their grownups) laughing—and reading—for over two decades. Published by Random House Books for Young Readers, the series has sold over 60 million copies in North America alone, has been translated into multiple languages and is a beloved and time-honored staple in elementary school classrooms around the world. The series was consistently a #1 New York Times bestseller, spending over 180 weeks on the list, and Barbara and her books were profiled in such national outlets as Time, Newsweek, USA Today, The New York Times, and Today. Park died on Friday, November 15, 2013 after fighting ovarian cancer heroically for seven and a half years. Barbara Park arrived at the writing profession through an indirect route.