Articles intermediate and above

Make Your Own Luck. Mary McGuire-Wien and her husband, Charles Wildbank, had been searching for a new home on Long Island for more than a year, but every place they'd seen was either unsuitable or unaffordable. 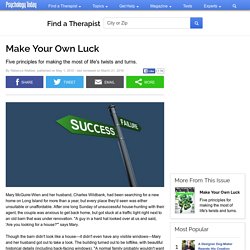 After one long Sunday of unsuccessful house-hunting with their agent, the couple was anxious to get back home, but got stuck at a traffic light right next to an old barn that was under renovation. "A guy in a hard hat looked over at us and said, 'Are you looking for a house? '" says Mary. The Luck Factor. Sometimes Confusion Is A Good Thing : 13.7: Cosmos And Culture. Confusion gets a bad rap. 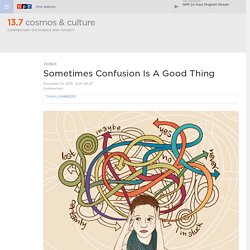 A textbook that confuses its readers sounds like a bad textbook. Teachers who confuse their students sound like bad teachers. But research suggests that some of the time, confusion can actually be a good thing — an important step toward learning. Consider a 2004 study in which participants learned basic computer literacy from an automated tutoring system. As they worked through the lessons, researchers coded which of several emotions they seemed to exhibit, including confusion and boredom.

My Life Report: Things Done Well, Things Done Less Well. Build Academic English Skills Before Arriving at a U.S. College. It is not a new topic to discuss how to improve language skills before studying abroad in the U.S. 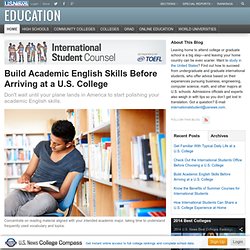 Watching English-language TV episodes and movies, chatting with foreign friends and even spending some time in English-speaking countries such as the U.S., U.K. or Australia are all helpful ways for nonnative English speakers to improve their skills However, when international students actually arrive on campus and sit in a classroom, they might find it still very difficult to communicate with professors and classmates. They might need extra effort to improve academic English. Powerful Ideas, Practical Actions. Keys to Persuading Your Audience. Whether you’re trying to negotiate a pay raise or convince your coworkers to help out with a project, being able to persuade others is key in getting the results you want. 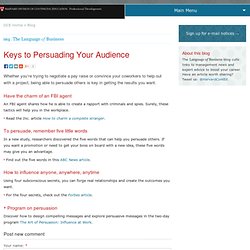 Have the charm of an FBI agent An FBI agent shares how he is able to create a rapport with criminals and spies. Surely, these tactics will help you in the workplace. Read the Inc. article How to charm a complete stranger. To persuade, remember five little words In a new study, researchers discovered the five words that can help you persuade others. Find out the five words in this ABC News article. How to influence anyone, anywhere, anytime. Gaming kids better at English: study. Young gamers playing 'World in Warcraft' in Stockholm. 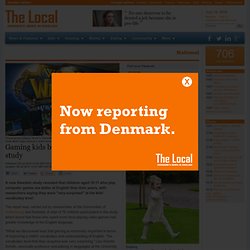 The game was cited by researchers as one those which helps improve a child's level of English. Claudio Bresciani/TT A new Swedish study revealed that children aged 10-11 who play computer games are better at English than their peers, with researchers saying they were "very surprised" at the kids' vocabulary level. Sometimes Negative Feedback is Best - Heidi Grant Halvorson. By Heidi Grant Halvorson | 8:00 AM January 28, 2013 If I see one more article or blog post about how you should never be “critical” or “negative” when giving feedback to an employee or colleague (or, for that matter, your children), I think my head will explode. 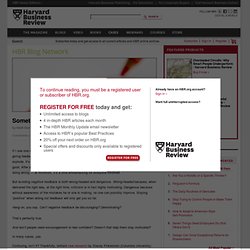 It’s incredibly frustrating. This kind of advice is surely well meant, and it certainly sounds good. After all, you probably don’t relish the thought of having to tell someone else what they are doing wrong — at minimum, it’s a little embarrassing for everyone involved. But avoiding negative feedback is both wrong-headed and dangerous. Hang on, you say. And don’t people need encouragement to feel confident? In many cases, yes. Confusing, isn’t it? It’s important to begin by understanding the function that positive and negative feedback serve. Given these two different functions, positive and negative feedback should be more effective (and more motivating) for different people at different times.

Duke Grad Student Secretly Lived In a Van to Escape Loan Debt. By the time Ken Ilgunas was wrapping up his last year of undergraduate studies at the University of Buffalo in 2005, he had no idea what kind of debt hole he'd dug himself into. He had majored in the least marketable fields of study possible — English and History — and had zero job prospects after getting turned down for no fewer than 25 paid internships. "That was a wake-up call," he told Business Insider. "I had this huge $32,000 student debt and at the time I was pushing carts at Home Depot, making $8 an hour. I was just getting kind of frantic. " Back then, student loans had yet to become the front page news they are today. England 'divided into readers and watchers' 10 March 2014Last updated at 21:43 ET By Hannah Richardson BBC News education reporter Richer families have more books, the report said.

England is suffering from a "worrying cultural divide" with poor adults much less likely to read books than their richer neighbours, a report says. The country is divided into two nations, those who read weekly or daily, and those who prefer TV and DVDs, it says. It finds key links between an individual's social background and how likely they are to read. The research, from charity Booktrust, is based on a survey of 1,500 adults.