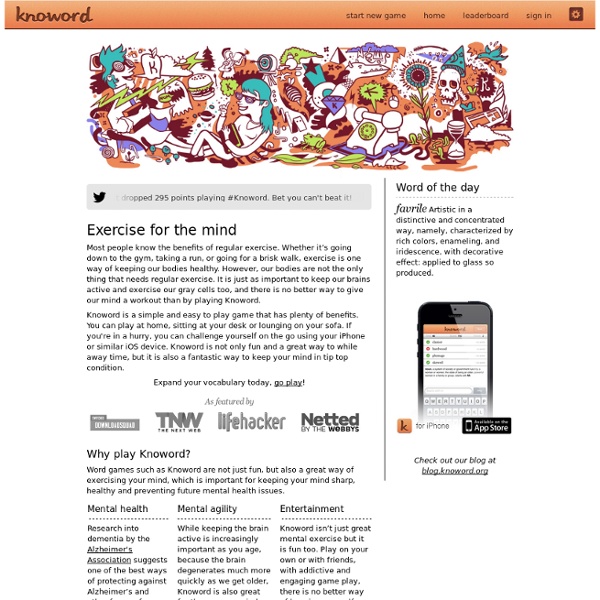 @liamonpie : @sighkian go to sleep thts what im gna do or u can read larry smut http://t.co/i8rYfjwVNn or play this its addictive http://t.co/2ZWzzO9V03 Most people know the benefits of regular exercise. Whether it’s going down to the gym, taking a run, or going for a brisk walk, exercise is one way of keeping our bodies healthy. However, our bodies are not the only thing that needs regular exercise. It is just as important to keep our brains active and exercise our gray cells too, and there is no better way to give our mind a workout than by playing Knoword. Knoword is a simple and easy to play game that has plenty of benefits.

Smile Into Your Organs: “A smile is an inexpensive way to improve your looks” Charles Gordy I love the idea that smiling is used as a healing and meditation practice by many ancient cultures. Taoists believe that holding a smile on your face and directing it inwards towards your organs and inner body, is the key to good health and longevity. Traditional Balinese healers know that a smile washes away bad energy and recommend smiling meditation as a simple way to calm the mind and bring health to the soul. Khan Academy Boomshine Update 2.27.14 Boomshine is now available for free on Android. Feature achievements and live wallpaper! Update 3.24.12 My new word game Yofi is now available for IPhone and IPad on the Apple App Store, and it's also available on the Android on the Android Market. Update 10.16.09 Check out my new game with a similar feel to Boomshine.

Woman Imagine a woman who believes it is right and good she is a woman. A woman who honors her experience and tells her stories. Who refuses to carry the sins of others within her body and life. Activate Your Mind! Cured 1 | 2 | 3 | 4 | 5 | Next > [Editor's Note: Since we conducted and posted this interview in 2009, there have been many developments in the story of Timothy Ray Brown, formerly known only as the "Berlin patient." In addition to this article, we encourage you to read "Tentative HIV 'Cure' Presents a Guarded Sense of Hope" for an update on Brown's condition as of late 2010, as well as the perspectives of two of our HIV-positive bloggers -- Ibrahim (who is encouraged by Brown's story) and Thomas DeLorenzo (who remains more skeptical).] Up until now, we've never been able to say that a person infected with HIV/AIDS has been cured.

survivalbiz.com Step 7. Take the bottom piece of the can and start to ruffle the perimeter of the can with your thumb. (Figure 10.) You don’t want creases, just ruffles. These ruffles are to allow the top portion of the can to fit over the bottom portion easily. Step 8. Amazing Places To Experience Around The Globe (Part 1) Preachers Rock, Preikestolen, Norway Blue Caves - Zakynthos Island, Greece Skaftafeli - Iceland Plitvice Lakes – Croatia Crystalline Turquoise Lake, Jiuzhaigou National Park, China Four Seasons Hotel - Bora Bora The gargantuan mountain of cash that separates the rich from everyone else Below (center pic) is a diagram representing the different annual income levels of all Americans in stacks of cash. At the very top are the super-rich (see the tiny box?). At the bottom are the poor and the 'middle-class' (see the little box in the lower corner?). Everything in-between is inhabited by various ranks of millionaire.

Religious Experiences Shrink Part of the Brain The article, “Religious factors and hippocampal atrophy in late life,” by Amy Owen and colleagues at Duke University represents an important advance in our growing understanding of the relationship between the brain and religion. The study, published March 30 in PLoS One, showed greater atrophy in the hippocampus in individuals who identify with specific religious groups as well as those with no religious affiliation. It is a surprising result, given that many prior studies have shown religion to have potentially beneficial effects on brain function, anxiety, and depression.

The Egg Author's Note: The Egg is also available in the following languages: The Egg By: Andy Weir You were on your way home when you died. Still Looking For Paradise? Maldives - justpaste.it - StumbleUpon Double chain of twenty-six atolls… The Republic of Maldives, or simply the Maldives, is an island nation in the Indian Ocean. It consists of approximately 1,190 coral islands grouped in a double chain of 26 atolls, along the north-south direction, spread over roughly 90,000 square kilometers, making this one of the most disparate countries in the world. The atolls are composed of live coral reefs and sand bars, situated atop a submarine ridge 960 kilometers long that rises abruptly from the depths of the Indian Ocean and runs from north to south. Crystal clear waters, beautiful white sand beaches, swaying palm trees and fabulous dive sites – that’s why the Maldives, is known for being one of the best tropical holiday destinations in the world.